One of the world’s most sought after cognacs is Remy Martin’s trademark, Louis XIII, and what makes it special is the number of years and the generation of cellar masters it takes to make just one bottle, writes Solomon Elusoji

It is true that everybody loves a good drink, whether it is a bottle of water or a glass of wine. But why would someone walk into a shop and decide to buy a drink that sells for around two to four thousand dollars per bottle?
That’s the question that comes to mind on a first meeting with Remy Martin’s cognac, Louis XIII, which is popularly referred to as one of the world’s most sought after cognacs.

To be clear, Cognac is a type of brandy that is derived from wine. But it is not just a drink. It is also a town in South-western France. The interesting part is that, by French law, the Cognac drink can only be made in Cognac and its surrounding regions. All of the grapes that eventually end up in a bottle of Cognac must come from the region’s six zones, or it isn’t Cognac. The French take these laws very seriously. It has been said that making Cognac is more tightly regulated than building a nuclear reactor or using the internet in North Korea.

Like all wine, Cognac starts with grapes, and nearly the entire Cognac region is planted with the Ugni Blanc or Trebbiano grape. Each of the Cognac’s six zones produces grapes with differing qualities, and the wine from which the Remy Martin Cognac is made comes only from the top two areas of the Cognac region, Grande Champagne and Petite Champagne. The grapes are pressed, the resulting juice fermented into wine, and that’s then distilled to make clear, raw brandy — what the French call eau de vie, or “water of life.”

This is where it gets more interesting. Louis XIII is blended from around 1,200 different eaux-de-vie (gotten from the Grande Champagne) that’s been matured in French oak barrels for years, ranging from 40 years to 100 years. Since every eaux-de-vie has to be independently analysed for quality assurance at different stages of the production, that’s 1,200 taste tests, re-barreling, re-cellaring, testing, blending, and doing it all again, for around four generations, by people who have been termed the “best in the business” in the only place in the world it can be done, for over 100 years.

Raw scallops and unripe pear represent Louis XIII’s first year of production, where its deep, amber colour actually begins with a grossly tart white grape—often the ugni blanc variety—which is double-distilled in oak barrels to create an eaux-de-vie. As the years progress, different eaux-de-vie brandies are added to the barrel, complicating flavours as depicted in the courses: veal tongue and butternut squash for age 20; walnut-milk soaked pork with raw button mushrooms for age 60. It is only after 1,200 eaux-de-vie notes are blended together over a century, before Louis XIII is poured into its container, a regal Baccarat crystal decanter. This decanter is handmade by the finest crystal makers, with a gold neck, making it not only an exquisite cognac but a collector’s item as well.

One sip of this drink, it has been said, produces a layer of complex, century-aged flavours: smoky oak wood, ripened figs, Cuban cigars, dried apricot, sweet vanilla — each sip transporting the sipper through 100 years of French history and a culinary tour of Cognac’s Grande Champagne.

“This is why we say that it is ‘one century in a bottle’,” Global Executive Director of Louis XIII, Ludovic du Plessis, told THISDAY, during an exclusive interview in Lagos. “We say that because each decanter takes four generation of cellar masters over 100 years to craft.”

Ludovic is a six-footer with a charming personality. Described as “a solid marketing professional with an unmatched business acumen and a strong sense of luxury and style”, he started his career as a sales intern at Louis Vuitton, in 1999, before moving to Dom Perignon and Moet Chandon, where he rose to become the Head of Global PR Development. In October 2014, he was appointed as the Global Executive Director of Louis XIII.

When discussing the Louis XIII, Ludovic wears an animated look, speaking excitedly with a deep, delightful French accent. He calls the drink, “the ultimate luxury spirit of the world”, because that was the original motivation for the drink’s creation in 1874, by the Remy Martin Family. And they called it Louis XIII, because when the family established themselves in the region of Cognac, it was under the reign of the King of France, Louis XIII.

“What is amazing is that each decanter takes four generation of cellar masters, 100 years to craft,” Ludovic said. “This is amazing. Today, I do not know any luxury brand in the world that can say they are working today for people that are not born yet. This is true luxury. The real luxury is time.

One amazing way that Louis XIII is stressing its “Real Luxury is Time” message is by creating a movie with John Malkovich, called “100 Years”. The movie was produced in Texas and was directed by Robert Rodriguez (Sin City, From Dusk Till Dawn, Machete). In November 2015, the movie’s trailer was premiered in Los Angeles, but would not be released to the public until 2115, 100 years later.

“We took the only copy of the film and placed it in a safe for the next 100 years,” Ludovic said. “No one can open the safe. When we closed the door, it started a countdown, and in 100 years, it will open by itself. I probably won’t be alive, but my kids would be there.”

The movie’s trailer has a tagline that reads “The Movie You Will Never See” and the whole point is to drive home the number of years and generation of expertise it takes to produce one decanter of Louis XIII.

“I have gotten a lot of requests from people who want to pay me money to see the movie,” Ludovic said. “One of my biggest clients told me ‘Ludo, you know how many decanters I buy every year, I will give you one million euros, I want to see the movie’. I told him no.”

But what really are the big challenges in creating and maintaining a steady line of Louis XIIIs. Ludovic says they are just two: finance and knowledge transfer.
“To do something like this,” he said, “the drink has to belong to a company that is very strong, in a financial sense, because you need to support production that you are not going to sell this year or the next. So you need to invest a lot.
“Then the other one is how you are going to transmit the production know-how? So you need to make sure that the present cellar masters find the next excellent cellar masters, and share the secrets.” 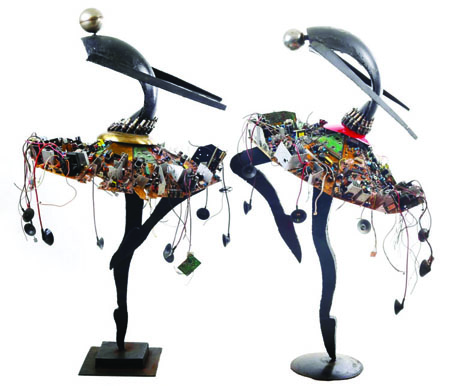