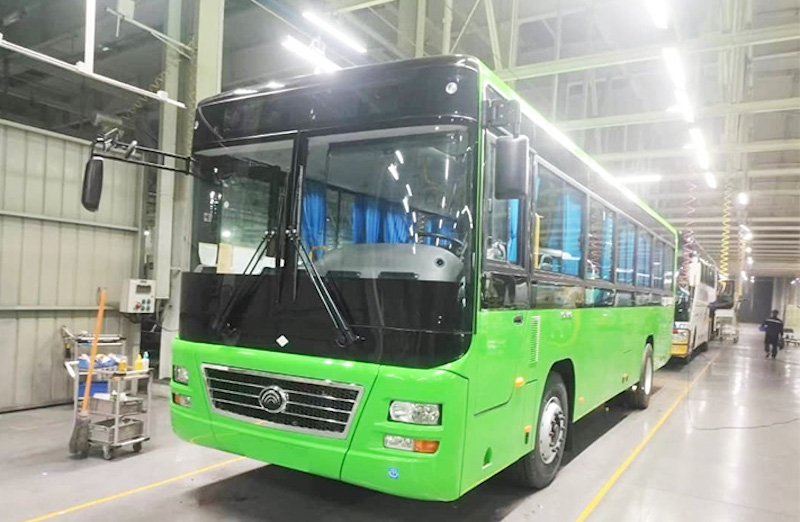 With the pump price of diesel hitting the roof top and cost of petrol creating deep holes in the balance sheet of transport operators and logistics providers, Kojo Motors, owners of Yutong range of buses has said it is providing cost effective alternatives to the motoring public with the planned introduction and exhibition of Yutong passenger buses powered by compressed natural gas (CNG) at the ongoing Abuja Motorfair holding inside the International Conference Centre annex, Abuja.

The CNG is a natural gas under pressure that remains clear, odourless and non-corrosive. Although vehicles can use natural gas as either a liquid or a gas, most vehicles use the gaseous form, compressed to about 218 kg/cm2. CNG can be used as an alternative to conventional petrol and diesel fuels.

According to the manufacturers of Yutong, the 10 meter CNG inter- and intra-city compressed natural gas commercial passenger bus is coming into the Nigerian market with numerous advantages. CNG is about 50 per cent cheaper than petrol.

In December 2020, the federal government rolled out its National Gas Expansion Programme (NGEP), which involves the conversion of fuel-powered cars and generators from petrol to gas.

The programme, which is expected to deliver at least one million vehicle conversions by the end of 2021 aligns with the government’s plan to make gas the first-choice source for cheaper and cleaner energy.

The need to switch from petrol to gas was necessitated by the deregulation of petrol by the government, which has led to increment in the domestic pump prices in recent times.

Recall that, the president at the 2021 Africa regional heads of government commonwealth roundtable chaired by the then Prince of Wales, now King Charles III, reminded the world of Nigeria’s plan to replace petrol with CNG.

While reiterating Nigeria’s commitment to a just transmission to net zero-emission, President Buhari who was represented by the vice president, Osibanjo, said, “We also have our Natural Gas Expansion Programme. This is where we are using Compressed Natural Gas (CNG) and Liquefied Petroleum Gas (LPG) in order to replace the use of Premium Motor Spirit (Petrol), and this is going on now, we are actually trying to fit and retrofit existing petrol stations so that the use of cleaner fossil fuels will replace it.”

Furthermore, the Nigerian Upstream Petroleum Regulatory Commission (NUPRC) (former Department of Petroleum Resources (DPR) is encouraging Nigerians to embrace the use of CNG in their automobiles as an alternative to petrol.

NUPRC (DPR) said the use of CNG, which is cheaper, safer, environment-friendly and in abundance in the country, would reduce the dependency on petrol.