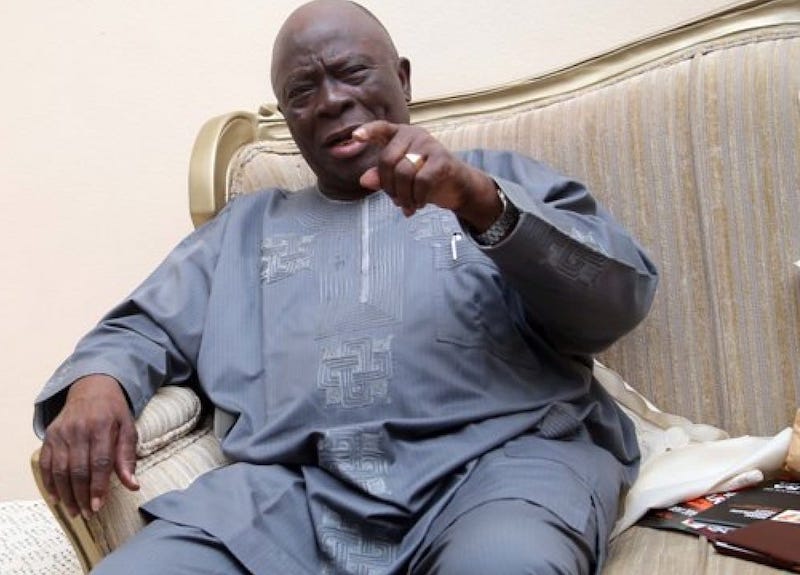 The acting leader of Afenifere, a Pan-Yoruba socio-political group, Chief Ayo Adebanjo, has clarified that the decision to back the presidential aspiration of Mr. Peter Obi of the Labour Party (LP), was in line with ideological and equitable principles of the group.

Adebanjo, gave this clarification yesterday at a press conference at WheatBaker Hotel, Ikoyi, Lagos, in reaction to a statement by the presidential candidate of the All Progressives Congress (APC), Asiwaju Bola Ahmed Tinubu, that Adebanjo has turned Afenifere into his ‘personal estate’ as Acting Leader.

Tinubu had criticised elder statesman over claims that Afenifere had endorsed Obi, insisting that as an individual, Adebanjo could not equate himself with Afenifere.

The Afenifere leader said, the decision to support Obi was in line with that of the defunct Action Group (AG), which upheld strong advocacy for federalism as the best form of government to give the federating units the requisite atmosphere to thrive and peacefully compete among themselves for the ultimate development of the country.

But Adebanjo insisted that Afenifere was known for its social welfarist ideology of the defunct Action Group founded by the late sage, Chief Obafemi Awolowo, noting that backing of Obi, who hails from the South East as the next president of Nigeria, was Afenifere’s modest contribution to shaping Nigeria into a federation, where no person or ethnic nationality is oppressed.

He recalled that Afenifere had insisted and still advocated restructuring in the countdown to the 2023 general election, and long before the parties conducted their conventions to pick their officers and candidates.

Adebanjo argued that it was based on the quest for peace, equity and inclusiveness that a Yoruba and Southerner in the person of Chief Olusegun Obasanjo took the first turn at the zoning arrangement in 1999, became the president, saying the sitting President, Muhammadu Buhari, is a Fulani from North West “and by virtue of the zoning arrangement that has governed Nigeria since 1999, power is supposed to return to the South imminently.

“The South West as I have pointed out has produced a president and currently sits as VP, the South-south has spent a total of six years in the presidency, but the Igbo people of South East have never tasted presidency in Nigeria, and now that the post is due back in the South, equity demands that it be ceded to the Igbo.

“We cannot continue to demand that the Igbo people remain in Nigeria, while we at the same time continue to brutally marginalise and exclude them from the power dynamics. Peter Obi is the person of Igbo extraction that Afenifere has decided to support and back, he is the man we trust to restructure the country back to federalism on the assumption of office.

“We will not compromise this principle of justice, equity and inclusiveness because one of our own, Asiwaju Bola Tinubu is a front-line candidate,” Chief Adebanjo.