Lawmaker Inaugurates Boreholes, Classrooms, Others for Constituent  30 mins ago 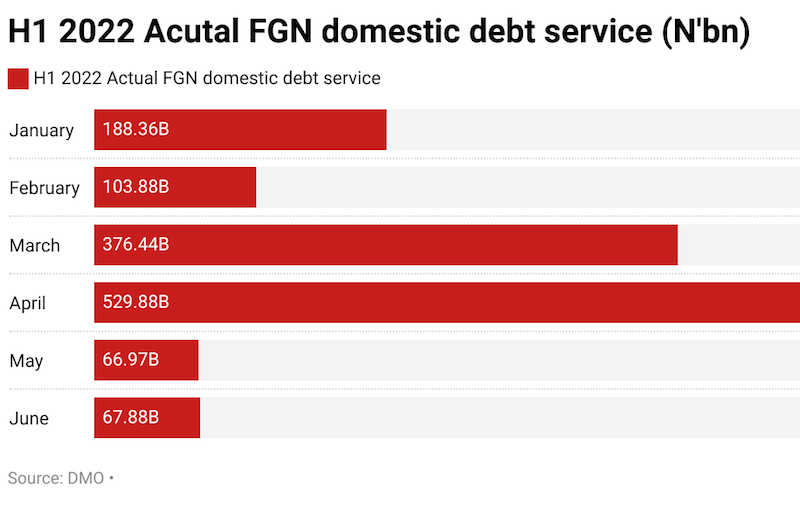 With mounting domestic debt now standing at N20.95trillion as of June 2022, Nigeria’s domestic debt service rose to N5.24trillion in 30 months, data on the Debt Management Office (DMO) website has revealed.

The latest report by DMO revealed that domestic debt service in first quarter of 2022 was at N664.73 billion, representing 0.6 per cent decline from N668.69billion in second quarter of 2022.

Further breakdown revealed that the government domestic debt service was at N2.05trillion in 2021, a 10.8 per cent increase from N1.85trilllion in 2020.

Experts have raised concerns as the federal government continues to obtain new loans from both local and external sources, despite growing debt profile and servicing cost.

The International Monetary Fund (IMF) had predicted that Nigeria’s debt service-to-revenue ratio would jump to 92 per cent in 2022 from 76 per cent in 2021.

Speaking with THISDAY, the CEO, Wyoming Capital & Partners, Mr. Tajudeen Olayinka stated that the debt servicing by the federal government over the years has encouraged investors to provide additional support to the government with respect to further investment in government securities.

According to him, “It presents government in good light, with the opportunity to fund developmental projects across the country.

“The negative aspect of debt servicing in Nigeria is the sustainability problem that has now greeted the current administration of President Muhammadu Buhari, whereby, more than 100per cent of revenue is now being expended on debt servicing, giving room for possible default and failure of government in no distant future, especially with respect to foreign debt component.

“The fact that government spends its entire revenue to service debts, despite introducing new taxes and raising rates in some others, is an indication that economic agents are not generating enough outputs, sufficient to put Nigeria’s economy in the positive territory. It is actually a sign of declining output. It is simply a failure of fiscal policy.”

He hinted that the only way to cut the debt service figure down is for government to shift away from its current public sector dominance, and allow private sector businesses to occupy the driver’s seat, so as to consistently put the economy in the positive territory.

“Government should begin to consider removing subsidies in phases, in a manner that will not add more to the hardship on the ground. It also presents an opportunity to allow the economy to run a normal course of adjustment,” he added.

The CEO, Centre for the Promotion of Private Enterprise (CPPE), Dr Muda Yusuf commenting on raising debt profile noted that, “When we take account of borrowings from the CBN and the stock of AMCON debt, the debt profile would be in excess of N60 trillion.

“Although government tends to argue that the conditions was not a debt problem, but a revenue challenge.  But debt becomes a problem if the revenue base is not strong enough to service the debt sustainably.  It invariably becomes a debt problem and possibly a debt crisis.  Government actual revenue can hardly cover the debt service obligations.

“Which implies that the entire capital budget and the recurrent expenditure may have to be funded from borrowing. This is surely not sustainable.  The finance minister reported recently that in the first four months of this year, debt service to revenue ratio was over 100per cent.”

According to him, “What is needed is the political will to cut expenditure and undertake reforms that could scale down the size of government, reduce governance cost and ease the fiscal burden on the government.

“It is imperative for the country to operate as a true federation which it claims to be.  The unitary character of the country is making it difficult to unlock the economic potentials of the sub nationals.  It is perpetuating the culture of dependence on the federal government.

It is necessary to scale down the size of government and cost of governance.  Fiscal sustainability is driven by both cost and revenue. Therefore, managing the major drivers of cost and revenue is imperative.

“As far as possible, the government should push back in sectors or activity areas where the private sector has the capacity to deliver desired outcomes.   We should see more privatization at all levels of government.

“This would allow for the infusion of more private capital into the infrastructure space. We need to address the fuel subsidy conundrum at some point as it clearly not sustainable.”