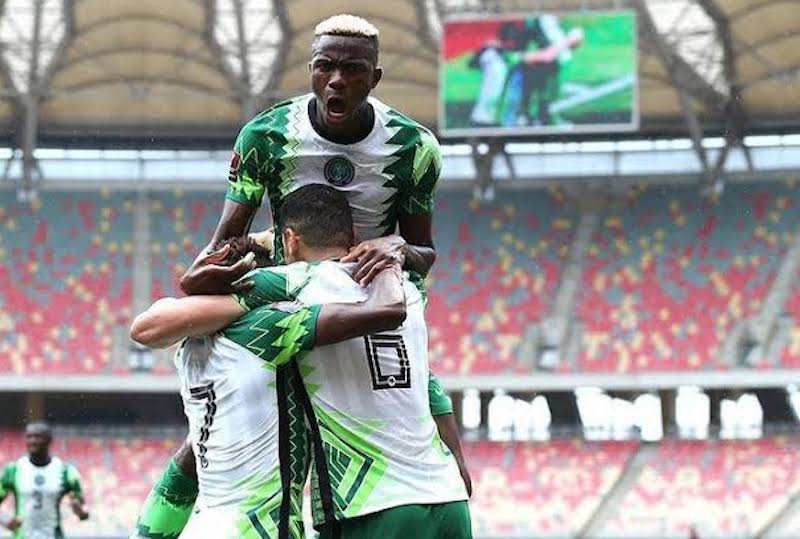 Nigeria’s Super Eagles returned to winning ways on Thursday evening as the three-time African champions laboured to a 2-1 victory over Leone Stars of Sierra Leone in an AFCON 2023  Group A qualifier at the MKO Abiola Stadium in Abuja.

The performance of these Eagles under new Portuguese Head Coach, Jose Peseiro, was far from satisfactory. They appeared rusty and lacked the familiar flair of the senior Nigerian team.

The three points from the game appears only consolation to Nigerian fans who were locked out of the game as punishment for the crowd trouble experienced in the last World Cup playoff with Ghana at the Abuja stadium.

The visitors from Freetown drew the first blood barely 11 minutes into the game when Jonathan Morsay unsettled the hosts with a flying header to give the  Leone Stars the 1-0 lead. It was exact same time that Ghana’s Thomas Partey scored the long range goal that snatched the 2022 World Cup ticket from Nigeria.

The Coach John Keister’s side almost doubled their lead with the same Morsay hitting the base of Francis Uzoho’s goalpost.

However, Everton midfielder, Alex Iwobi, redeemed Nigeria’s pride leveling scores 1-1 in the 16th minute when in a one on one exchange with Moses Simon, drilled to the far corner of goalkeeper Mohamed Kamara’s post.

With the clock ticking three minutes left for the first half break, Napoli Forward, Victor Osimhen streched to loop a right wing cross into the net for Nigeria’s second goal. It came from an Ola Aina cross from the flank headed by Moses Simon into Osimhen’s path.

The second half was almost an even affair but with the visitors making dangerous incursion into Nigeria’s vital area. In the other half of the field,

Leone Stars put up more zeal to curtail the attacking forays of the Super Eagles. As the game dragged into added time, they were even more ferocious, struggling for a possible equaliser.

Joe Aribo, Osimhen and substitute Ademola Lookman all missed chances as Nigeria pushed for another goal, but in added time, it took Aribo’s last-second intervention to deny the Leone Stars.

Nigeria’s Captain, William Troost-Ekong is not likely to feature in Eagles next match next week as he was stretchered off the pitch for a possible groin injury.

To say the least, the playing turf of the MKO Abiola Stadium did not help Super Eagles play as it appears a poor job.

Meanwhile, while Eagles laboured to the 2-1 victory, Guinea Bissau hammered São Tomé and Principe 5-1 to lead the Group A.

The Super Eagles will on Monday in Morocco face Sao Tome and Principe in Agadir, Morocco in Nigeria’s Match-day 2 fixture of the AFCON 2023 qualifiers.

In Lilongwe, without star forward Mohamed Salah, record African champions Egypt were stunned by Ethiopia at the Bingu National Stadium losing 2-0 in their second Group D match of the 2023 TotalEnergies Africa Cup of Nations qualifiers.