In Bauchi, 70-year-old Man, Two Others to Die by Stoning over Homosexuality 3 hours ago 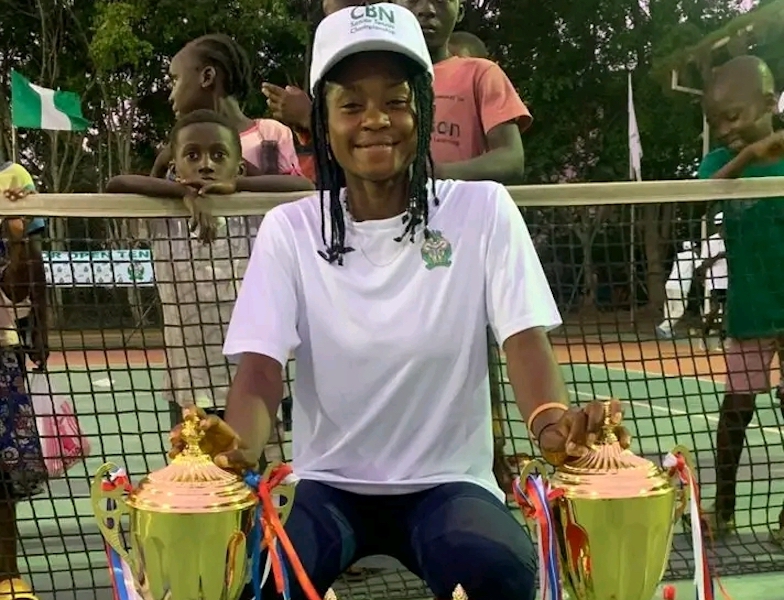 After nearly three hours of fierce exchanges,  fourth seeded Madueke, clinched the championship in the third set after number one seed Henry Atseye retired and conceded the match due to injury with Madueke ahead 2-0 via match points.

Before retiring from the match, power-playing Atseye easily took the first set 6-2 while Madueke took the second 7-6 via an entertaining tie breaker (12-10) that dragged into the night and got the spectators at the centre court of Moshood Abiola National Stadium Abuja, on the tenterhook.

Atseye had come into the game with a lot of confidence after an energy-sapping 4-6, 7-6(6), 6-4 victory against Wilson Igbinovia in the semi-final.

The 18-year-old Igbinovia’s dream of a second championship win within the space of two weeks after winning the second edition of the DavNotch Open was cut short earlier on Saturday.

Madueke, had quite an easy ride to the final as he dismissed unseeded Philip Abayomi 6-0, 6-0 in the other semi-final encounter.

“It was a difficult match, but I knew that as long as I kept on fighting, I was going to scale through.

“We both had to play two consecutive matches today and even though my opponent’s semi-final game was quite tougher than mine, I knew that I couldn’t rest on my oars. I had to keep pushing and stay focused. Thank God I had the victory at last,” Madueke said.

The 17-year-old MaryLove had earlier given sign of what to expect in the final when she outclassed the defending champion and three times winner, Oyinlomo Quadre, 2-6, 6-2, 6-4 in one of the semi-final matches while Aiyegbusi stopped Oiza Yakubu 6-1, 6-1 in the second semis.

The CBN Governor, Godwin Emefiele, was represented at the presentation by Dr Isa Abdulmumini.

In the men’s doubles, Oche Adei paired Igbinovia to win the title by beating the duo of Mathew Abamu and China Michael, 6-3, 6-4..

Alex Adewale beat Wasiu Yusuf, 6-2, 6-7,7-5 to win the men’s singles in the wheelchair tennis category while Kafayat Omisore defeated Oluwakemi Segun, 6-1, 6-2 to win the ladies singles of that category.