Four to Die by Hanging in Ekiti for Robbery, Murder 30 mins ago

Imo Security Situation Has Improved, No Need for Citizens to Carry Arms, Says Uzodinma 1 hour ago

Four to Die by Hanging in Ekiti for Robbery, Murder 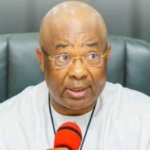 Nine governorship aspirants in the All Progressives Congress (APC) in Katsina State are jostling for the party’s governorship ticket for the 2023 election.

Investigation by THISDAY yesterday revealed that nine gubernatorial aspirants on the platform of the party in the state were able to purchase Expression of Interest and nomination forms and meet the deadline for the submission of completed forms.

Each of the aspirants is waiting for the state Governor, Aminu Masari’s blessings, but the governor, who is a political father to many of the contenders in the party, is keeping his card close to his chest, apparently causing discomfort among the aspirants.

Those who submitted their forms and advanced their reasons they should be given the opportunity to govern the state are the state Deputy Governor, Mannir Yakubu; former Secretary to the State Government (SSG), Mustapha Muhammed Inuwa, and former state Commissioner for Budget and Economic Planning, Faruk Lawal Jobe.

Others who are also soliciting the support of the delegates to clinch the party’s ticket include the former Chief Personal Security Officer (CPSO) to President Muhammadu Buhari, Abdulkarim Dauda Daura; Senator Abubakar Sadiq Yar’Adua, and Umar Abdullahi Tauri Tata.

Consequently, the nine APC aspirants will slug it out at the party’s governorship primary election slated for May 26 if the newly amended timetable of the party is realistic.

Although, where the pendulum of victory will swing is a question of time, however, from all indications, the contest for the soul of Katsina State will be between the APC and Peoples Democratic Party (PDP), as there is no third force in the state yet.