2023 Elections: INEC Receives 216 Requests for Particulars of Candidates  42 mins ago 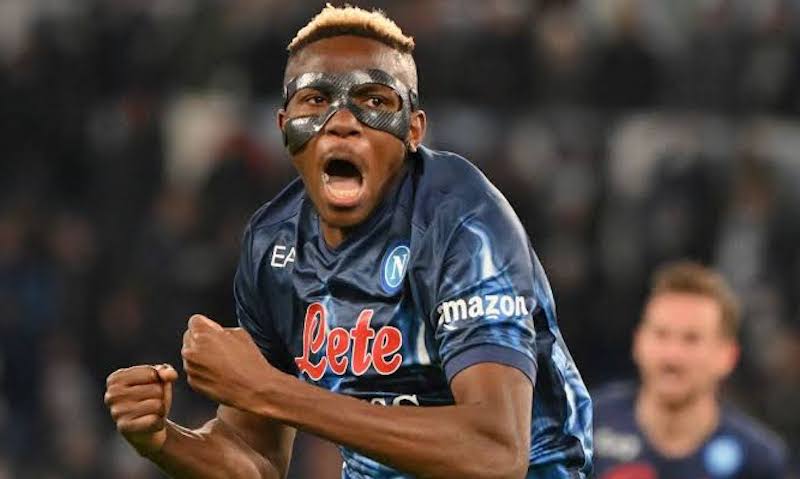 Nigerian forward, Victor Osimhen,  was on target yesterday as Napoli comfortable hammered Genoa 3-0 in their final home game this Serie A season.

The Super Eagles star player has now extended his goals in the Italian topflight  for the season to 14  in 26 matches.

The victory consolidates Napoli’s third place on the log and ticket to play in the Champions League next season.

The 23-year-old opened scoring for Napoli in the 32nd minute before Lorenzo Insigne made it 2-0 on 65 minutes from the penalty spot.

It was the final game at the Stadio Diego Armando Maradona for Insigne, who is heading to Toronto FC as a free agent, and he gave an emotional speech before kick-off.

With nine minutes left Stanislav Lobotka got on the score sheet to make it 3-0 in favour of Napoli.

Sunday’s goal means Osimhen has now scored 18 goals, provided six assists in 31 games in all competitions for Luciano Spalletti’s side.

Elsewhere in Holland, another Nigerian international, Cyriel Dessers took his goal tally for the season to 21 in all competitions, after scoring in Feyenoord’s 2-1 home loss to FC Twente In their final league fixture.

It was Dessers’ ninth goal in 27 league appearances for Feyenoord and has now scored three goals in his last three games.

Dessers pulled a goal back for Feyenoord in the 68th minute, after Twente raced to a 2-0 lead thanks to goals from Dimitrios Limnios and Gijs Smal in the 27th and 37th minutes respectively.