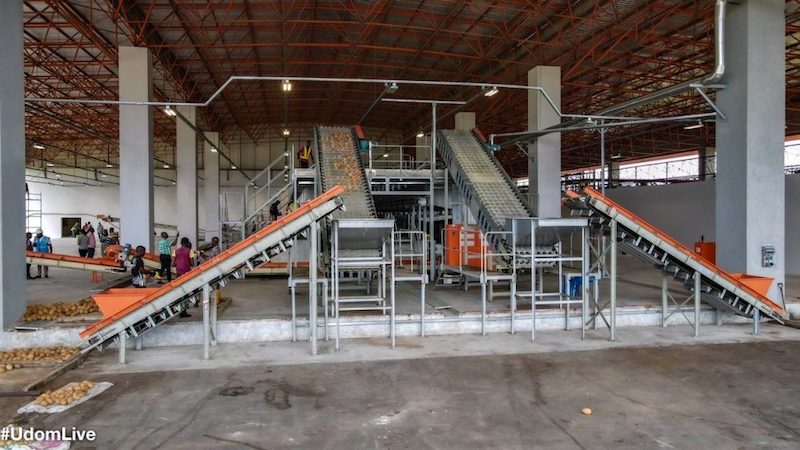 A multi-billion Naira coconut oil refinery, first of its kind in Africa  has been inaugurated in  Akwa Ibom State.

Inaugurating  the project, Suswam, who is the Chairman Udom Emmanuel Campaign  Council for President 2023, noted that Akwa Ibom is ahead of Nigeria in some economic sense.

Suswam advised Governor Udom  Emmanuel to replicate his leadership style and strides across Nigeria when he becomes the President of the country.

Positing that the federal allocation shared in Abuja was not enough to guarantee a prosperous state,  Suswam lauded Governor Emmanuel  for venturing into an area as unique as coconut oil refinery to boost his state’s economy.

“The resources shared in Abuja is not enough. You came, saw Akwa Ibom in a state of despair and left Akwa Ibom a prosperous state.

“What you have done in Akwa Ibom has not been done in Nigeria. You are placing  Akwa Ibom on a global stage. Replicate this in Nigeria when you become President,” he stressed.

Speaking, Governor Emmanuel said the St. Gabriel Coconut Refinery is  first in magnitude and level in Africa, adding that the project came through his desire to open more widows for foreign direct investments.

Governor Emmanuel, who disclosed that a barrel of coconut oil goes for $1,326, said the dwindling crude oil fortunes moved him to explore other economic possibilities, using the available resources.

According to the Governor, coconut oil has become a major economic driver in the international market, adding that the factory will be a major foreign exchange earner, create employment for the teeming youths, and diversify the economy of the state.

The governor, who spoked of plan to commence immediate training of indigenous hands to man the refinery, said the facility has a daily capacity to crack 1,000,000 coconuts  and will employ no fewer than 3,000 direct and indirect staff.  He pledged to plant two million more stands before exciting office in 2023.

“St. Gabriel Coconut Oil Refinery is first of this magnitude and level of seriousness in Africa. Gabriel means God is my strength. We banish barrenness of our productivity, economy, etc. when nobody is bringing money to Nigeria, Akwa Ibom is attracting foreign direct investment.

“Coconut oil goes for $1,326  per barrel. The demand for crude would not be as it used to be, but as a visionary leader, we are prepared for the future even if you take away the crude oil. What we are doing is to turn what God has given to us into money. When I saw coconut everywhere, I thought of turning it to money. it has 365 uses.

Governor Emmanuel said the landmark project, which  is the first of its kind in Africa, is a combination of Asia and European technology built to transfer skills and develop the youths.

“The factory is modern, smart and adaptive to also process palm kernel oil. if we can do this at the sub-national level when we don’t control the policy, only God knows what we would do when we can control the policy.”

Flagged off on May 24, 2017, St. Gabriel Coconut Oil Factory Project, a major industrial investment by the State Government commenced with the cultivation of two -million stands of  hybrid coconut seedlings on an 11- hectare expanse of land.

Other facilities within the complex include water treatment plants, effluent treatment plants and residential quarters for technical and managerial staff as well as parking areas for several raw materials bearing vehicles.