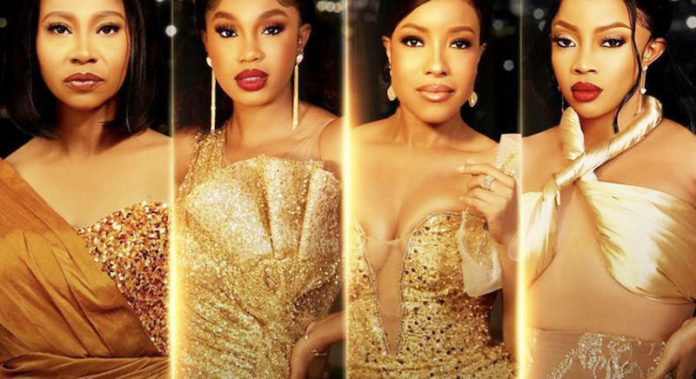 The wait is gradually coming to an end as streaming platform, Netflix released the trailer for its upcoming Nigerian original title, ‘Glamour Girls’, in collaboration with Play Network Studios. The highly anticipated remake of the popular 90s film, has been in the offing since 2019 when Play Network studios first announced that it secured the rights to the classic alongside other blockbuster titles.

The feature film was finally shot last year. The Netflix remake joins the streamer’s impressive list of titles set for this year, which some have started showing. On the new ‘Glamour Girls’, the recent trailer hints of class, and blazes with flashes of glamour, affluence and upscale location, and reveals the cast. ‘Glamour Girls’ remake appears packed with sultry scenes that sure make for the hooks.

First released in 1994 (later Part 2 followed), the original ‘Glamour Girls’ comprised a lineup of some of the biggest Nollywood stars at that time – Liz Benson, Eucharia Anunobi, Jennifer Okere, Ngozi Ezeonu, Ernest Obi, Zack Orji, to mention but a few.

Likewise, this reboot stars Sharon Ooja, Nse Ikpe Etim, Toke Makinwa, Temisan ‘Taymesan’ Emmanuel, Joselyn Dumas, and Segilola Ogidan, among others – all some of the biggest names in the industry now.

The much-awaited movie follows the story of four independent single women who embarked on questionable jobs within Nigeria’s traditionally patriarchal society. The original had quite a number of memorable moments like the steamy Zach Orji bathroom scene with Eucharia Anunobi. The plot centres on a young girl’s quest for a better life which leads her to a questionable lifestyle in a bubbly city of Lagos.

At the time of the film’s initial release it was bashed widely for its nudity and glamorisation of immoral behaviour, but the industry have come a long way from then and now.