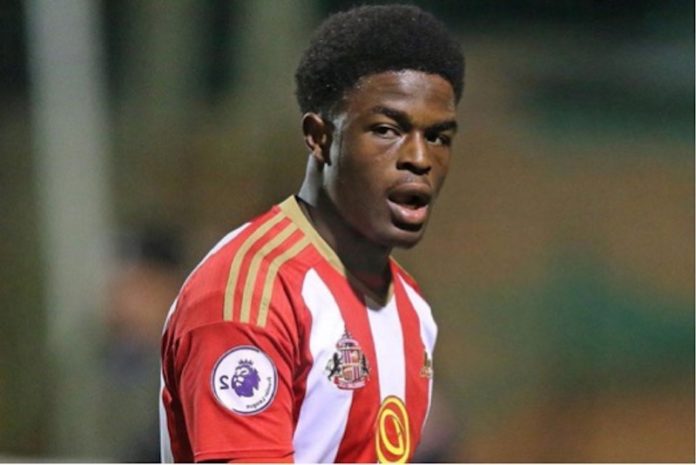 With just 45 minutes of football across four appearances, Josh Maja’s time during his return to Bordeaux after a loan spell at Fulham was everything but a success. The Nigerian moved to Stoke City in an attempt to redeem his career but it was not to be as he fails to impress, leaving him at the mercy of booing home fans and indeed out of reckoning in the national team

Josh Maja’s departure from Wearside mid-way through Sunderland’s first season in the third tier was a controversial episode with the player and his agent often portrayed as the villain.

But it hasn’t worked out for the striker in France though there were some flashes of quality during the loan move to Fulham.

Having scored 11 goals in 48 games for Bordeaux after joining from Sunderland in January 2019, Maja spent the second half of last season on loan with Fulham, where he was unable to prevent them suffering relegation from the Premier League.

Maja then returned to France in the summer, but struggles for fitness and game time saw him feature on just four more occasions for Bordeaux, all of which were late appearances from the bench.

As a result, Maja secured a return to England in the final hours of the January transfer window, completing a move to Stoke on a loan deal until the end of the season but could not find respite.

Maja has been subject to jeering by Stoke City fans culminating in assistant manager, Dean Holden to say, it’s “really important” the supporters “get behind the players” after the Nigerian was booed off the pitch last weekend.

The striker was substituted off the pitch in the 87th minute of the Potters’ 1-0 win over Sheffield United at the bet365 Stadium last Saturday. The change was met with jeers as the player walked to the sideline to be replaced by Steven Fletcher.

Maja endured a frustrating afternoon against the Blades, having just one attempt on goal.

It’s not the first time one of Michael O’Neill’s players has been singled out for ridicule as he’s been subbed off this season, but while Holden says he understands the frustration from some of the fanbase, he stresses that unity is key for the club to keep progressing.

“I think there’s obviously a lot of frustration around for our supporters with the way the season has panned out from where we were going into the January transfer window and where we are now,” the ex-defender said.

“I totally understand that, of course. I think the key thing for us is that we stay together as a group, as players, staff, as a club, with the supporters.

“This place can build some incredible atmospheres. Some pals I’ve got back in Manchester who have come down here over the years say it’s the best place they’ve been for an atmosphere. Obviously, performances on the pitch can help that.

“Of course we’d ask our supporters to encourage our players as much as possible during the game. There are players who have been down a little bit on confidence. Results are usually the reason for that, but now that we’re on the back of a couple of good wins we’re looking forward

“With the supporters behind us, I’m sure there’ll be a good crowd there, there always is supporting us in away games, it’s really important they get behind the players, and they know that as well.”

There is already a big question lingering about what might happen next to Maja. The 23-year-old is due to go back to France next month but where will he play next season? Reports suggest that Birmingham City might resurrect interest in the forward.

Maja had a good record at Sunderland but that was half-a-season in League One, he’d had a bit of a stop-start time in France and had missed the first half of the season with a back injury.

There was hope and excitement because Stoke desperately needed and need a forward who can lead the line and score regularly but that probably came with a world weary dose of realism.

He scored twice in his first three appearances although that probably gave a false impression of what he is about. It seemed like he might be that kind of forward who can have a quiet game but pop up with a goal.

Instead, his best work has been his link-up play. He’s skilful and a good reader of the game outside the box. He works well with players like Romaine Sawyers and has been central to four goals in his last five appearances, three assists and assisting an assist.

He had only had one shot in the seven games prior to the win over QPR, though, let alone score himself.

There was a surreal moment when he pretty much stopped on a counter-attack and stood still as defenders raced past him into position. That didn’t go down too well with fans but Stoke were winning in the closing stages and they’ve had a horrible habit of throwing games away this season – 30 points dropped from winning positions.

Stoke have got an option to turn the loan deal permanent so they’ve at least got first refusal. They could try to negotiate with Bordeaux considering he’s not been prolific and he’ll only have 12 months left on his contract. It doesn’t seem like he’s got any future in France.

The big question for Stoke’s recruitment team as they weigh up his value is whether he can be the striker they can hang their hat on to lead a promotion charge. There probably isn’t a big enough transfer war chest to go for him and another front-line signing.

Manager Michael O’Neill likes him and it’d be a good bet for Stoke to do a deal if the price was right. Maja has said right from the off that he hopes his stay would be long-term.

O’Neill has highlighted a problem with Stoke not being able to work possession quickly enough up the pitch when they have dominated the ball.

“You always need that option to get in behind and it’s something we need to see more of from Josh Maja. There were times against Sheffield United when Maja would have scored goals if he’d read the situation better in the penalty area and taken a chance with his runs, timed his movement and broken free of his marker,” he said.

Maja started his first-team career with Sunderland, where he managed to score 16 goals in 41 league appearances and his display attracted Bordeaux, whom he signed for in January 2019 and went ahead to score 12 goals in 52 appearances.

In August 2019, the then Nigeria manager Gernot Rohr said he wanted Maja to represent the Super Eagles and he finally made his international debut on September 10 in a 2-2 friendly against Ukraine, replacing Victor Osimhen in added time.