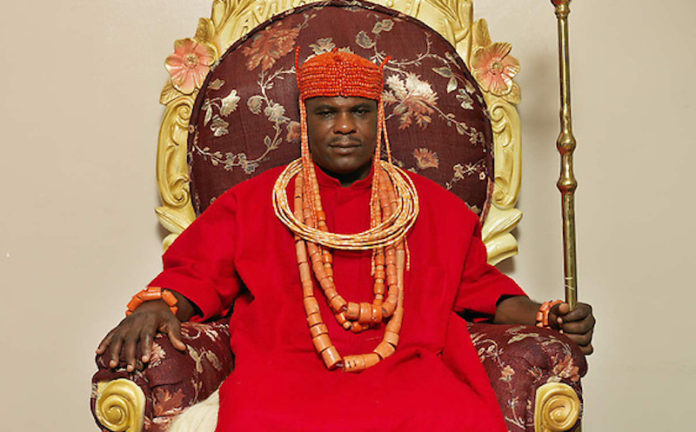 Lack of masterplans and organised building policies are the bane of  development, industrialisation and  tourism in most communities in Delta State, the traditional ruler of Umiaghwa-Abraka Kingdom in Ethiope East Local Government Area, His Royal Majesty, Lucky Ochuko Ararile, has said.

The monarch, therefore, appealed to the Delta State Government to prioritise policies for the proper planning of towns and cities  aside Asaba the state capital, in order  to open up the state for more coordinated industrial and economic development.

Ovie Ararile, who is a retired Air Vice-Marshall (AVM), stated this while speaking with newsmen in his palace at Oria-Abraka on his achievements and challenges in the last 10 years of his coronation. The royal father also unfolded a week-long programme of activities, which kicked off at the weekend, for the celebration of the 10th anniversary.

The activities include: festival dance of traditional hunters, thanksgivings as well as Urhobo food cooking competition with a N1 million prize for the winner attached.

Ararile noted that the state governor, Dr Ifeanyi Okowa, would be leaving behind a worthy legacy if he could formulate policies that would guarantee that all cities, towns, other large settlements and kingdoms across Delta State are planned  and  that such policies  are being adhered to by residents and developers.

While noting that the financial outlay for surveying communities was well beyond reach for individual communities, he stressed the need to urgently arrest the present trend of haphazard land use culture in the state and Nigeria at large.

He said: “In Delta State, apart from Asaba, there is no other city, town, village or settlement that is planned. They are all full of slums. Then, I informed government that it is necessary for the kingdoms to be planned, to set out commercial, industrial and residential areas to avoid building houses in the wrong place.

“However, the response I got was disappointing. As I speak, no real planning is taking place, hence people buy land and put  up structures anywhere. They can even bury their loved ones there, fence it up and walk away. That is because there is no planning. And, without planning there will no meaningful development.”

While appealing to people of the kingdom to continue to make peace their watchword in the peace-loving culture the Umiaghwa-Abraka Kingdom is known for, he said that he was happy that his domain “is today one of the safest in the state.”

The traditional ruler said: “On this occasion, I’ll tell my people that they should maintain peace. There will be no development without peace. It is an essential and necessary condition for development and I urge them to minimize conflicts, which probably could be as a result of the harsh economy of the country, because people are so short-tempered right now; everything results to fight or quarrel. They should cool their temper.We know things are hard. Working together will help us make it.

“Already, this is one if the safest kingdoms in this state. It is not from me. My fellow kings have said so and members of our vigilance group are award-winning. They received awards from the Inspector-General of Police (IG) and we had to send them to Abuja to collect their awards.”

On activities lined up for the celebration, Ararile said: “The category of people that we call Inotu have been in the bush for two weeks hunting animals. They will use the animals to symbolically dance to where the deity is and come back to town for the festivities. In those days, they would have caught live animals and sacrificed them there but they no longer do that. They just symbolically dance with the animals and then take it home to consume later and, once they finish there, the whole town is agog. It is the equivalent of our Christmas here.

“Tomorrow is Prayer Day, so we have prayer and a lecture for the youths to help them identify opportunities that will take them away from fraud, which is common today. Thursday will be the festival and Friday I will give some chieftaincy titles to those who deserve it.

“In this kingdom it is not easy to get a chieftaincy title. We have laid down standards someone should have attained in life before becoming a chief. For example, you must own a house here.

“When you come to Oria particularly, or even Umege, you will see street lights and solar powered street lights. It is part of their own task to provide a certain number. But here we just have a minimum, if you can provide a full street with street light, we will thank you and recognise you. Some of our primary schools are blown up, if you can come and reconstruct one for us, we can consider you. Those people that we are going to confirm will be given their titles on Friday. So, on Saturday, it will be the grand finale. It is a cultural activity. We have been trying to bring back some aspects of our culture that have died.

“We are sponsoring the cooking competition. The price money is about N1 million. In the future, we want to bring some food related companies such as Nestlé and GTBank for sponsorship so that the competition can grow