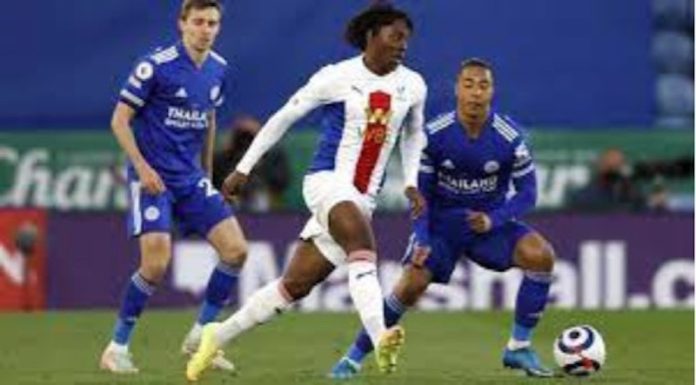 Having started the season on the sidelines courtesy of his Achilles tendon injury suffered during training last May, Eberechi Eze’s return to match action has been slow. Things however changed last weekend for the Nigerian-eligible as he was introduced in the second half in Crystal Palace’s 2-1 loss to Leicester and Coach Patrick Vieira singled out Eze for praise

Crystal Palace manager, Patrick Vieira reveals what pleased him about Eberechi Eze in his club’s loss to Leicester. Vieira was delighted with the contribution of Eze in his side’s 2-1 defeat to Leicester City in a Premier League meeting at the King Power Stadium on Sunday.

Vieira brought on Eze as a replacement for Conor Gallagher in the 58th minute in a tactical substitution to add more firepower to the attack of the Eagles.

Palace looked livelier after the introduction of the Nigeria Football Federation target who won a penalty.

Speaking at the post-match press conference, Vieira praised Eze, saying: “I was really pleased because I think he brought more passes forward.

“He brought a little bit more tempo. That allowed us to create a couple of more situations and chances.”

Eze was left on the bench for five consecutive matches in the Premier League before Sunday’s clash with Leicester City.

Crystal Palace came through March unbeaten, winning three of their four games and earning a point against Premier League leaders Manchester City at Selhurst Park. They now face a busy April packed with six games that will define how Vieira’s first season in south London is remembered.

Although there is little chance that the Eagles will disturb the European qualification places in the league table, they still harbour ambitions of breaking into the top 10. Doing so this year would signal to Steve Parish and co that they made the right choice in appointing Vieira last summer to oversee the next step of the club’s long-term vision. They also remain in the FA Cup and face a London derby at Wembley when they take on Chelsea on Sunday. If they progress to the final, they’ll come up against either Manchester City or Liverpool.

So, with four league games and a semi-final to pack into April, which players will Vieira need to step up and help get Palace into a position where they could realise their ambitions in the Premier League as well as eye up some long-awaited silverware.

Having started the season on the sidelines courtesy of his achilles injury suffered during training last May, Eze’s return to match action has been slow and steady, with Vieria asserting every step of the way that the midfielder would not be rushed back at risk of further injury. That has limited him to just seven Premier League appearances this season, with six of those coming off the bench as a substitute.

It’s in the FA Cup where Eze has had most of his minutes though, starting in the wins over Millwall, Hartlepool United and Everton. In the latter he put in his best showing of the campaign so far, playing a vital role in Jean-Philippe Mateta’s goal in the first and celebrating the moment joyfully on his own in the centre of the pitch afterwards.

“That was his opportunity and I think he did really well,” said Vieira after the match. “He played with a lot of personality. What I was really pleased about his performance is the work that he did out of possession, because we all know what he can do with the ball. So that part of the game he needed to improve, and I think he did it really well. And now that has to be consistent. And the best way to be consistent is to play games.”

If Vieira is true to his word and keeps Eze in the team for Palace’s busy April schedule then he could turn out to be a difference-maker for them, having missed out on his obvious quality for large portions of the campaign so far. He could particularly be useful in the FA Cup semi-final against Chelsea with teammate Conor Gallagher unable to play against his parent club due to FA rules.

Eze has failed to win back a starting place in Vieira’s side after sustaining an achilles tendon injury at the end of last season, which has disrupted his momentum.

Before the injury, Eze had shown plenty of promise, having notched 10 goal contributions (four goals and six assists) in his debut campaign in England’s top flight. However, it’s fair to say that 2021/22 has not gone to plan for player who has made just seven appearances in the current Premier League campaign.

However, Vieira has reaffirmed his desire to keep hold of all of his talented young players and warded off any potential suitors they may have.

The Frenchman is enjoying an impressive debut season in the Premier League as a manager, with the Eagles currently at ninth in the table. Palace boast an impressive roster of young players, all with huge potential who have stood out for them over the course of Vieira’s first year in charge.

Summer signings Marc Guehi (21) and Michael Olise (20) have become fan favourites for their performances while players Vieira inherited Eberechi Eze (23) and Tyrick Mitchell (22) to a talented pool of young talent tied down to long contracts. For Palace fans, there’s a lot to be excited about.

But, as expected, there have already been rumblings of reported interest in several of Palace’s young stars ahead of the summer transfer window. In a pre-match press conference, Vieira was asked whether he would be talking to Palace’s sporting director Dougie Freedman about ensuring his promising group of players stuck together for as long as possible.

“Our main focus is to finish the season well and then we will have time to build or to talk about what we need to improve,” he said. “But we have those young players and the plan is of course for them to stay as long as they can in the football club.”