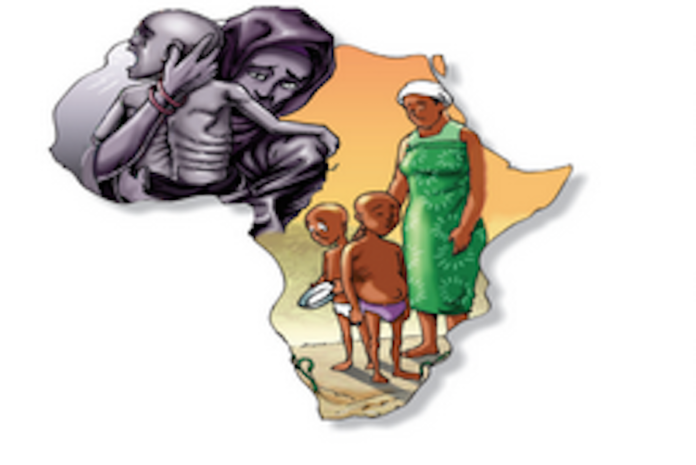 Hunger is a way of life in Africa. The President of African Development Bank (AfDB) Akinwumi Adesina sadly confirmed this when he recently said that about 250 million Africans live on an empty stomach daily. Food systems across the continent, according to Adesina, were failing to deliver diets that are healthy, affordable, secure, and safe for vast swathes of its population. “For many in Africa, persistent food shortages mean that they struggle to put food on the table,” he said.

However, Adesina was not saying anything new. Africa had for long been treading the path of penury and starvation. Despite abundant natural resources and vast arable land, countries on the continent have failed to make investments necessary to provide sustainable and healthy diets for their citizens. According to a 2019 study by the African Union, 56 million children under the age of five years are chronically undernourished, and 13 million are at risk of starvation. A recent report by the Oxford Committee For Famine Relief (OXFAM) said West Africa is currently facing its worst food crisis, with over 27 million people going hungry. According to OXFAM, the number could rise to 38 million by June.

In Nigeria, the problem is exacerbated by the insurgency in the Northeast. Indeed, a recent review of national nutritional reports between 2003 and 2016 indicates that a child nutritional status levels in Nigeria is far below the World Health Organisation (WHO) classification.  According to UNICEF, “Nigeria has the second highest burden of stunted children in the world, with a national prevalence rate of 32 per cent of children under five. An estimated two million children in Nigeria suffer from severe acute malnutrition (SAM), but only two out of every 10 children affected are currently reached with treatment.”

The United Nations Office for the Coordination of Humanitarian Affair further revealed not long ago that more than 8.4 million Nigerians in Adamawa, Borno and Yobe States, three states in the frontlines of the Boko Haram insurgency, need humanitarian aid due to looming food crisis. The organisation noted that the number of acutely malnourished children and women is expected to significantly increase in 2022. “These are anticipated to be the highest levels observed since the emergency period of 2016,” it said. The UN body said that there had been an increase in the number of people in need of food security since October 2021.

Unless the government at all levels, as well as other critical stakeholders take immediate steps to address hunger and malnutrition, especially in children and pregnant women, the poor indices on maternal and child mortality in Nigeria and in deed on the continent, will further worsen. Meanwhile, stunted growth implies a marked increase in the child’s susceptibility to infections and contributes to child mortality. Invariably, pregnant women who are not adequately nourished eventually give birth to babies with low weight, thus putting their survival at risk.

From all the available reports, our governments, at all levels, need to sit up by addressing the crushing indices and causes of malnutrition that have continued to deprive over half of our children (and mothers) of a healthy and productive life span. Food security is critical to realising the objectives of Agenda 2063 to achieve sustainable economic growth and development. As the AfDB boss rightly said, better nutrition in African countries is the foundation to advance health and well-being, educational attainment, prosperity, and equity. Thus, Africa’s leaders must do more to strengthen their commitment to ending hunger in all its forms.