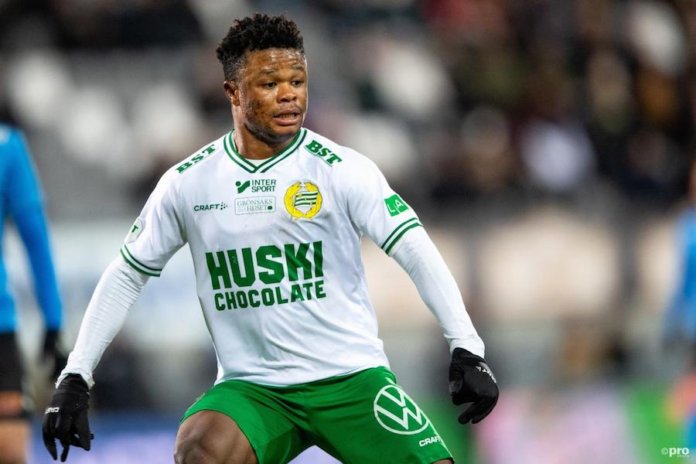 But for CAF’s refusal to allow Nigeria to replace Odion Ighalo after his club refused to release him for the AFCON 2021, Akinkunmi Amoo would have been part of the Super Eagles party to Cameroon. With Rangers not able to guarantee holding on to their jewel, Joe Aribo, the Gers have been linked with the wonder-kid as the Nigerian contingents continues on the rise at Ibrox

Glasgow Rangers already have four Nigerians on their roster, but they are looking to add one more to give them some bite in attack as the Scottish Premiership champions have been linked with a move for Nigerian youngster Akinkunmi Amoo.
The Gers already have four Nigerians on their books- Joe Aribo, Leon Balogun, Calvin Bassey, and Nnamdi Ofoborh, but manager Giovanni Van Bronckhorst wants to add some extra firepower up front.

And a move for Amoo could be in the works. The former Nigeria U-17 star has been excellent for Swedish side Hammarby since he joined in the summer of 2020. The 19-year-old has quick feet and is a good dribbler.

Last season, Amoo was the second best young player in the Allsvenskan. He scored nine goals and assisted five in 29 appearances, helping the Bajen to a fifth-place finish.

According to givemesport, Amoo is one of three targets the Gers are looking to add to the team.

However, Hammarby chief scout has responded to Amoo’s link with Glasgow Rangers saying the speculation linking Amoo with a move to Glasgow Rangers before the close of the January transfer window is incorrect.

The 2019 U-17 World Cup star made a splash in his first full season with Hammarby with a goal involvement of 18 (13 goals, 5 assists) in 36 appearances in domestic matches, and also showed off in the Europa Conference League qualifying rounds.
Amoo’s outstanding form in 2021 saw him nominated for the Allsvenskan Young Player of the Year but he missed out on the award to Malmo’s Veljko Birmancevic.

Interim coach of the Super Eagles Austin Eguavoen namechecked him when talk of the likely replacement for Odion Ighalo in the Super Eagles 2021 Africa Cup of Nations squad came up but Nigeria was refused a late squad change by the Confederation of African Football (CAF).

When contacted to verify claims that Amoo could be joining Rangers, Hammarby chief scout Mikael Hjelmberg said: “There has been no contact with Rangers, I don’t think he’s leaving Hammarby in the January transfer window.”
Amoo’s agent Patrick Mork added: “I have heard nothing from Rangers.”

Sidos FC will benefit from the future sale of Amoo having inserted a sell-on clause into the deal bringing him to Hammarby in June 2020.

The 19-year-old is expected to start pre-season training with Hammarby this week.

When Amoo put pen to paper on a four-year deal with Swedish side Hammarby in June 2020, even though he would have done well to imagine how the next 17 months of his career would go.

The teenager likely anticipated a slow integration into then-head coach Stefan Billborn’s team, but his fast-tracked development under Milos Milojevic has led to a breakout campaign for the winger that has clubs from Europe’s biggest leagues taking notice.

Aided by Alexander Kacaniklic’s departure to six-time Croatian champions Hajduk Split, Amoo has seized his opportunity to assume an important role for the Stockholm outfit.

Over the course of the 2021 season, the teenager has contributed 13 goals and five assists to the Hammarby cause as their campaign enters its final weeks.

How he got here from his formative years growing up in Ibadan, Nigeria, is a fine story.

Despite being a beneficiary of Hammarby’s inclination to snap up young talents and develop them, the determined 19-year-old has not had this opportunity handed to him. Rather, he has had to prove himself.

The timing of his transfer to Europe was doubly complicated due to the pandemic, but any adaption concerns there might not have been shown on the pitch

“I worked hard during the lockdown in Nigeria as it’s not easy playing professional football, so I had to put in the necessary effort,” Amoo said shortly after his arrival in Scandanavia.

“The coaches have welcomed me like a son and I talk to them regularly.”

Having seldom been exposed to competitive football, the fact Amoo has almost seamlessly adapted in Sweden is a credit to the player’s drive and determination.

A product of the Brightville Academy in Ibadan, he left his roots for a move to Sidos FC in Lagos, which in turn opened the door for participation at breakthrough youth tournaments in 2019 – the Africa U-17 Cup of Nations in April and FIFA U-17 World Cup months later.

Even though the Golden Eaglets could not claim either title, a goal in the junior AFCON in Tanzania and a trio of assists at the World Cup in Brazil announced Amoo to a broader audience.

He subsequently said no to overtures from AC Milan and Monaco, instead preferring the Hammarby project and choosing to move to a club that had monitored him for about two years before signing him permanently.

In just a year, the youngster – who fondly remembers his first conversation with Hammarby’s most famous part-owner, Zlatan Ibrahimovic – has fulfilled his ambition of becoming a first-team regular at Bajen.

“It was incredible. I was very impressed and happy. Zlatan is an incredibly great football player that I look up to, but above all a very nice person,” the teenager told SportExpressen in June last year.

“We talked a lot when we met and he gave me advice for the future. It felt like I became even braver after our conversation.

“Zlatan said that I should dare to play my game, stay focused all the time and not be afraid of anyone because then I will develop.”

His desires to win the club’s second Allsvenskan title (a first since 2001), participate in Champions League football and simply play in front of his mother highlight both Amoo’s lofty ambitions and tender years.

“I usually hear that I play like Leo Messi, so I am sometimes called ‘Little Messi’,” he said. “He’s my role model.”