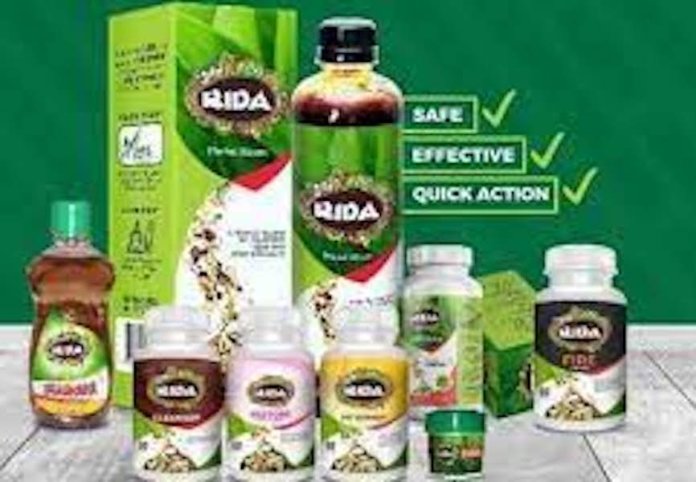 Nigerians have continued to laud the awesome benefits they are deriving from the use of RIDA Herbal Bitters after the Green Mondays, a network of people, committed to ensuring a healthier and wealthier society, carried out its Social Impact Project in some states that saw about 16,000 beneficiaries nationwide receiving RIDA Herbal Bitters for personal use.

Managing Director, Marvel Natural Products, producers of RIDA Bitters, Mrs. Temitope Akinyemi noted that the excitement was palpable as everyone involved who shared how they felt when given the premium herbal product also took advantage of basic medical checks and free counseling.

While reeling out unique contents that stand the product out, Akinyemi said “RIDA is a perfect blend of carefully selected Herb and Root Extracts to help people live healthy daily. RIDA Bitters does the key work of eliminating Oxidative Stress.

“RIDA Bitters contains properties that are effective for general wellbeing and detoxification. It is also very effective in relieving stress and body pains, as well as prevention of malaria and typhoid, high blood pressure, diabetes, arthritis and more.

“RIDA has gone through different levels of testing to ensure that it is made of the highest quality thereby ensuring safety, efficacy, and quick acting. It is NAFDAC approved, US FDA approved, ISO Certified, HALAL Certified, has gone through Pre-Clinical Trials, and most recently, Clinical Trials. To this end, it is listed in the Cochrane Database for Systematic Reviews in South Africa”.

She added that RIDA Herbal Bitters helps to increase the body’s levels of antioxidants and decrease the formation of free radicals, and so helps the body begin to recover and repair whatever damage was earlier done to it, keeping the body healthy, fit and full of life.

According to her, from Lagos to Osogbo through Akure, Sokoto and Port Harcourt, it was fun filled with excitement as people thronged the centres and took advantage of the programme.

Mrs Temitope Balogun and Mr Olaoluwa Akanji Davies from Lagos, could not contain their joy as they shared their testimonies. Balogun, who spoke in Yoruba language, revealed that she suffered from severe chest ache. But upon using RIDA Herbal Bitters, the chest ache disappeared after one week of use.

Also, Davies, stated that he had troubles controlling irregular passage of urine. According to him, his story changed after he started using RIDA Herbal Bitters as recommended.
From Osun State centre came commendation from Mrs Abike Ogunmola who narrated how a friend experienced drastic reduction in the size of her fibroid as well as reduction in associated symptoms like bleeding and pains after some time of using RIDA Herbal Bitters.

In Sokoto, Hajia Safinatu Ibrahim, revealed how she had battled malaria before she was introduced to RIDA Herbal Bitters which ensures her quick recovery.

Similar recommendations came from other centres in Ogun, Oyo, Port Harcourt, Sokoto and Kano States where RIDA Herbal was described as a game changer, a must have by every household and the ideal herbal bitters to eliminate different kinds of diseases and maintain lasting wellness.