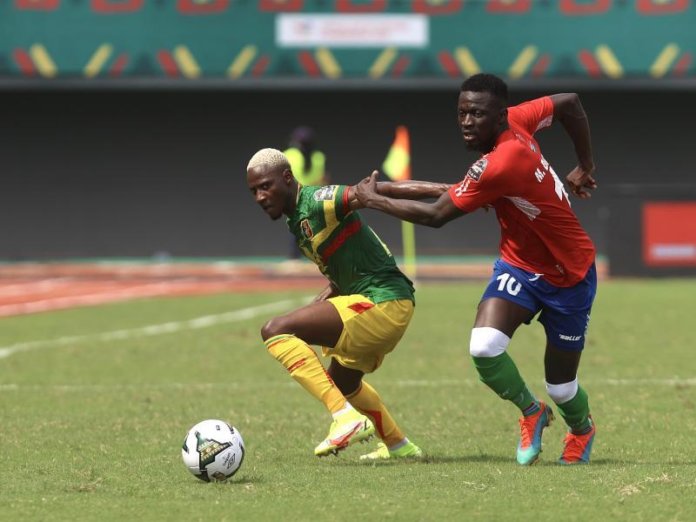 Gambia kept the dream alive after they beat Guinea 1-0 at the Kouekong Stadium yesterday evening to progress to the Africa Cup of Nations quarter-finals.

Musa Barrow was the hero again for Tom Saintfiet’s side as his 71st-minute strike proved to be the difference in Bafoussam.

Both teams finished the round-of-16 encounter with 10 men following the second-half dismissals of Yusupha Njie and Ibrahima Conte.

The possession was equally shared in the first half, although the Scorpions looked far more dangerous on the ball than their opponents.

The National Elephants had the first sniff at goal in the fourth minute though, as Mohamed Bayo latched onto a looping header back into the danger area from Ibrahima Cisse and fired over on the half-volley from the edge of the small box.

Gambia was soon on the attack and Barrow skied a volley from inside the box on the left in the seventh minute after meeting a cross from the right.

Kaba Diawara’s men wasted a good chance to break the deadlock on 11 minutes when Aguibou Camara curled a free-kick over the crossbar from 20 yards out.

Back up the other end Musa Barrow threatened with a venomous long-range strike on the turn that Aly Keita spilled, but the defence was on hand to mop up the danger.

Guinea’s best chance arrived seven minutes before half-time as Bayo found himself through on goal after Pa Jagne was dispossessed. However, Baboucarr Gaye was quickly off his line to smother the ball at the feet of the Clermont forward, whose initial shot was blocked by James Gomez.

Ebrima Darboe came close to opening the scoring on the stroke of half-time with a low shot on the left that went just wide of the far post following good work from Ablie Jallow and Musa Barrow in the build-up.

The National Elephants stepped up their efforts in the second half and Conte failed to keep his glancing header down from a corner on the left in the 50th minute.