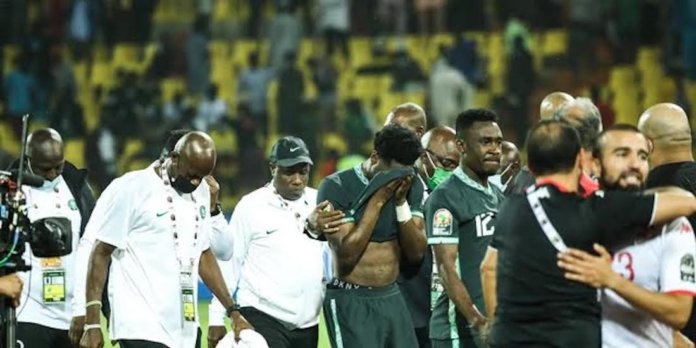 Super Eagles defender, Leon Balogun, has expressed his sadness over the ouster of Nigeria from the 33rd Africa Cup of Nations tournament in Cameroon.

The Glasgow Rangers defender who missed the action in Cameroon due to injury, yesterday lamented the exit of Nigeria to the Carthage Eagles of Tunisia on Sunday by lone goal in Garoua.

Balogun is has just recovered from the injury was part of Nigeria’s final list but has to drop out due to fitness issues.

Balogun through his social media handle praised the players’ performance and called on Nigerians to keep on supporting the team.

” An extremely bitter defeat ends our title aspirations at AFCON2021. That doesn’t change the fact that they’ve been a joy to watch.

“So please, don’t let negativity and bashing of players take over. Instead, keep supporting them as you did before Sunday,” the former Mainz 05 defender stressed.

Balogun is expected to be back when Nigeria face Ghana’s Black Stars in the playoffs round of the Qatar 2022 World Cup qualifiers in March.

The former Everton defender insisted that Iwobi should not have been sent off for his challenge on Youssef Msakni during Nigeria’s 1-0 defeat to Tunisia.

That decision did not go well with Yobo, who stated that it ruined Nigeria’s chances of launching a comeback.

“I went to the assistant referee and I asked him, and he said it was a collision. Fair enough, there was no intent to hurt anybody because it was in the middle of the park,” Yobo told GOAL.com in the mixed zone on a Sunday night.

“We can look at it from different angles, but it was harsh in my own opinion – a yellow card would have been fair.

“We haven’t seen the replay, but the red card changed everything for us. Iwobi is a top player, and he could have added a lot of value to the team,” stressed Yobo who as non playing captain led Nigeria to win AFCON 2013 in South Africa.