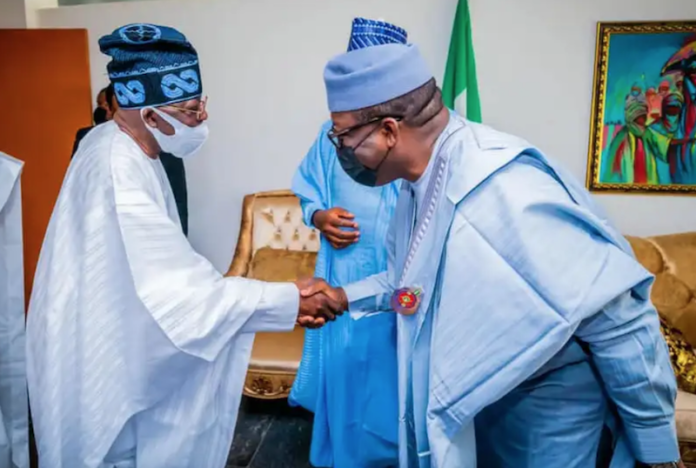 Governor of Ekiti State, Dr Kayode Fayemi, has clarified that his recent meeting with the former Governor of Lagos State, Senator Bola Ahmed Tinubu, offered an avenue to ruminate on the progress of the nation and not about any 2023 presidential ambition.

This is as Oyo State Governor, Mr. Seyi Makinde, yesterday wished Tinubu well in his 2023 presidential ambition, adding that he would want the best for Nigeria.

Fayemi berated those he described as spin doctors, who claimed that he dropped his veiled presidential ambition at the meeting when nothing of such happened.

The two notable leaders had a closed-door meeting where undisclosed issues were discussed, which some had misinterpreted to mean strategy over the 2023 presidency, which the duo was said to be interested in.

But Fayemi, in a statement signed yesterday by his Chief Press Secretary (CPS), Mr Yinka Oyebode, debunked the claim in some quarters that the 2023 presidency formed the crux of his discussion with Tinubu, saying he is free to meet with the APC leader anytime he wishes, being his political leader and tutor.
“It was a family meeting of minds. It is therefore disingenuous of the spin doctors who were nowhere near the venue of the meeting to begin to second guess discussions at the meeting.

“In a democratic setting like ours with so many issues begging for attention, discussions will go on daily among political leaders at various levels. Political leadership plays an indispensable role in foisting great responsibilities on people, thus both formal and informal discourses cannot be wished away.
“Creating a fictional social media frenzy out of such meeting where issues of national discourse are discussed would thus amount to an ill wind that blows no one any good.

“Asiwaju Tinubu is a former two-term governor of Lagos State and national leader of the APC, while Dr Fayemi, also a chieftain of the party, is the governor of Ekiti State and current Chairman of Nigeria Governors’ Forum.

“Meeting between the two leaders, dates as far back as their days in exile, when they were both involved in the struggle to wrest the country away from military jackboots, and has since been a regular occurrence both within and outside the country’s political space. So there should not be any big deal in seeing them meet, except someone has opted to create mischief out of it”.

Fayemi stated that the details of their meeting remain undisclosed, saying that: “Seeing the two of them who are being rumoured as potential presidential aspirants from the South-west together may naturally give way to speculations that the 2023 presidential election could form part of their discussions.

“This may have been further fuelled by the fact that Asiwaju Tinubu said he had informed President Muhammadu Buhari that he would be coveting the presidential seat in 2023. Dr Fayemi on the other hand has yet to give any visible sign in that direction.

“However, both Asiwaju Tinubu’s declared ambition and Fayemi’s undeclared ambition have now been taken up and given verve by some spin doctors, particularly those who believe such could rev up their relevance in the eyes of either of the political leaders.”

Fayemi accused rumour peddlers of surreptitiously scrambling for relevance by weaving, not half-truths, but blatant lies into the Tinubu-Fayemi meeting, saying it signposted Fayemi surrendering his undeclared ambition to Asiwaju Tinubu’s declared one.

“Specifically, they have been dishing out barefaced and unsubstantiated lies that Dr Fayemi at the closed-door meeting ‘debunked the raging rumour of his 2023 presidential ambition and pledged support for the national leader of APC Asiwaju Bola Ahmed Tinubu.”

Fayemi said the story by the spin doctors stands logic in the head and stands not only disclaimed but condemned, saying it must have been sourced from the rumour mill, or as a beer parlour gist. At its best, it is a mere conjecture.

“If and when Dr Fayemi chooses to declare his interest in running for the 2023 presidential ticket, he would not be embarking on an ego trip that would warrant going into the unhealthy contest with Asiwaju Tinubu or anyone else.

“Fayemi sees Tinubu as his leader in politics and reserves respect for him as a national leader of his party. Neither will he run the race to use it to negotiate with anyone. Rather he will run because he is convinced he should do so,” the statement added.
Meanwhile, Oyo State Governor, Makinde, has wished Tinubu, well in his 2023 presidential ambition, but added that he would want the best for Nigeria.

He said this when Tinubu visited him over the demise of a former governor of Oyo State, Otunba Adebayo Alao-Akala, and two prominent traditional rulers – the Soun of Ogbomoso, Oba Jimoh Oyewumi Ajagungbade III, and the Olubadan of Ibadanland, Oba Saliu Akanmu Adetunji, Aje Ogunguniso I.

A statement issued yesterday the Chief Press Secretary to the Oyo State governor, Mr. Taiwo Adisa quoted the governor as saying that the National Leader of APC stood for politics without bitterness.
According to Makinde, politicians may fight, struggle for political positions, but power can only come from God.

Makinde said: “I want to welcome you (Tinubu) to Oyo State. We are really grateful for this visit. This is the year political parties will elect their candidates towards the election that is coming next year. So, what this had demonstrated to us is, you stood for politics without bitterness.

“During this political season, you may have to question yourself on why you need to come to the Government House because people might have another interpretation to it. But you sent a message to me and I was delighted to host you in Ibadan.

“We lost two traditional rulers almost in quick succession. First, it was Soun of Ogbomoso land, and we were planning for the burial when the Olubadan of Ibadanland also joined his ancestors. We were still in the middle of that when former Governor Akala also died. I can see that in Oyo State, we try to take politics out of what we call ‘omoluabi’.

“We may fight, struggle for political positions but we know power can only come from God and He gives it to whomever He will like to give it to at whatever time.

“We really thank you for this visit and want to let you know that we have taken proper notice that you have risen above politics and all that is going around here to come and share with us at this moment that we are grieving. We say thank you.

“Let me also use this opportunity to wish you well in your political quest to govern this nation. We want the best for this country and only the best is good enough at this particular time.”

The statement quoted Tinubu as saying that the reign of the two prominent traditional rulers was peaceful, adding that the duo contributed to the peaceful atmosphere of the state.

Tinubu was also quoted as stating that the late Governor Alao-Akala equally contributed immensely to the political development and the love radiating within the political arena in the state.

“I want to thank you, the governor. It was only last night that I thought of my coming here and we are here today. Having lost a former governor of this state, the Olubadan of Ibadanland and Soun of Ogbomoso, it is just for us to go back to the sense of value of people and their lives
“With this situation, we share in your loss. You, as the governor on the saddle of power, take responsibility for the situation here. I want to say that we thank God Ibadan has been peaceful and not a den of violence but peaceful.

“Every other thing that has happened has taught us in the book of religion that we are just passing through and we will leave one day. But no matter how long, it is difficult to absorb the loss easily.
“Thank you for being accommodating. We gave you a short hour’s notice and you responded.
“That is a demonstration of a good character, which is rare. People get, sometimes, intoxicated with power and the arrogance of office can be overwhelming, but not with you. Thank you for receiving us so quickly.”