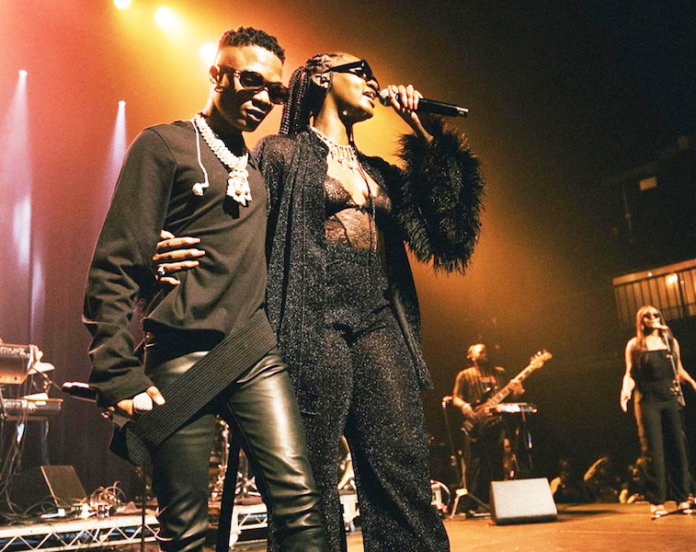 Nigerian singer Wizkid continues to give his fans something to talk and boast about when it comes to his career. On Sunday November 28, 2021, same day he held a second show at the 02 Arena in London, the Grammy award-winning music star, Wizkid and his collaborator Tems, won Best Collaboration at the 2021 Soul Train Awards with “Essence.” The record beat Chris Brown, Doja Cat, H.E.R, Jasmine Sullivan and Yung Bleu featuring Drake to the award.

Just a week ago, the song also got a nomination in the Best Global Music Performance at the 64th Grammy Awards, with his “Made in Lagos” album in the Best Global Music Album. This comes after the song “Essence” got named Song of Summer by veteran OAP, Ebro Darden. The song charted in the top 10 on the Billboard Hot 100. Recall that the superstar artiste, on Tuesday, November 2nd night, bagged five nominations at the 2021 Soul Train Awards. His partner in “Essence,” Tems also bagged four nominations.

Wizkid’s and Tems’ nominations come in the Song of The Year, Video of The Year, The Ashford and Simpson songwriter’s Award and Best Collaboration for the groundbreaking single, “Essence.” Wizkid also got a nomination for Album of The Year, for Made in Lagos, his fourth studio album, while Tems got another nomination for Best New Artiste. It’s been a stellar year for both artistes. Wizkid has coasted with his fourth album while Tems has also featured on a Drake record. The Soul Train Music Awards honours the best in African-American culture music and entertainment.

The afrobeats singer and songwriter had shortly before the Soul Train awards nomination announced his forthcoming album which he said would drop on the final day of his Made in Lagos tour in Montreal, Canada on January 22, 2022. The Ojuelegba crooner also gave the title as “More Love, Less Ego”, while promising his fans and followers that they wouldn’t wait for too long for the album. Just last night, the Starboy headlined the Arise Fashion Week held in Dubai, with Naomi Campbell, a long-term partner of the prestigious fashion show making an appearance alongside other global celebrities.