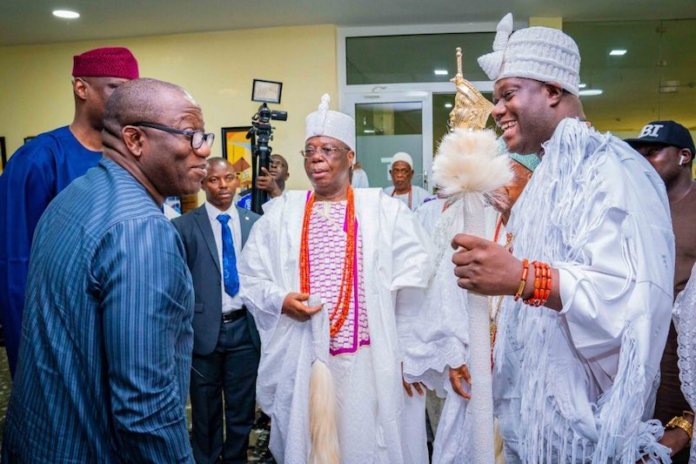 The Governor of Ekiti State, Dr. Kayode Fayemi, has said his government will continue to accord the monarchs utmost respect and allow traditional rulers to make inputs in governance to fast track development and promote culture .

Also, the Ooni of Ife, Oba Adeyeye Enitan Ogunwusi, has said the Yoruba nation could only be accorded recognition in Nigeria if the elites and the political class place high premium on unity and peace.

Fayemi stated this yesterday at the first coronation anniversary of Oore of Moba land, Oba Adekunle Adeagbo in Otun-Ekiti, Moba Local Government Area of Ekiti State. The governor, represented by his deputy, Chief Bisi Egbeyemi, congratulated the monarch for the feat achieved in the last one year in Moba land.

“Let me reiterate my administration’s commitment to accord traditional institutions the rightful place and respect in order to deepen the culture, tradition and values of people across communities in the state.”
In his submission, Ooni reiterated the need for Yoruba people to promote the rich cultural values of the race and not allow civilisation to erode the age-long values bequeathed onto them by the forefathers.

The monarch stated that the zone is critical to the development of the country and could not afford to allow unnecessary crises that could plunge the nation into economic crisis.

The first class monarch explained that Yoruba is blessed with diverse cultural endowment that must be protected and promoted by all and sundry to effect the needed social-economic change in the society.

He emphasised the need for people to work together in unity, noting that Yoruba race can achieve more in the country with unity of purpose and in the atmosphere of peace.

While congratulating the Oore of Otun for the first year on the throne of his forefathers, Ooni expressed optimism that the monarch would attract tremendous development to his domain, “because he is a forthright, dynamic and focus traditional ruler and I have no doubt in my mind about his commitment to development of Moba land.

“There is need for people to promote and accord more respect to our culture in Yoruba land, we have rich cultural values which must not be eroded on the altar of westernisation or civilisation.

“No doubt we must be united as a race, this is very important for our economic development. We need peace in the entire Oodua race because with peace, we can get our rights and get what is due for us in a very peaceful way.”

Ooni, who is the co-chairman of the Nigeria Council of Traditional Rulers, explained the importance of Oore stool to the Oodua race, advised sons and daughters of the kingdom to support and join the monarch in his quest to ensure educational, economic and social development of Moba land.

In his contribution, Oba Adeagbo commended the Ooni for his love to the people of the kingdom, assuring him of his continued support in ensuring unity and peace in the entire Yoruba land.

“All our sons and daughters, home and abroad should come to identify with us in the development of our land, this is the only Jerusalem we have. Let us see to the progress of our land and even the country and most importantly we should be mentors to our children,” the Oore said.