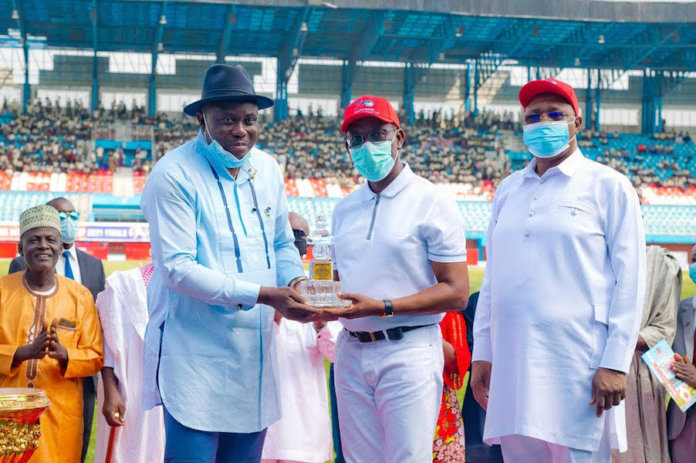 In recognition of his genuine commitment to sports development and industry, Delta State Governor, Senator Ifeanyi Okowa has been honoured with a merit award by the Sports Writers Association of Nigeria (SWAN).

Performing the investiture inside the Stephen Keshi Stadium, Asaba, during the finals of Zenith Bank Delta Principals’ Cup, President of SWAN, Honour Sirawoo described Okowa as an “enabler of generational shift in sports growth and development.”

He stated that Governor Okowa has contributed immensely to sports development, not just in Delta but across the federation.

The nation’s number one sportswriter stressed that under Okowa’s administration, Delta has excelled in every sphere of sports.

According to him, “Governor Okowa must be commended for his genuine love for sports and its development. He is indeed a square peg in a square hole when it comes to passion for sports.

“Under his administration, Delta State has maintained commanding positions in practically all sphere of sports in the country. This clearly shows that the governor is a lover of sports.

“By giving all the needed impetus for sports to thrive, he is at the same time creating opportunities for athletes to earn means of livelihood and contribute to the state’s economy.”

Sir Sirawoo disclosed that the SWAN Merit Award is given to those who truly deserve it and as such, Governor Ifeanyi Okowa has joined an exclusive list of awardees.