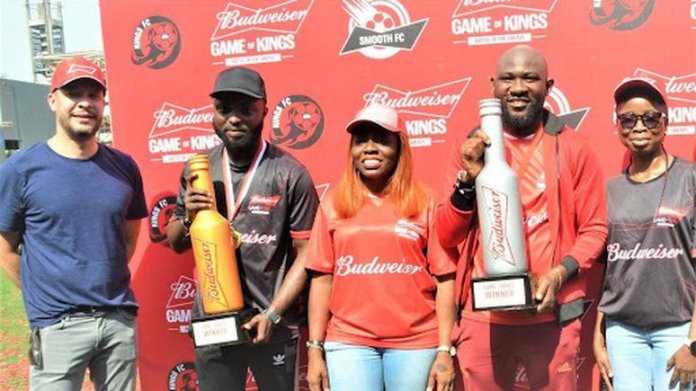 The much-anticipated Budweiser Game of Kings between Kings FC featuring former Chelsea and England skipper, John Terry, and Smooth FC, led by former Real Madrid and Brazil legend, Roberto Carlos, held last Saturday at the Onikan Stadium in Lagos. Tagged, “Battle of the Greats” the high-profile match was preceded by a press conference and dinner to announce and celebrate the arrival of the football legends at the Lagos Continental Hotel in Lagos.

Budweiser had earlier at a press conference revealed plans to have Terry and Carlos in Nigeria to play alongside select players from the Nigerian Professional Football League (NPFL).

Speaking during the press conference, Marketing Director, International Breweries, Tolulope Adedeji said,
“Budweiser recognises football as a unifier of Nigerians all over the world. As a brand that has always supported and promoted the beautiful game, and that’s why we came with Budweiser Game of Kings.”

The absorbing contest saw the duo of Carlos and Terry display some of the skills that set them apart as football greats and gave fans a dose of their signature moves which attracted chants of “JT” and “Carlos” from various parts of the stadium. The match was decided on penalties after ending in a goalless draw at the end of 90 minutes. At the end of the spot-kicks, Smooth FC emerged winners after edging out Kings FC out by four goals to two. Carlos received the trophy as Team Captain of Smooth FC while Terry lifted the trophy on behalf of Kings FC as the Team Captain.