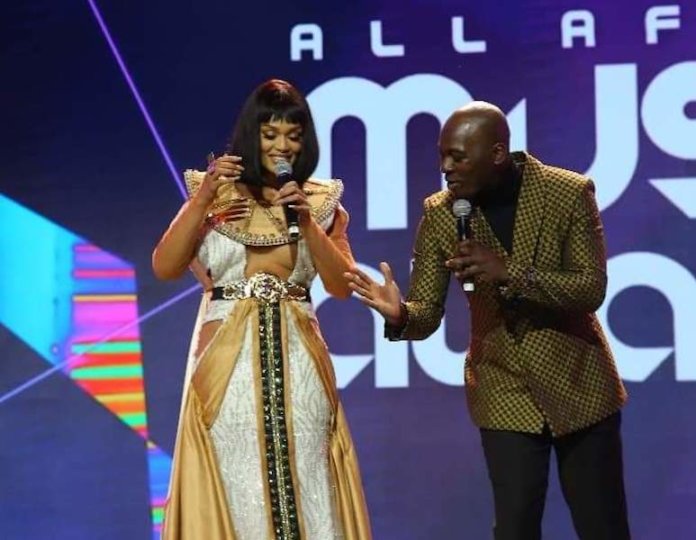 Early this year, the organisers of The All Africa Music Awards (AFRIMA) promised that the drums will beat again following the rollout of vaccinations for the capricious coronavirus which halted most music events last year.

Indeed, the awards kept its word going by the spectacle that bedazzled guests at the Eko Hotels and Suites where the 2021 edition took place. From the long train of the red carpet to the majestic entrance of the hosts, Pearl Thusi and Eddie Kadi who arrived in a sedan chair, to the energetic performances of the night, it was all a show of grandeur for African music stars who flew across deserts and coastlines to the country.

Opening the show with a monologue about the pandemic and the future of Africa, the youngest winner of the night, 13-year-old Kenyan singer Shanah Manjeru described Africa as young and bold like her. The singer took home the award for the Best Female Artiste in African Inspirational Music.

Her monologue segued into a dance performance with every beat matching rhythmically to the movement of the dancers. The dramatic effect of the dancers’ footsteps blended with the revving engine of a car ushered in a pulsating group of dancers dressed in yellow, moving to the energetic sounds from the DJ’s mix.

They easily transited to the performance of Makhadzi from South Africa. The singer got the crowd stunned when she performed a stunt on stage.

Most of the performances for the night were seamless and memorable. For instance, Dizzy Dros from Morocco performance was heart thumping while South Africa’s Nomcebo Zikode got the audience on their feet when he sang the all-time favourite hit ‘Jerusalema’. The beauty of his performance was largely owed to the choreography of the dancers who moved in unison.

Not to be outdone, Nigerian musicians Ruger, Ladipoe, Chike and D’banj brought their own flavour.

While Ruger got the crowd swaying to the pulsating dancehall track ‘Bounce’, it was however his dancers, particularly the males, that stole the show with their sensuous moves. Chike channelled his lover boy persona in the performance of his hit song ‘Running’ but his time was too short to leave a memorable experience.

Performing for the first time at AFRIMA, the Kokomaster D’banj made sure he left a lasting impression. He engaged the crowd with each song and even had three female guests on stage dancing with him. When his excited fans rushed him as he walked into the crowd, he remained unfazed. Rather he stopped the security guards from pushing them back.

As much as he was accommodating, D’banj was conscious of the maturity status of his female fans. He stopped to ask a doting fan who kept hugging him if she was underage. He even teased matured women more in his interaction. Perhaps, to avoid another smear on his name following a rape accusation against him last year?

D’banj no doubt still has that stage craftsmanship that endeared him to fans over a decade ago when he was still with the Mo Hits crew. From his sexual innuendos to his dance moves, the Kokomaster still got his groove. He was however chased away from the stage as the time allotted to him was exhausted and the show had to go on.

Despite the spectacle of the ceremony, it was not without glitches. There were moments when the award presenters appeared confused on what to do and in other instances, nowhere to be found to announce winners. One of such scenarios was when the Breakout Artist of the Year nominees clip was played. There was a brief moment of awkwardness before Kadi came on stage to restore normalcy.

Although this year’s edition was an improved version of previous editions in terms of crowd control, a lot still needs to be done. The organisers can aim to start the show at the scheduled time. The 2021 edition was over an hour behind schedule. By addressing this, they can have a seamless show without unnecessary glitches. Though award ceremonies can be long and oftentimes result in ennui, the organisers can consider giving some of the awards off the live broadcast to save time. This year’s ceremony lasted more than three hours.

One remarkable trait of AFRIMA is its commitment to celebrating African talents. In fact, the music stars from other parts of the continent appreciate the awards more than Nigerian musicians who often consider themselves demigods due to their celebrity status and expect everyone to treat them as such. It was shameful that more than half of Nigerian winners didn’t show up at the event to pick their awards.

However, AFRIMA should not be discouraged by their delusions of grandeur. Rather, they should continue to uplift the music stars from other parts of the continent who value the enormous work they are doing in celebrating the continent’s creative talents and putting the global spotlight on Africa as a nation with huge potential.

As the Founder and Executive Chairman Mike Dada puts it, there is no need to complain or lament about the various challenges facing the continent, rather it is focused on changing the narrative. What better way to do so than to celebrate the rich cultural heritage and creative talents.

It is no wonder then that the Malian Iba One emerged the highest winner of the night, carting away the award for the African Male Artist in Inspirational Music; Artiste, Duo, or Group in African Pop, Best Male Artiste Western Africa, Album of the Year and Song Writer of the Year awards.

Nevertheless, we must celebrate our own Wizkid for following him closely with the Artist of the Year Award, Best Collaboration and Best Song Of The Year for “Essence” with Tems. Other winners include Kofi Olumide who took home the Legendary Award.