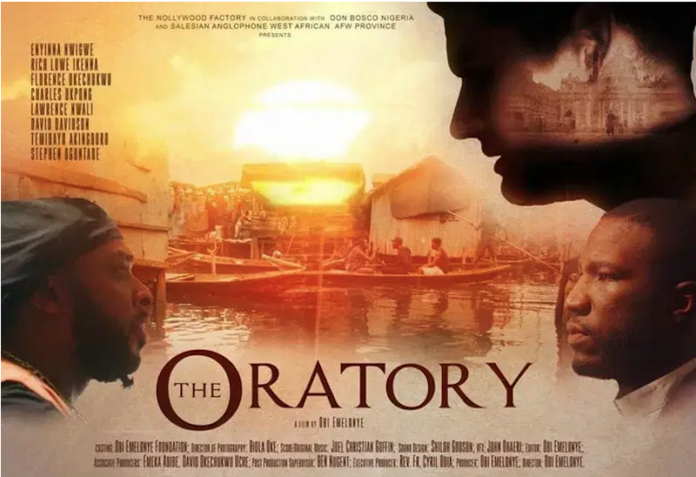 The Oratory, a movie which seeks to raise awareness amongst key stakeholder publics on the plight of homeless and street children in Nigeria is set for the second premiere in Nigeria. This will hold tomorrow Saturday, November 27 2021 at the Genesis Deluxe Cinema, Ceddi Plaza Abuja.

The movie which features both Nigerian and international movie stars was filmed at locations in Rome, Atlanta, Lagos and Turin.

Produced and directed by Obi Emelonye, the internationally acclaimed movie had been screened in Dublin, London, Turin and Venice to rave reviews.

Lagos experienced its first Nigerian premiere last Saturday at the Film House Cinemas in Surulere. At a press briefing held in Lagos, the Chairman, Premiere Organizing Committee, Gbenga Adebija, said the movie is an integral aspect of a multi-dimensional initiative of the Salesians of Don Bosco; to remind the public of their civic responsibilities to street and homeless children and to create “an inclusionary framework for the upliftment of homeless, delinquent and juvenile youths who are at risk of negative societal issues such as violence, sexual abuse, trafficking and crime.”

The Executive Producer of the Movie, Dr. Cyril Odia, who is a Nigerian Salesian priest said the number of out of school children in Nigeria are in millions. “The attempt of this movie is to call for action. As Salesians, we believe in faith in action. It f we don’t multiply that effect and get more partners to come on board, we can foresee that there is going to be disaster. The more young people are increasing on the street, the more the threat of insecurity,’’ he said.

Some of the street children watched the first premiere in Surulere. In his submission, Denise Onoise, a Child Protection Specialist, at United Nation Children’s Fund (UNICEF) said this movie project aligns with the objectives of the international organization.

“At UNICEF, we do partnerships like these even with ministries agencies of government. This is particularly interesting for us due to the work we had done in the past six years. Three years ago, the state governments in the North had been worried about the Almajiris and wanted them to be returned to their states.’’

The movie plot revolves around Rev. Fr, Michael Simmons, an American Catholic priest who is sent from Turin, Italy to Ikoyi, Lagos. Upon his arrival, he becomes concerned about the plight of street children in Makoko. He must do all he can to confront Shuga, the dangerous Makoko Kingpin who has the street boys locked in criminal servitude.