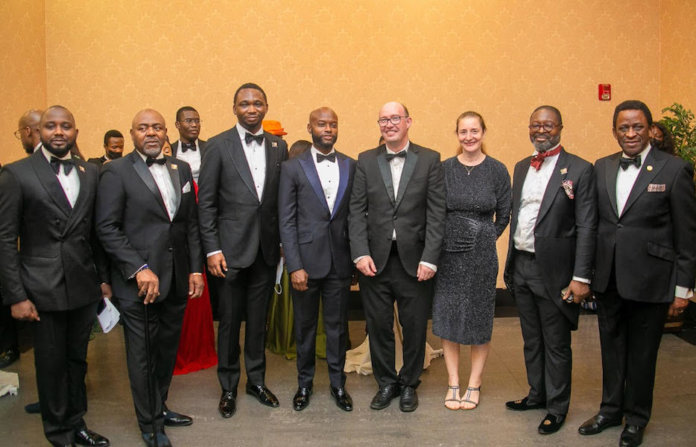 Members of the Oxford and Cambridge Club of Nigeria, the alumni association of the Universities of Oxford and Cambridge in Nigeria, recently held their 2021 May Ball in pomp and pageantry, as part of efforts to keep members engaged and raise funds for students in need of sponsorship for postgraduate degrees at both universities.

The programme held at the Oriental Hotel, Lagos, was graced by the British Deputy High Commissioner, Ben Llewellyn-Jones and his wife, Laura.

In his remarks, the club president, Lanre Fatimilehin, expressed excitement about the meeting after more than two years, adding that the pandemic had brought challenges for the club.

He noted that, earlier in the year, the members had continued the drive to raise funds for students who needed sponsorship for postgraduate degrees at both universities.

A former president, Fubara Anga (SAN), recalled that one of the first people he ran into at Cambridge was former Chief of Staff to President Muhammadu Buhari, Abba Kyari and the late Dr. Bolu Akin-Olugbade, also his classmate at Kings College.

He said Akin-Olugbade was instrumental in the club’s birth.

“All of us here have the tools to be the change that we want to see. We can’t all be depressed, discouraged and dissuaded. We need the courage to confront the challenges we are facing in this country today,” he said.

One of the programme’s sponsors, also founder/CEO of Liquiditti Platforms and Solutions Limited, IK Oragwu, advised the alumni to continue to make an effort to be at the forefront of Nigeria’s business and community development activities as stakeholders for economic and social growth.

Llewellyn-Jones, the guest of honour, said he was proud to be associated with the club.

In Nigeria, the first May Ball was held by the Oxford and Cambridge Club in 1987 at Eko Hotel when the first Chief Justice of the Supreme Court, Sir Adetokunbo Ademola, was the club’s first president.