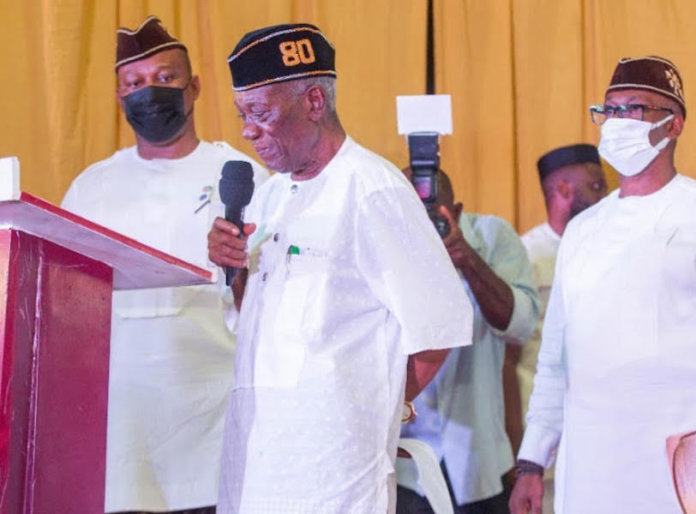 Akwa Ibom State Government has vehemently condemned the rising “elderly-witch” syndrome in the society, where the aged are abandoned and dubbed as witches by the younger generation.

Speaking on Monday at Ibom Hall, in Uyo, the Akwa Ibom State capital, Governor Udom Emmanuel condemned in strong terms the dubious act of some unscrupulous members of the society dubbing the elderly as witches, thereby denying them of the welfare and care they rightly deserve.

“It is disheartening to see some children dub their aged parents as witches. The same parents who took care of them all through their youthful age.”, the governor lamented.

Governor Udom Emmanuel who was the Special Guest of Honour at the Birthday Thanksgiving and books presentation by Mkpisong Ememobong Essien, who celebrated his 80th birthday, wondered why those elderly persons were not witches when they were suffering to cater for the children but suddenly became witches when the children should be catering for them.

Represented by his deputy, Mr. Moses Ekpo, the Governor chided children and youngsters who had failed in their responsibilities of fending for their aged parents and the elderly around them and urged members of the society to take a cue from the children of Mkpisong Ememobong Essien who have proved themselves as role models in the care for their aged parents as demonstrated in the luxurious 80th birthday celebration for their father.

He congratulated Mkpisong Ememobong Essien on his 80th birthday, describing him as one of those strong pillars behind the birth of Akwa Ibom State and the progenitor of the Akwa Ibom Elderly Citizens Assembly, a group that has championed the cause of the elderly in the society.

The celebrator, Mkpisong Ememobong Essien, expressed thanks to God for keeping him alive to see his children and grand children and also exhibited great joy and happiness for the large crowd of friends and people that turned up to celebrate with him as he marks his 80th birthday.

Speaking, one the sons of Mkpisong Ememobong Essien and Commissioner for Information and Strategy, Comrade Ini Ememobong, expressed thanks to God for the life of their father who within his years on earth had been an Evangelist, Preacher, Councillor, Psychologist, Disciplinarian and Mentor to so many.

Comrade Ini Ememobong said, the strict disciplined life of their father made them what they were today.

He extolled his father as he clocked 80 and wished him many fruitful years in good health.

Goodwill messages were presented by some dignitaries at the occasion, including a retired DIG, Udom Ekpoudom, who unveiled and presented the two books of Mkpisong namely: “What About the Aged” and “The Power of Mentorship”, which were reviewed by two scholars including Dr. Aniekan Brown.

The event watched by a cross section of dignitaries, including members of the media community, saw the governor taking out time to present birthday package to the celebrant, sing birthday song to him and cut the birthday cake with him and some dignitaries at the occasion including the sons of the celebrator, Mr. Charles Uwem Ememobong, who set the tone for the Birthday Thanksgiving and Comrade Ini Ememobong