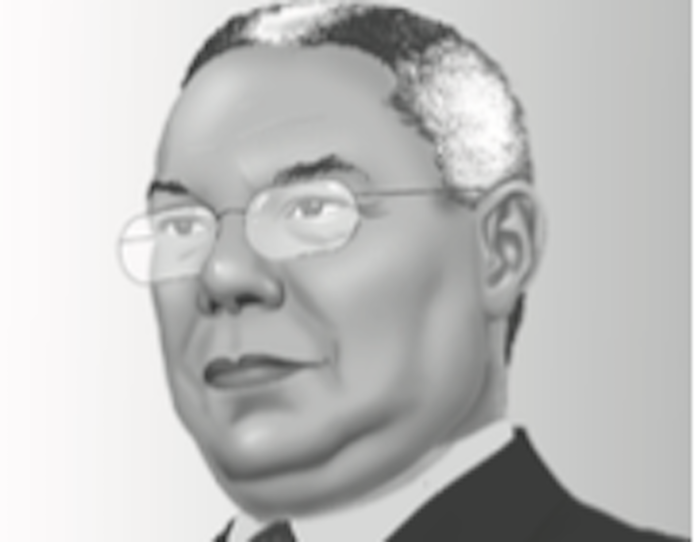 The death last week of America’s revered soldier, politician and elder statesman, Colin Powell has brought into focus the failure of leadership in Nigeria. Each time a world icon passes on, our leaders will be the first to “mourn” and express their sadness over the death without examining what the deceased meant to their country and what irony their crocodile tears is, since they do not subscribe to the values that made the deceased an icon.

I know Nigeria will be a lot better today if we had a few men and women of Colin Powell’s patriotic zeal, competence and moral compass. I have always admired this charismatic leader from his days as Chairman, Joint Chiefs of Staff (1989-1993) and keenly followed his illustrious career path.

I had the rare privilege of meeting the man in person in 2009 in Abuja when he came as Tell Magazine’s Special Guest during the celebration of 10 years of democracy in Nigeria. On that day at the Transcorp Hilton, I asked him what he thought of the future of democracy in Nigeria after several years of military dictatorship. He looked at me solemnly and said “The future of your country depends on the men and women you entrust it. Every system is as good or as bad as the people who operate it. I will advise you to strengthen your electoral and judicial processes and make them independent, as much as possible of political interference. That way, over time you will evolve a political culture that holds all accountable”.

Twelve years after hearing these immortal words of a world acclaimed leader, it is easy for me to see why we have ended up in this dangerous precipice now. Since, we have been unable to entrust our democracy to patriotic, competent and morally sound individuals, we have reaped the fruits of our bad choices.

How did we end up with this large number of people of questionable competence, character and patriotism in our public space? Simple! We have not made our electoral process transparent and independent, capable of throwing up the best amongst us. How come we have not been able to stem the insidious culture of corruption and prebendalism? Simple! It is because, we have been unable to protect the judicial process from political influence and thus ended up with two sets of rules, one for those momentarily in power and the other for the rest of the people.

We will rather distract ourselves from these fatal flaws by searching for new forms of governance that we believe will be a silver bullet to all our problems. Yet we have not dealt with the issue of the capacity to run this new system. A poisoned pipe can never deliver clean water. Our public space is so toxic and citizen unfriendly.

Most political office holders are arrogant, conceited and morally indifferent. Their goal in office is largely acquisition of goods, and power to sustain what have been acquired. Most of these individuals have no other source of income other than the public till, yet they display affluence not commensurate with their legitimate pay. And the law seldom catches up with them.

Colin Powell represents the best of America and humanity. His political career was not without blemish. His assertion that Saddam Hussein possessed weapons of mass destruction which eventually led to the disastrous Iraqi war was a huge blunder. Unlike Nigerian politicians, he had the courage to admit his error instead of engaging in unnecessary revisionism. One wonders why no one has ever taken responsibility for the myriads of policy failures in Nigeria. This culture of responsible-free public space has given rise to impunity and revisionism. His world-view as encapsulated in his belief that “Leadership is solving problems” is a true sign post to countries, organizations and individuals who truly seek to make a difference in their families, communities and country. He once declared that when people stop bringing their problems to you, you have ceased being their leader.

Unfortunately, there is no easy way out of the mess we have collectively created in the name of leadership in Nigeria. Some years ago, I was driving with my two young children in Abuja. I stopped at a traffic light but my kids then about six years old noticed cars honking and driving past and said “Dad, why did we stop when others are driving on”? I said because the traffic light has turned red. And one said “Then why won’t the others stop”? I had no answer to that one. It is so hard to train people to be law-abiding in a lawless environment. No system can function to the benefit of all if it is not anchored on a rule-based environment.

The leadership question in Nigeria is at the core of our problems.

In 1984, General Mohammed Buhari introduced the War Against Indiscipline (WAI). It failed because discipline ought to be inculcated in people by their environment and not by force. Leaders are groomed from birth to seek higher ideals and to pursue dreams bigger than themselves. Our political leaders today are products of a corrupt and broken system seeking self-survival above every other ideal. Such individuals do not have the capacity to be honest, or be prudent in managing public resources. They lack empathy, have no core values or convictions.

How on earth can a system with a majority of such individuals in charge, deliver value? They can only give what they have and what they have is there for all of us to see – hunger, banditry, kidnapping, bloodshed, unemployment, weak institutions and decrepit infrastructure.

What will Colin Powell say of Nigeria today? Probably the same thing he said to me 12 years ago. If we truly want to make a fresh start (and it is never too late) we may have to rethink those immortal words of his, spoken here on our soil, in our capital city – Abuja.

May the memory of Colin Powell be a blessing to all true lovers of a just, equitable and progressive society in Nigeria.

Chief Odom, a legal practitioner, is a former Minister of State (F.C.T)