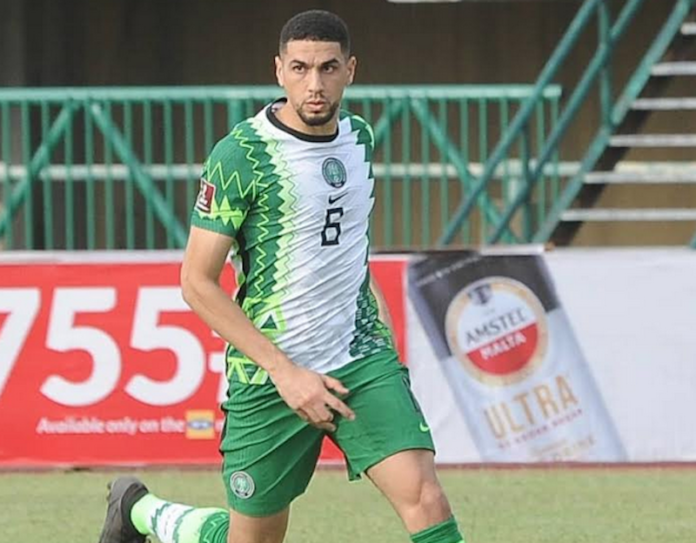 *Says: My first goal in seven years! I have been looking forward so much for it and I am happy it finally came

Scorer of Nigeria’s first goal in the 2-0 defeat of Central African Republic on Sunday in Douala, Cameroon, Leon Balogun, has said he is excited to score his first goal in seven years.

The Glasgow Rangers defender made up for his slip in the first leg that resulted in the Wild Beasts lone goal defeat of the Super Eagles for the first time in a World Cup qualifying match in Lagos in 40 years.

Balogun opened scoring to inspire Nigeria avenge that embarrassment in the 29th minute to steady Eagles’ march to qualifying for the 2022 World Cup in Qatar.

The Rangers central defender popped up at the end of a long, searching ball by Chidozie Awaziem to break the deadlock in Douala, Cameroon last Sunday afternoon.

In the Air Peace flight back to Lagos after the victory in Douala, Balogun admitted that he has for long looked forward to scoring a goal at least in the last seven years.

“My first goal in seven years! I have been looking forward so much for it and I am happy it finally came, and on a day like this,” gushed the lanky half of Nigeria’s ‘Oyinbo Wall.’

The concluding round of matches (Day 5 and 6 games) of the second phase of the Qatar 2022 race are in November.

The Eagles will travel to Monrovia to play Liberia, while Central African Republic fly to Mindelo to tackle the Blue Sharks on Day 5.

On the final day, Nigeria will host Cape Verde in Lagos while Liberia fly to Douala to play Central African Republic.

Nigeria lead Group C on nine points, two above Cape Verde who scored a last minute winner to defeat Liberia 1-0. CAR are on four points with Liberia on three points at the bottom of the standing.