As I was saying… While preparing to write a tribute to mark the passage of the Ozziddism priest that May of 2008, another great man of the arts, the venerable Steve Rhodes also took leave of us – just five days apart. Now that their 23rd anniversaries are here again, the old conundrum rises…but I’ve persuaded myself that while leaders and pretenders run helter skelter over how to govern a resilient and docile nation – until confusion and injustice have now suffocated reason and sense… some of us will go about the business of honouring the dead…while the living-dead deal with Buhari’s brouhahas!

THE END OF OZZIDDISM?
(January 1, 1947 – May 24, 2008)
“I used to prod Sonny Okosuns that all his professional life was programmed to be a consistent adversary to the other great African music genius, Fela Anikulapo Kuti (who died on August 2, also on a Saturday, about 11 years earlier). Irrespective of his protestation, or explanation for his position, I insisted that the fear of Fela was his elixir- the reason for the passion of his musical and public exertions. Well, I had my reasons.

Anyway, the rolling years, patience, maturity, his consistency and unabated passion revealed to me that he probably needed to prove to Nigerians, and indeed the entire world, that you could be the greatest African musical talent without succumbing to irreverence, illegality, agnosticism or rootless ribaldry. To contextualize my proposition, I spread a blanket of inferences…not necessarily in order of occurrence.

When Fela reigned in Kalakuta Republic, at Moshalashi, near Idi-Oro and later, Ikeja; Okosuns threw Ozziddi Palace open to potential delinquents, grooming them out of anti-social tendencies… out of dependency on drugs and vices, with personal and financial sacrifices… to become useful to themselves and their society.

When Fela, the ultimate African big-man, dropped out of monogamy, to transform 27 of his singers and dancers into ‘wives’; Okosuns stuck to Nkechi (even in spite of pressures from his own family to expand his sexual consequence). Of course, the parents later won, and some issues erupted as it is common with most musicians’ doomed struggle to keep their loins from the laps of more than one woman (but that is another story).
When Fela opened his shrine and African traditional spiritism to the world, Okosuns not only dug deeper into his Bible Studies, he later launched a bible-believing church, House of Prayer, in his expansive Lagos home.

When Fela scorned world leaders, lambasting them for foot-dragging on reparations for their heinous exploitation of black Africa, but flirted with revolutionaries and opposition comrades; Okosuns pumped hands with potentates of the free world; and to those with listening ears, he sang his heart out with caressing lyrics appealing for the liberation of the African downtrodden.

Yet, unlike Fela, Okosuns’ music (a miasma of highlife, reggae and folk) was not easy for the succeeding artistes to pick up. Or so it appeared, until he died. It seemed like a personal brand of music chiselled as liberation rhythms. He was indeed a tough act to follow, or copy… if it were not so, devotees would have crept out of the hinterland when he veered into Christian music. Of course, that period in Okosuns’ musicography coincided with when Fela, his alter ego, left or was fading off the scene. It would appear Okosuns had no impetus to project the liberation-turned-salutation rhythms anymore…he delved rather into salvation songs with instant success.

His hit LP, Songs of Praise caught the Church of Nigeria panting with confused exhilaration. Reggae – a hitherto heathen music to Christians – became a grudging acceptable rhythmic vehicle running on the fuel of Okosuns’ sudden intervention.
Progressively, music took less and less of his creative cornucopia… politics (both secular and spiritual) took centre court… lyrical creativity suffered…and Okosuns gradually but valiantly succumbed to the rapid movement of Time and discomfort. He died with a lingering burden… with a merciless disease that had no regard for his simple and kind heart. He died far away in a free country because his country was still held down by another type of slavery…his country was still hungry for another type of liberation. His last song was choked in his devastated lungs…he made his final cry for salvation…but we were too busy to hear…we were too helpless to care…we were too traumatized to sympathize…and the African Soldier died.”

STEVEN BANKOLE RHODES: THE ELDER
(April 8, 1926 – May 29, 2008)
“Whichever mood you met Elder Steve Rhodes, you wouldn’t leave without a searing impression of a significant man of history, a profound archetype of what a wonderful place this country could have been.
Because of his reputation – a stickler for excellence, in all things; very organized in thoughts and deeds, and a perfectionist, even at his advanced age – I spent several months getting to know him, to understand his ethos.

For me, every interaction with an enigma excites and motivates me. I see challenges where the signboards say Danger!or Don’t!. Getting to know ESR (of course that means Elder Steve Rhodes) meant getting to know the Steve Rhodes voices. Now, I’m not referring to the award-winning choral ensemble, but the two integral parts – Gloria and Jeanette, ESR’s big daughters.

By 1993, I was ready. We had set out to organize the most definitive music award ceremony outside the grip of the core practitioners of the craft. We wrote to ESR, inviting him as the chairman of the award’s advisory committee, with powers to reign us in when we went overboard in any area of organisation. When ESR’s name was mooted in-house, the baleful consensus was that since he was at least two generations removed from the oldest one among us, he was going to teach us how to channel our infantile exertions to proper routes, and thus accord him a well-deserved distance from the murky waters of reward palaver.

Much as it seemed similar to the odyssey of the tortoise on its doomed (‘not until I’ve been disgraced’) visitation to its fabled in-laws…we sent in the letter of invitation. We didn’t have to wait long. Less than a week later, a quota-size (A5) grey-coloured ESR-headed note arrived – accepting with unveiled humility to serve in the Advisory Board of Fame Music Awards…and enjoining us to divert all efforts at not only promoting, but pursuing excellence in our activities! We flipped. We were stunned. And we convened a summit immediately to discuss the monumental spectacle. The rumbling conclusion was: would any of us at over 70 be willing to serve with contemporaries of one’s grandchild!!? We wondered. An amazing man, indeed.

In 1994, we had another itch: to produce the first all-inclusive movie award ceremony in Nigeria. Thus THEMA (The Movie Awards) was born. No bets in guessing who the guardian angel was. By then, ESR had become the Managing-Trustee of the famed Glover Memorial Hall on Lagos Island. With his status, his deliberate mentoring, we staged the first THEMA (1995) inside the moist entrails of cinematic history – perhaps the oldest cinema hall in the western part of Africa.

Every time I saw him rubbing shoulders and minds with young Turks at entertainment ceremonies, fora and talk-shops. I marveled at the untiring passion of the grandmaster to fuse a spirit of excellence, commitment, devotion, diligence in the creative process… for posterity.

ESR’s wry smile, as he made his mind known on any issue within his core competence, staggered the imagination and disarmed sensibilities…even if his words dripped with sarcasm or umbrage. You know as a matter of everyday fact that he meant exactly what he said – without fear or tear. With a boyish teasing smile, he knocked sense into you with the uncommon authority of a man who had seen it all; a man who could not, even if he wanted, surrender to the indulgence of suffering fools gladly.

Simple to distraction in public style, and blindingly adorable with his beatific smile, ESR had a larger-than-life capacity to motivate and agitate at once. Surely, he will continue to resonate with many generations after him. He is the quintessential ESR. 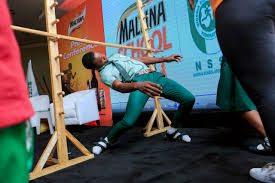