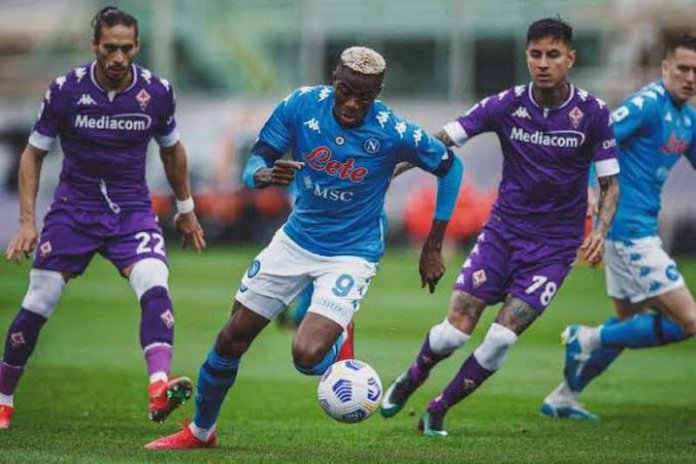 Super Eagles forward, Victor Osimhen was in action for 84 minutes yesterday evening as Napoli defeated 10-man Fiorentina 2-0 and move into third place in the Serie A table as they chase a Champions League spot.

The win leaves Gennaro Gattuso’s side on same 76 points with third placed AC Milan who drew goalless with Cagliari in the last game of the Sunday evening in the Italian Serie A.

Juventus who are just one point below Napoli are fifth. Inter on 88th points are leading the pack with Atalanta second on 78points.

Napoli will be guaranteed a place in next season’s Champions League if they win their final game of the season at home to Hellas Verona next Sunday.

Juve had beaten champions Inter Milan on Saturday to move above Napoli, who therefore travelled to Florence needing a victory to ensure they would go into the final round of fixtures in one of the four Champions League qualifying positions.

Napoli were frustrated by the 13th-placed hosts in the first half as goalkeeper Pietro Terracciano kept out Piotr Zielinski’s strike and Insigne’s free kick rattled the bar, while Fiorentina striker Dusan Vlahovic had a header ruled out for offside.

The breakthrough came after 57 minutes when Napoli were awarded a penalty for a shirt pull at a corner following a VAR review, and Viola substitute Bartlomiej Dragowski was shown a straight red card for protesting the decision.

Captain Insigne’s tame spot kick was saved but he fired home the rebound, and the Italy winger was close to a second when denied by the woodwork again with a low shot that struck the post.

Napoli doubled their advantage in the 67th minute when Insigne laid off a pass to Zielinski, whose first-time strike took a big deflection off Lorenzo Venuti on its way in and was awarded as an own goal to wrap up the points.

Later on Sunday, Benevento conceded a gut-wrenching stoppage time equaliser against 10-man Crotone at the Stadio Vigorito in a 1-1 draw that left Filippo Inzaghi’s side perilously close to relegation and secured Cagliari’s safety.

Gianluca Lapadula’s strike put the hosts in front before Crotone’s Vladimir Golemic was sent off, but Simy levelled from close range in the 93rd minute.

Benevento have 32 points, three behind 17th-placed Torino, who have a game in hand. Cagliari in 16th are now safe with 37 points.

To stay up, Benevento need Torino to lose their game in hand at Lazio on Tuesday and then to win the head-to-head meeting between the two relegation rivals on the final day of the season in Turin next Sunday.

Elsewhere, a late Fabio Quagliarella penalty earned ninth-placed Sampdoria a 1-0 win at Udinese, who are 12th.