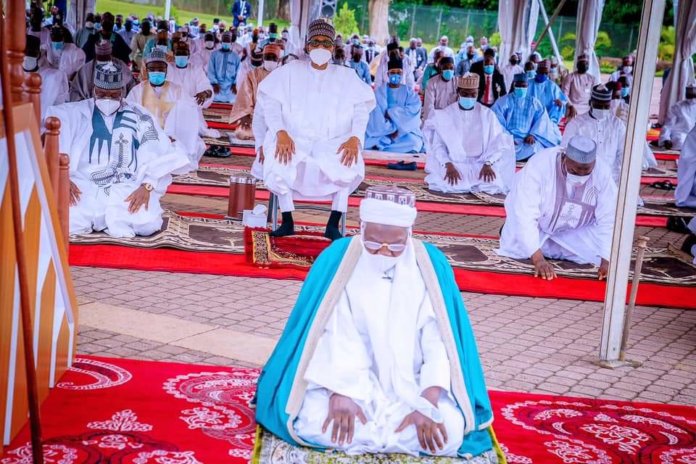 Okowa, in a statement yesterday by his Chief Press Secretary, Mr. Olisa Ifeajika, in Asaba, the state capital, urged Muslims and Christians to intensify prayers to complement federal and states’ governments’ efforts at ending insecurity.
He charged Nigerians to also pray for peace for the nation and to avert a possible third wave of COVID-19 pandemic.

He urged Muslims to extend the spiritual benefits of Ramadan, which were love, peace and justice, to their daily living “as through this, they will be contributing to the development of the nation.”
Tambuwal also felicitated with Nigerians and urged them to pray against insecurity and COVID-19 pandemic.
The governor, in a broadcast yesterday, thanked the people of the state for their continued prayers and support for his administration.

He said: “Allow me to use this opportunity to thank you all for your continuous support and cooperation in running the affairs of our dear state. Suffice it to say that it had been challenging to all of us and the world at large as we battle with the COVID-19 pandemic and its concomitant problems that affected the world economy. We remain ever grateful to Allah (SWT) for his innumerable favours and pray that all those who lost their lives have attained the position of martyrs.”

He added that the nation is passing through challenges such as insecurity and economic hardship and enjoined them to pray for the country.
Also, el-Rufai praised the spirit of sacrifice and resilience displayed by Muslims in Kaduna State during the fasting period.

In an Eid-el-Fitr message, the governor congratulated Muslims on the successful completion of Ramadan and prayed that “Allah will bless the immense sacrifices that are being made.’’
The governor, in a statement by his Special Adviser on Media and Communication, Mr. Muyiwa Adekeye, urged Muslims to keep hope alive and to celebrate Eid el-Fitr in compliance with public health guidelines prescribed to protect everyone from COVID-19.’’

The statement appealed to all communities in Kaduna State to uphold peace and harmony.
In his message, AbdulRazaq called for tolerance, mutual love and understanding among Nigerians to ensure peaceful co-existence and development.

The governor, during an interaction with reporters in Ilorin shortly after Eid-el-Fitr prayers, said: “Nigeria is our fatherland. It is the only country we can call our own.
“On this day and always, I join patriots to rally our people behind the singular agenda of mutual love, peace, unity and harmony”.

The governor emphasised the need for the citizens to embrace one another for peace to reign in the state and the country.