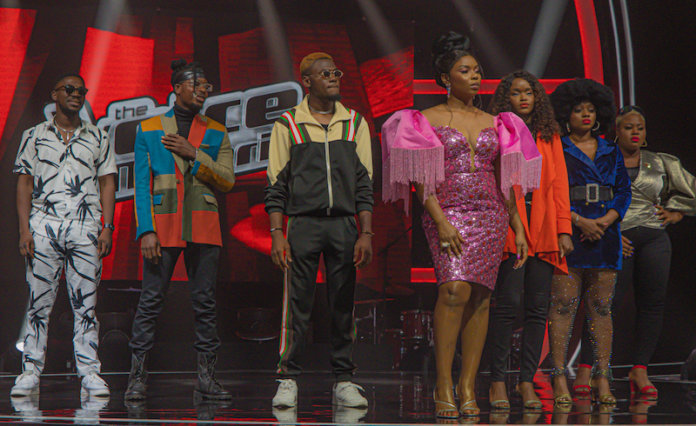 The Knockouts stage of the third season of The Voice Nigeria kicked off last week with Yemi Alade talents. The singer did not only launch the next stage of the music competition but also dazzled with her looks which dominated conversations on social media platforms. From the make-up to the costume, Yemi looked ravishing as she guided her team members on their vocal strength.

The artists performed individually in front of the coaches and other team members with the hopes of getting a vote from their coaches or a steal from other coaches.

For her team — Vanilla, Loven, Ewaoluwa, Toeseen, Tim Ayo and Kitay — only three advanced to the Battles. Vanilla, also known as the powerhouse of the team, was the first to clinch a spot in the Battles after performing Sia’s ‘Titanium’. She would later be joined by Kitay, the last performer of the night.

Toeseen’s rendition of ‘What Now’ by Rihanna opened the show but didn’t save her from going to the Danger Zone, a place where artists with low-performance rate are sent before finally knowing their fates. However, she would later be saved by Yemi, leaving Loven, Ewaoluwa and Tim Ayo as the only talents who didn’t make it.

Tomorrow’s episode airing on Africa Magic channels on DStv and GOtv, will see Team Falz knock it out on The Voice Nigeria stage. Fans can also catch up on episodes on Sunday on AIT, Wazobia TV and Wazobia Max, and Views Channel as well as The Voice Nigeria YouTube channel.

Beyond the wow moments on TV, First Bank Nigeria is also creating exciting moments for fans on their social media pages with First Bank Moments. Fans are asked trivia questions and if answered correctly are rewarded. For instance, for last week’s episode, fans were asked the song Vanilla performed. The bank said it is committed to investing in music talents in the country and The Voice Nigeria is one of its ways it is fulfilling that pledge.

Actress and art promoter Bikiya Graham-Douglas believes that couples battling with conception will easily connect with her character in the new Africa Magic TV drama series ‘Baby Drama’. Graham-Douglas played Esosa Essien, a woman who has been trying to conceive since being married for seven years. She and her husband (Oscar Essien) have had their hopes dashed after trying everything from IVF to alternative medicine.

“Trying for a child in marriage is very difficult for the couple,” she said in a brief chat. “I have had people very close to me struggle with this, and it takes a toll on them and their relationships. I believe couples will connect with ‘Baby Drama’ and Esosa as she is telling their story. They will understand her desperation and will also empathize with her. Hopefully, our society can be more supportive of families struggling with conception.”

The romantic drama series centres on the lives of five women – Iye, Kese, Amara, Esosa and Oni – from different walks of life, as they deal with the reality of how a baby or lack of one will affect their futures forever.

Known for her roles in movies, plays, and TV shows such as ‘Battleground’ and ‘Shuga’, Graham-Douglas revealed that the most interesting thing about her character ‘is that she is full of surprises and will do things you don’t see her doing. She is also a very compassionate woman, not a pushover. I can relate to her qualities.”

Who Will be Saved on Nigerian Idol this Weekend?

After weeks of intense competition, the top 11 contestants finally had their first live performance last week. They were selected from a pool of 3,000 hopefuls who auditioned for the singing reality competition.

With the theme ‘African Legends’, the contestants showed their vocal prowess on stage to get a vote from the audience who will now determine their fates. From Akunna’s rendition of Angelique Kidjo’s ‘Wombo Lombo’ to Beyonce’s performance of ‘Agolo’ by Kidjo too.

This week’s episode will reveal who has been saved or not from the show.

The voting lines closed on Wednesday night. Fans can relive the live performances on DStv Channel 198 and GOtv Channel 29.

editor - June 18, 2021 2:23 am
18
GUEST COLUMNIST BY PAT UTOMI If wisdom were ever desperately needed, that time is now. But reason is embattled and truth often comes with a...