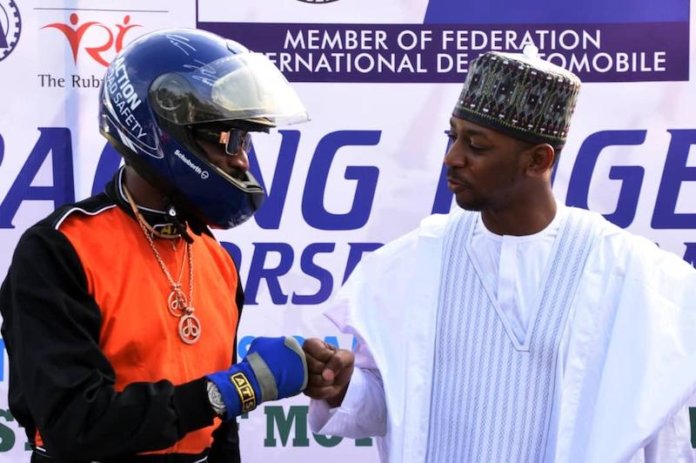 Musical icon Mr Oladapo Daniel Oyebanjo, better known with stage name, D’banj has been appointed the team captain and spokesman for Nigeria to the 2021 FIA Motorsport Games in Marseille, France.

The President of the Automobile and Touring Club of Nigeria (ATCN), Ishaku Bamaiyi, announced the appointment over the weekend at the unveiling of the FIA sanctioned Racing Nigeria Motorsport Games in Abuja.

The unveiling was attended by the Deputy Governor of Zamfara State, Madi Aliyu Gusau and the Director-General National Automotive Design and Development Council (NADDC), Jelani Aliyu.

He also added that his involvement in motorsport would ensure that the sport receives positive vibes, right exposure, funding and required investment.

Bamaiyi said that Dbanj ticked all the requirements set by Federation International de I’Automobile (FIA) as he is a motorsport enthusiast, an icon and a popular figure in the country.

He noted that the inaugural Festival of Motorsport, which holds in Abuja from June 16 to 19 2021, will serve as the qualifying series for the FIA Motorsport Games to give everyone the opportunity to try out his/her skills.

He listed the disciplines that will be competed for at the Festival billed for Baze University and Central Park, Abuja to include Karting (junior and senior), Karting endurance, Karting Slalom, Auto Slalom, Digital Games, Drifting and Rally 2.

According to Bamaiyi, to reinforce its support to the development of motorsport in Nigeria, FIA has appointed Emirates Motorsport Organization (EMSO) as the regional training provider to train Nigerians. He added that the Festival of Motorsport will be the platform to train Nigerians and prepare them for international competitions whether organised by the FIA or affiliate clubs, except where it is for individuals.

In his keynote address, the Deputy Governor of Zamfara State, Aliyu Gusau, described the appointment of D’banj as team captain as merited.

Gusau, a former winner of 2014 Motor Treasure Hunt expressed delight that the aspiration for Nigeria to be represented on the global stage one is coming to fruition.

He expressed optimism that Team Nigeria will do well in international competitions and urged the management of ATCN to partner with the federal government and the corporate world for best outings.

On his part, Aliyu who described racing as a magnificent sport said the unveiling is a milestone for motorsport and the youth of the country.

He challenged the youth to use motorsport to showcase the potential of Nigeria as a country that is relevant on the global stage.