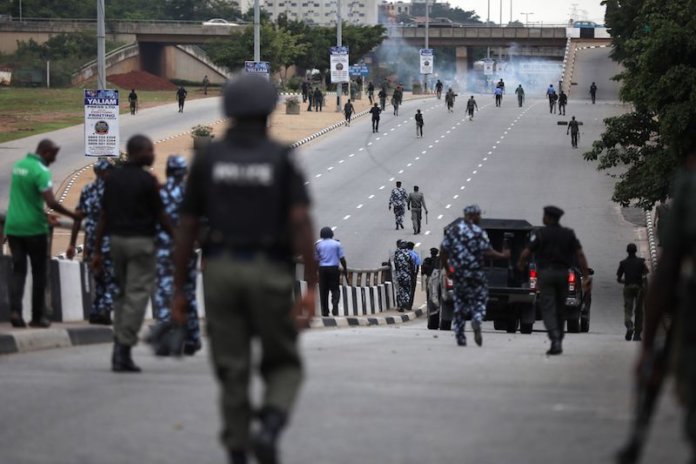 The Federal Capital Territory Police Command said yesterday that one police officer was killed while 49 members of the Islamic Movement of Nigeria were arrested during a protest by the group in Abuja.

The command has also launched an investigation into a viral video depicting some hoodlums looting a demolished site in Kubwa, Abuja.

A statement issued by the Spokesperson of the command, ASP Mariam Yusuf, said members of the sect went on rampage, destroying public property and attacking innocent citizens including police officers using dangerous weapons such as cutlasses, sharp knives, among other dangerous weapons.
“Sadly, one of the police officers, ASP Adama Ezekiel, deployed to restore calm during the violent protest paid the supreme price as a result of the brutal attack where he was stabbed by one of the irate protesters,” it said.

The command said 49 members of the sect were arrested and would be arraigned in court upon conclusion of investigation.

“In view of the above, the Commissioner of Police, CP Bala Ciroma, wishes to commiserate with the family of the deceased officer, who paid the supreme price in service to the nation,” it said.
The command warned that it would not condone further attacks on its personnel, equipment or other public property by members of the proscribed group.

The statement implored residents to remain calm, law-abiding while reaffirming its unwavering commitment to the protection of lives and property within the FCT.
Meanwhile, the command had launched an investigation into a viral video depicting some hoodlums looting the site of a demolished building.

“The attention of the FCT Police Command has been drawn to the viral video of looting in the social media, suggesting that the ‘’Hausas were looting Southerners at Arab Road, Kubwa-Abuja’’.
“On the contrary, preliminary investigation reveals that the Department of Development Control of the Federal Capital Territory earlier conducted a demolition exercise on Thursday 6th May, 2021 at Arab Road, Kubwa, however, some yet to be identified residents seized the opportunity to loot items from the demolition sites”, it said.

The statement said police operatives from Kubwa Division swiftly moved to the scene upon receiving the information to restore calm within the area and arrest the suspects.

“Consequently, the Commissioner of Police, CP Bala Ciroma, has ordered a discreet investigation into the incident and appeals to residents to remain calm and law-abiding.

“The Command implores residents to report all suspicious movements,” it said.