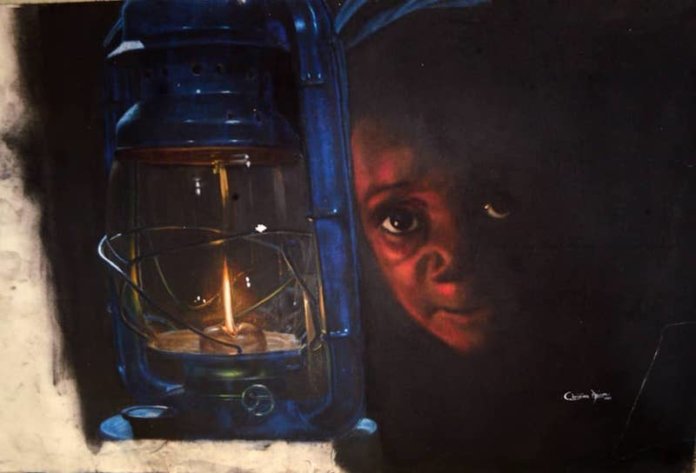 On the heels of steady progression on the Lagos and international art scenes, two artists, Ikechukwu Ezeigwe and Christian Allison are heading towards canvas mastery. They are having a joint art exhibition titled, Transcendence from April 11 to 26 at Thought Pyramid Art Centre, Ikoyi, Lagos. The gallery had previously showcased their works in a juried group exhibition targeted at young talented artists tagged ‘Next of Kin.’ Ikechukwu and Allison had won at the 2019 and 2020 editions respectively and thus, this new show is a way of consolidating their artistic supremacy.

On the one hand, the 32-year old Ezeigwe had one of his works, ‘Enemy of the State’ sold by the renowned Bonhams Private Auction house in the UK. His works are characterized by human figures with animal heads to highlight themes of politics, love, affection, amongst others. He effectively uses his unique painting style to advocate for good and credible governance in his country.

On the other hand, Allison, 30, a native of Bonny Island and a graduate of Obafemi Awolowo University Ile-Ife is an engineer turned full-time studio artist. A hyper-realistic charcoal and pastel artist, his works are also expressed on textured canvas and paper using graphite. Some of his outstanding pieces had been sold in Mexico and the UK. For the ‘Transcendence’ show, each of the artists will be exhibiting 10 works.

The Exhibition Director, Thought Pyramid Art Centre, Mr. Ovie Omatsola, described the art of the two artists as “crazy” styles, capable of keeping the beholder glued to the works. From a curatorial perspective, Omatsola acknowledges their “out-of-the-box” skills, which result in incredible pieces. Undoubtedly, the gallery is commitment to not just discovering future masters, but also helping them to excel.

“The underlying goal of ‘Transcendence’ is breaking the Nigerian curse of not strengthening talents discovered by a project, platform, or organization,” Omatsola who curated the past Next of Kin editions explained. “Next of Kin is focused on discovering, promoting, and supporting emerging talents who are capable of becoming the future masters”.

Omatsola maintained that ‘Transcendence’ is a step further in sustaining and fulfilling the vision of ‘Next of Kin’ which is providing continuous promotion and support for discovered talents. He also predicted that “the exhibition will be a spectacle, presenting gripping artworks of two “highly-in-demand” and fast excelling artists who have grown bigger than what they were prior to winning the Thought Pyramid Next of Kin awards.

Indeed, Ikechukwu Ezeigwe and Christian Allison have become two priceless Nigerian exports who continue to evolve in their particular art specializations.” This is not the first time the two artists would be exhibiting together. In 2018, the two artists exhibited in ‘Tales From Within’ at the National Museum Gallery, Onikan, Lagos.

How VP Osinbajo has won the hearts of royal fathers, politicians, business leaders, and others across Nigeria