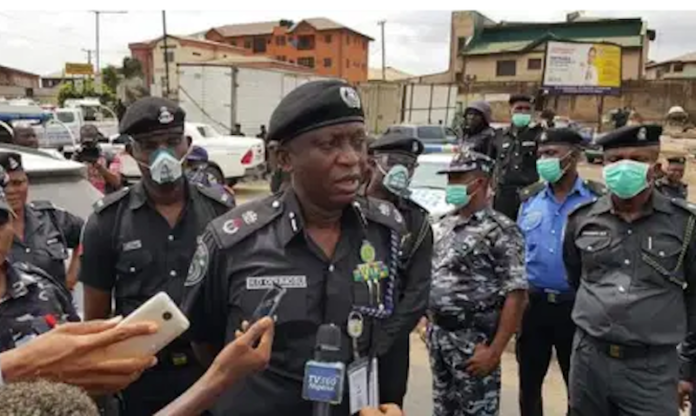 Security has been beefed up in the South-east to forestall further attacks on police formations and correctional centres, THISDAY’s investigation has revealed.

The security alert followed last Monday’s audacious assault on the Imo State Police Command headquarters and the Nigerian Correctional Centre in Owerri by gunmen, during which 1,884 inmates were freed and about 100 vehicles were razed.

Also, the Commissioner for Police, Lagos State Command, Mr. Hakeem Odumosu, yesterday summoned top officers to deliberate and review operational strategies of the command towards forestalling any attacks in the state.
In addition, Odumosu hosted the Controller of Correctional Service Lagos State, Mr. Francis Adebisi, and promised to sustain the deployment of riot policemen in correctional centres in the state.

In Awka, the Anambra State capital, the state police command and Nigeria Correctional Services yesterday blocked all access roads passing through the state police headquarters and the custodial centre to forestall attacks on the facilities.

When THISDAY visited the police headquarters and the custodial centre, stern-looking policemen stood guard, diverting motorists and passers-by to take alternative routes.
There was a long queue of vehicles along the road in Amawbia, where both facilities are located, causing motorists to spend hours in traffic.

Residents of the state were also not allowed to walk on foot through the same road, while motorists have started avoiding the area.
The Public Relations Officer of the Anambra State Command of the NCS, Mr. Francis Ekezie, told THISDAY that the measures were part of the efforts to forestall fresh attacks.

“All the security agencies are on the ground at points you may not easily decipher. Intelligence gathering and strategies are already on the ground. We are leaving no stone unturned to avert external aggression.”
The Public Relations Officer of Anambra State Police Command, Mr. Tochukwu Ikenga, a deputy superintendent of police, said the barricades were to checkmate attacks.

“We just have to ask the people to bear with us for now, but these things are very necessary. You know also that that barricade did not start today, just that we are reinforcing it because of recent events,” he added.
THISDAY also observed that military checkpoints have suddenly appeared in some areas of the state, where soldiers were carrying out “stop-and-search” operations.

These measures have created huge traffic gridlock on many roads in the state.
The Nigerian Correctional Centre in Enugu has also beefed up security.
When THISDAY visited the centre yesterday, at least four soldiers were seen guarding different spots, in addition to the regular officers of the centre.

They were also stopping and questioning pedestrians using the walkway close to the centre.
Public Relations Officer of the centre, Mr. Emeka Monday, told THISDAY that they were working closely with other sister security agencies in the state to forestall any attack that could lead to a jailbreak.

“We have tightened up our surveillance outside the custodial centre and we are doing something entirely different to ensure that the security of the facility is tight,” he stated.
The number of police officers guarding the Enugu State Police Command has also increased when THISDAY visited the command headquarters yesterday.

The officers, armed with their rifles, were patrolling the command while some were stationed at strategic points.
One of the officers was sighted on top of an armoured tank, surveying the environment.
Also, access to the Abia State Police headquarters on Bende Road was yesterday restricted.

Even journalists were not allowed a free pass to the office of the state Police Public Relations Officer (PPRO) as every visitor was required to clear with their host before being allowed in.
At the Correctional Centre in Umuahia, there was also noticeable reinforcement of security around the area.
The spokesman of the State Command of Nigeria Custodial Service, Mr. Linus Ikpe, did not respond to phone calls as at press time.

In Abakaliki, the Ebonyi State capital, security operatives barricaded major streets leading to the state correctional centre.
Business activities in some shops around the centre have also been paralysed as vehicular and human movements have been restricted.
The state executive council has also resolved to set up joint security checkpoints at all the security formations.

The Secretary to the Ebonyi State Government and Coordinating Commissioner, Dr. Kenneth Ugbala, stated that solar lights would be installed at all the police divisions in the state.
The state government has also approved the recruitment of 700 vigilantes in all the local government area of the state.

Meanwhile, the Commissioner for Police, Lagos State Command, Mr. Hakeem Odumosu, yesterday summoned all area commanders, riot police commanders and commanders of the Tactical Operational Units to deliberate and review operational strategies towards forestalling any attacks in the state.

Odumosu also yesterday hosted the Controller of Correctional Service Lagos State, Mr. Francis Adebisi, and promised to sustain the deployment of riot policemen in the facilities in the state.

In a statement yesterday, the state police spokesperson, Mr. Olumuyiwa Adejobi, a chief superintendent of police, said the meeting, held in Ikeja, was also in a bid to be proactive in fortifying security in and around police formations and correctional centres in the state.

“It had in attendance, the Deputy Commissioners of Police, Operations, Administration and State CID, Panti respectively, the 14 Area Commanders, Police Mobile Force Commanders, Commanders of Rapid Response Squad and Taskforce, Commanders of the Special Squad and Strike Team and the State Intelligence Bureau of the command,” he said.

The statement added that Odumosu led the senior police officers to assess and brainstorm on having better security structures in the state and to prevent any attacks on police formations, correctional centres and vulnerable places.

According to the statement, the meeting agreed on many strategies to be adopted, including robust intelligence gathering, surveillance, sectorising the state for easy policing, constant patrol and deployment of personnel to strategic places and multi-agency collaboration amongst others.

“The police boss gave clear directives to the full implementation and enforcement of the strategies emplaced to achieve the goals of effective security of the state generally,” the statement added.
Also, Odumosu, at a meeting with Adebisi, promised to sustain the deployment of riot policemen to the correctional centres in the state.

The PPRO, in the statement, said Odumosu also promised to “partner with the correctional service and other stakeholders to improve on the criminal justice system in Lagos State.”
Adebisi, in his response, commended Odumosu’s efforts at providing adequate security for all and sundry and promoting sustainable synergy amongst security agencies in the state.