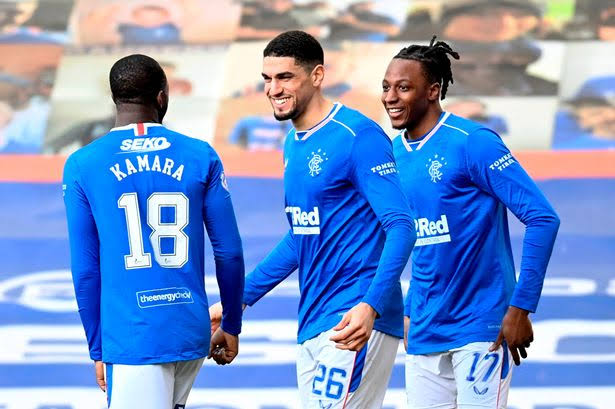 Super Eagles and FC Rangers centre-back, Leon Balogun, has said that he is open to returning to Germany, although he would like to continue his stay with his Scottish Premiership club.

The defender teamed up with the Gers last summer after leaving Wigan Athletic, signing a one-year contract with an option of a one-year extension.

Balogun has spent most of his career in Germany, playing for Turkiyemspor Berlin, Hannover 96, Werder Bremen, Fortuna Dusseldorf, Darmstadt 98 and Mainz 05 before moving to England in 2018 to join Brighton and Hove Albion.

The 32-year-old has stated he would consider returning to Germany, where his family is based, after ending his stay with Rangers.

It’s just a matter of form, I don’t have to worry about that – I definitely want to stay (at Rangers),” Balogun told Bild.

“Germany is my Home. I sacrificed so many moments with my family in order to pursue my career. If there was a chance to get closer to them again, I would listen to it.”

Balogun has been delivering impressive performances for Steven Gerrard’s men, having already featured in 28 appearances across all competitions.

His contributions helped the Ibrox Stadium outfit clinch their 55th Scottish Premiership title and he is delighted with his decision to team up with the club.

“When my advisor called me a year ago, he immediately said: “I have one thing here that is huge for you: the Rangers’,” he continued.

“At first, I thought: Scottish League, well. But then I felt Steven Gerrard’s interest. I don’t mean to say that he chased me. But he really went out of his way to help me.

“I felt that he wanted me as a player, as a guy, as Leon Balogun. He said I was a perfect match for his game idea and the identity of the club. With every word, he convinced me even more.

“The goal was very clear that we had to win the title. Draws felt like defeat to us. You could feel the team’s mentality there.”

“He’s definitely more like Klopp! He is a young coach who you can tell immediately that he played at the highest level himself and he has a very good sense of how to deal with us,” he added.

“Whether someone needs a kick in the ass or whether he has to take someone aside and build him up. He has a lot of empathy.

“He doesn’t need that at all (to get loud when something doesn’t suit him). He hits the right words in every situation and knows how to grab us. That is the art. Every player feels: the coach needs me.

“That is one reason why it will be successful in the long run. He just understands that you have to have your players all on board. And every now and then he lets you glimpse how he was as a player,” the Super Eagles defenders stressed.

Balogun will be expected to continue his consistent performances when Rangers take on Hibernian in a league game on April 11.