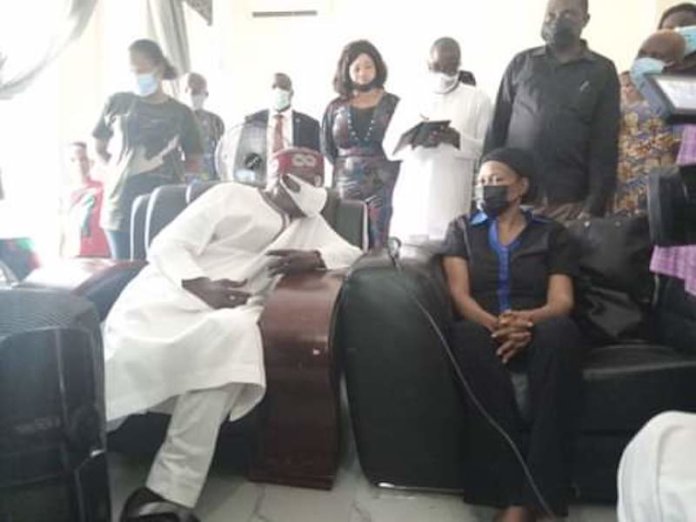 The National Leader of the All Progressives Congress (APC), Senator Bola Tinubu, yesterday paid a condolence visit to the National Leader of Pan-Yoruba socio-cultural group, Afenifere, Chief Ayo Adebanjo, over the death of the spokesman of the group, Mr. Yinka Odumakin.

The former Lagos State governor tweeted that he visited the Afenifere leader yesterday shortly after visiting the wife of the deceased.

“After visiting Dr. Joe Okei-Odumakin, I also paid a condolence visit to Afenifere Leader, Chief Ayo Adebanjo, at his Lekki residence, Lagos to also condole with him on the death of Mr. Yinka Odumakin,” he tweeted

Odumakin, one of the greatest critics of Tinubu, died on Saturday at the Intensive Care Unit of the Lagos State University Teaching Hospital (LASUTH).

Tinubu had in his condolence message described the deceased as a committed fighter for democracy.

He described Odumakin as a dedicated activist, and an outspoken defender of whatever ideals and principles he believed in, and a patriotic citizen in every sense of the word.

According to him, Odumakin was fearless and unrelenting in speaking up in promoting the cause of justice and what he perceived as the best interest of the citizens of Nigeria ever since his student days.

Tinubu noted that the deceased never allowed himself to succumb to tyranny or be pressured into submissive and pliant silence.

He also added that Odumakin was at the vanguard of the battle against the annulment of the June 12, 1993, presidential election