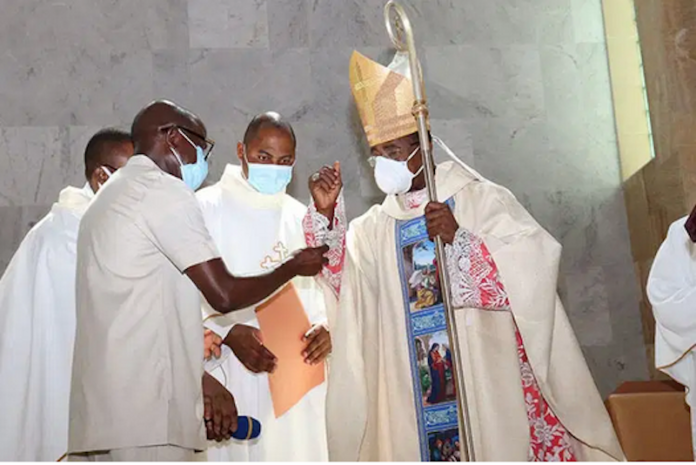 A cross section of politicians in Edo State and beyond yesterday witnessed the donation of a church building by former National Chairman of the All Progressives Congress (APC), Adams Oshiomhole, to his community, Iyamho, in Etsako West Local Government Area of the state.

The state Deputy Governor, Mr. Philip Shaibu, was also at the occasion when the church, St. Joseph Catholic, Iyamho, was donated.

The ceremony also had in attendance, the Minister of Trade and Investment, Otunba Niyi Adebayo, and the Minister of State for Budget and National Planning, Prince Clem Agba.

During the dedication of the church and its Canonical Erection as a parish by the Catholic Bishop of Auchi, Most Rev. Gabriel Dunia, Oshiomhole said he got the inspiration for the design of the church while he was looking for sponsors for the state-owned Edo University “whose academic activities would not be truncated by strikes and unstable academic calendar.”

The former Edo State governor said: “I wanted a faith-based organisation particularly the Catholic Church to manage the university. I had the opportunity of visiting the Loyola College in Abuja and some Loyola universities in the United States, the Jesuit headquarters in New York, and we had a conversation, and I realised the amount of time it will take to be able to commence the project. I wanted the university to take off before the end of my tenure.

“After conversation, my daughter took me to the Jesuit Church within the premises of that university. From outside, just like what we have here, it looked this way but when you get inside the church, it is a fine design of plank, and the administrator explained to us that they used plank to ensure that you don’t have to paint it every six months.

So I am extremely humbled that I did not drop this idea at the airport like many of us do.”

In his homily, Catholic Bishop of Auchi Diocese, Dunia, commended Oshiomhole and his late wife, Clara, for their support for the Catholic Church.

The cleric said: “We were thinking of building a parish in their compound but Oshiomhole’s wife died, and we thought that that was the end but I was surprised that he said the building would commence but not inside their compound.”

The church building also houses Clara Oshiomhole Multi-Purpose Hall, which was launched by the National Chairman of the APC, Mai Mala Buni, who was represented by former Minister of Labour and Productivity, Professor Stephen Ocheni, after making a donation of N10million.