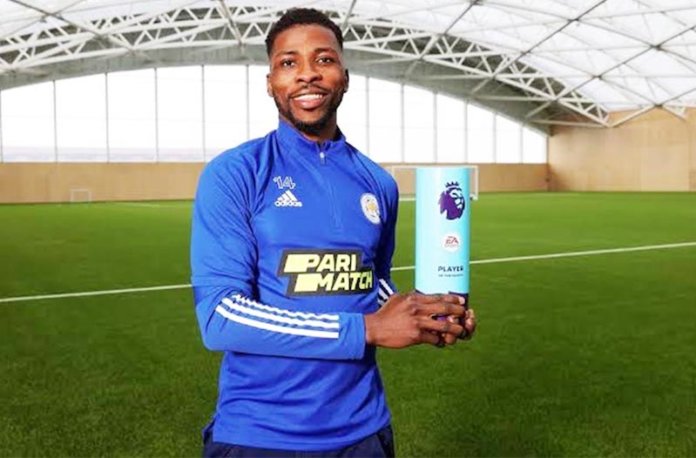 Kelechi Iheanacho has said he is excited to sign a new three-year contract with Leicester City that will keep him at the Premier League club till 2024.

“It’s a great moment and I’m happy that Leicester City gave me a new contract.

“It’s been a great time here. It’s not been easy, but there’s a lot of people here that are good people, great people to work with. They are nice people and they make me feel comfortable and welcome since I came in.

It’s been really great being here, it’s like a family. I’m happy being here and hopefully I can stay here many more years.”

Iheanacho, 24, joined ‘The Foxes’ in August 2017 from Manchester City for 25 million pounds.

He has made 117 appearances in all competitions and scored 32 goals – 12 of these goals scored this season.

He has been on super form lately which fetched him a first-ever Premier League Player of the Month award.

Iheanacho’s joy was however dampened as runaway leaders Manchester City moved to within four wins of the Premier League title as two second-half goals saw off third-placed Leicester.

In their first match since announcing club-record scorer Sergio Aguero will be leaving at the end of the season, Pep Guardiola’s free-scoring side were on course for a frustrating draw before Benjamin Mendy broke the deadlock.

Fernandinho had a goal disallowed, Kevin de Bruyne’s free-kick hit the bar and Riyad Mahrez was denied against his former club by Kasper Schmeichel’s save.

However, France defender Mendy produced a lovely curling finish after stepping inside a challenge from Marc Albrighton before Gabriel Jesus sealed the points for the visitors from close range.

Leicester thought they had taken the lead on the stroke of half-time through Jamie Vardy but his celebrations were cut short by an offside flag.

City are 17 points clear of second-placed Manchester United, who host Brighton this evening after moving onto 74 points with seven games remaining.

Guardiola’s side need 11 points to wrap up the title.