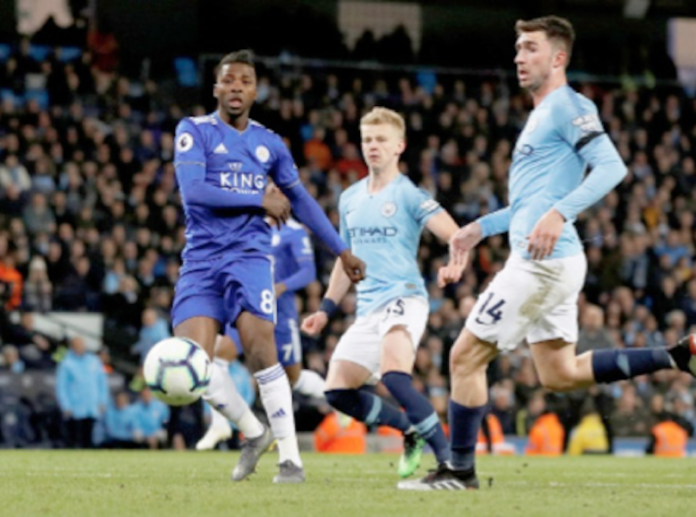 Manchester City will be hoping to get their revenge against Leicester City when both sides lock horns at the King Power Stadium in one of the stand out fixtures of the Premier League. The Foxes inflicted the Citizens’ first loss of the season after pummeling Pep Guardiola’s side 5-2. More than having revenge in mind, City would be aiming to solidify their position at the top of the log. While a victory for Leicester would put their top-four ambition in good stead, the fixture also presents in-form Nigeria striker, Kelechi Iheanacho a chance to hunt his former pay master

First takes on third in the Premier League this evening as leaders, Manchester City make the trip to fellow in-form side Leicester City.
Man City have won four in a row in all competitions and remain on course for a quadruple, while Leicester have won three on the spin and are also battling on multiple fronts.

Just 16 games stand between Pep Guardiola’s side and a piece of English football history as they attempt to win a clean sweep of domestic and European honours.

The Citizens do not even necessarily have to win all of those games, either, especially given that they boast a 14-point lead over Manchester United in the Premier League.

At the end of the weekend, it may well be that Leicester will be the Citizens’ biggest title threat, with the Foxes just a point behind second-placed Man United.

Winning the title is not the aim for Leicester this term, of course, but rather finishing above some heavyweight clubs to secure a top-four spot and Champions League football.

The Foxes have defeated Brighton & Hove Albion 2-1 and Sheffield United 5-0 in their last two league games to recover from a recent wobble.

‘Brendan Rodger’s men are also in the semi-finals of the FA Cup, where Southampton await, after beating Manchester United 3-1 in their last match before the international break. Leicester certainly have momentum on their side and plenty to play for over the remaining seven weeks of the season, and the same is very much true for their opponents.

Man City’s record winning run may have been ended in a 2-0 loss to Man United last month, but they responded to that with wins over Southampton and Fulham in the league.

With a fifth title in 10 years as good as wrapped up, next week’s Champions League quarter-final first leg with Borussia Dortmund may well take priority for Guardiola.

There is also the small matter of the upcoming EFL Cup final with Tottenham Hotspur, plus an FA Cup semi-final with Chelsea, in what will be a defining few weeks.

A huge run of fixtures begins with this trip to the King Power Stadium today and three more points in the East Midlands would be the perfect way to keep the momentum going.

Meanwhile, another blockbuster tie to kickstart proceedings after the latest international break takes place at the Emirates Stadium today as Arsenal play host to Liverpool in the Premier League.

Two places and four points eparate the two faltering sides in the table as things stand, with Liverpool currently occupying seventh spot while the Gunners languish in ninth ahead of their 30th league match of the campaign.

‘Mikel Arteta’s men head into this game on the back of a pulsating 3-3 draw with West Ham United, while Jurgen Klopp’s side overcame Wolverhampton Wanderers 1-0 before the international break.

While the spirit and tenacity of Arteta’s men in the second 45 must be applauded in the game against West Ham, Liverpool’s famed attackers will enjoy a field day if their hosts endure an equally woeful start to the game today.

Arsenal have now gone 12 games without a clean sheet in all competitions since holding Manchester United to a goalless stalemate back in January.

The Gunners also progressed to the quarter-finals of the Europa League, but even that was not without its disappointment as Olympiacos claimed an inconsequential 1-0 win at the Emirates, and with only three wins to boast from their last nine top-flight matches, any hopes of a top-four finish will be all but extinguished if they fail to come up trumps here.

With a whopping 25 points separating Liverpool and Manchester City, it would take a collapse of catastrophic proportions for Guardiola’s side to somehow lose their grip on the crown now, and even Klopp himself has admitted that a Champions League berth is almost impossible for his side at this stage.

As is the case with their hosts Arsenal, who will be striving for Europa League glory, Liverpool’s hopes of success in Europe are still very much alive as they eased to a 4-0 aggregate victory over RB Leipzig in the Champions League last 16, although they must now overcome serial winners, Real Madrid in the quarter-finals to have a shot at lifting the trophy.

The fortress that was once Anfield has seen its walls crumble since Burnley ended Liverpool’s astonishing unbeaten home record in January, but Liverpool have enjoyed far greater success on their travels, as they are currently on a three-game winning streak away from home across all competitions – keeping a clean sheet on each occasion – and four of their last five away outings in the league have ended in victory.a

Furthermore, Klopp’s team have lost just three of their last 18 away matches continentally and domestically, and with all five of Liverpool’s most recent top-flight victories coming on the road, the Reds could match a 65-year-old club record if they prevail at the Emirates this weekend, as their six victories between February and August 1955 all came on rival turf.

On the other hand, Liverpool have only come up trumps in two of their last eight Premier League matches – losing the other six and interestingly, only one team has found the back of the net in Liverpool’s last seven fixtures since Leicester City beat them 3-1 on February 13.

As injuries continue to bedevil Klopp, the former Borussia Dortmund manager would see his side rise to fifth if their endeavours in the capital prove successful, although Chelsea are certainly expected to steer clear in the race for a top-four spot when they do battle with West Brom earlier in the day.