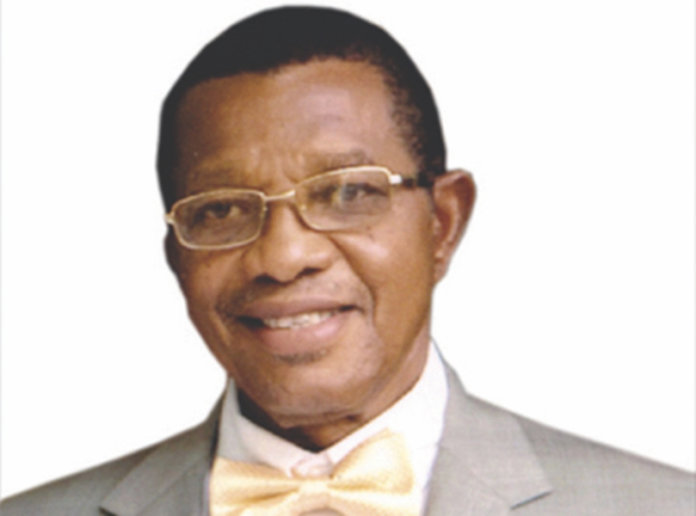 We all die. The goal isn’t to live forever. The goal is to create something that will. Alas, it is not length of life, but depth of life that really matters. On Friday the 29th day of January, 2021, time froze for the people of Umuka, Okigwe, and indeed Nigeria at large as the news of the demise of a most revered and illustrious son broke. OmereOha 1 of Okigwe is no more!
Born on the 10th day of July 1951, in the hilly academic town, Umudike Umuahia, Engr. Emeka Ekwebelem was the first child of late Chief Gabriel EkwebelemOkwara of MaduagbiDikeogu family, Umulaba clan of Umuka, Okigwe and late Madam Angelina NwanyiwunwaEkwebelem (nee Anyanwu) of Abam, Dikenafai all in Imo State. As the first son/child, his birth brought great joy to both his paternal and maternal families hence the name Chukwuemeka! (God has done a great thing).

“Okpara toro n”uloanaghi ama ihe” (A first son that doesn’t travel out to gather experiences may not be learned and wise). These great words repeatedly said to young Emeka by Chief Ekwebelem, his father, shaped his academic life.

Despite the love and attachment his father had for Emeka, he sent him off to Port Harcourt in the care of a trusted mentor, Engr. Albert Okonkwo to conclude his primary education at St. Michaels Primary School Rumuomasi, Port Harcourt, Rivers State where he passed with distinction, especially in Mathematics. In fact it is worth noting that his mentor taught him mathematics and this guided his career choice later in life as we all have witnessed.

Earlier, he had started his academic pursuit, first at St. Ann’s Primary school, Ahiaeke, Umuahia, then did one year at St. Theresa Primary School, Okigwe before continuing at St Paul’s Primary School, Owerri
Emeka proceeded to National High School, Arondizuogu, Imo State for his secondary education. The brilliant Emeka gained admission to the Institute of Management and Technology (IMT) Enugu where he studied Electrical/Electronic Engineering and graduated in 1977 as one of the Pioneer graduates in Electrical/Electronic engineering in IMT Enugu
Later in further pursuit of academic excellence, Engr Emeka Ekwebelem in 1996 sat for and passed the prescribed professional qualification Examination of Nigerian Society of Engineers and was admitted as a member of the Nigerian Society of Engineers (MNSE).

Between 1977-1978 during his NYSC year, Engr Ekwebelem kicked off his engineering career with NEPA. History has it that he took part in the construction of the first five mega watts Power Station in the old Niger Delta.

From NEPA, he moved to Nigeria Engineering Works Port Harcourt between 1978 and 1980 there he worked as a Production Engineer as well as Quality Control and later as a development Engineer. From 1980 to 1986 Ekwebelem was one of the pioneer engineers employed by the then Imo State Government who built the International Glass Industries Aba.

In 1987, in a rented apartment at 16 Brass Street, Aba, Karisto Industrial Systems was born. A foremost indigenous electrical technology company with two proprietary patents and design rights awards of the Federal Republic of Nigeria, the brainchild of Engr Emeka Ekwebelem, a culmination of his years of experience in engineering and technological ingenuity.

Karisto Industrial Systems Limited which presently has a large factory located at KM1¹/² Aba -Umuahia expressway, produces electrical switch gears and control systems, which he designed, developed and commercialized. He has no foreign technical partner.

Engr. Ekwebelem received numerous awards and titles, both spiritual and Temporal for his numerous contributions to the society. These include the Nigerian Society of Engineers merit award in 2000 and the National Productivity Order of merit award Federal Republic of Nigeria 2001.

From 1999 to 2007, late Ekwebelem was, for two consecutive tenors, the Chairman Governing Council, Alvan Ikoku College of Education, Owerri. He was a former President-general of Okigwe League and also Patron, Okigwe Town Development Union.

The history of Umuka and Okigwe would not be complete without mention of the numerous contributions of Chief Emeka Ekwebelem to his people. In 1992, Omereoha constructed a borehole water scheme and reticulated it to the entire Umuka village free of charge. He also setup a scholarship fund for the less privileged sons and daughters of Umuka. He attracted a former Governor of Imo State to construct Umuka road.

Late Ekwebelem was a philanthropist who touched so many lives within and beyond his community. These and many more deeds earned him the title “OzoOmereoha” a member of NzenaOzoOkigwe.

Indeed Emeka Ekwebelem was a much reverred illustrious son of Okigwe, little wonder HRH Eze B. S. Ezuma gave him the title Omereoha 1 of Okigwe.
Late Ekwebelem was a Papal Knight of St. Gregory, a lofty attainment for a truly dedicated Catholic. He was also a Chevalier of Knight of St John International. (KSJI). His numerous services and contributions to the Catholic Church include: The chairman of the building/project committee for Immaculate Conception Cathedral Complex under Bishop Anthony Ekezie lluno. During his chairmanship, this complex was cleared and construction work was commenced. He also engaged an architect and paid him to assist His Lordship Anthony Iluno to establish the different structures in the master plan.

In his community, he took over the building of St. Anthony’s Catholic Church, Umuka, with his wife after the foundation and completed the church building in 2007 including the furnishing and installation of pews, fans and the altar. The church was opened in 2007 with a pontifical high mass celebrated by three Bishops – His Lordship Most Rev. S. A. Amatu, His Lordship Most Rev. A. E. Iluno and His Lordship Most Rev. V. V. Eze Onyia of Aba Diocese
Later he organized a fund raising with his friends and raised the 80% of the fund required to build the Rev. Fathers house to qualify the Parish-in-building to become a full-fledged Parish with Rev. Father Boniface Osuafor as the first Parish Priest.

He was very active in developmental activities of the church in Aba Diocese. He was also the 2nd Vice Chairman of the Diocesan Pastoral Council at one time.
Late Ekwebelem was very active in politics. He was a pioneer member of PDP and contributed immensely to the successes of the party in Imo State. He was a member of Aba Sports Club and also made his contributions to the progress of the Club. He loved golf very much and was indeed a good golfer. He was at one time, the Captain of Golf section of the Club.

Engr Emeka Ekwebelem was married to lovely Barrister Lady Ezinne Ekwebelem. They are blessed with four children, and one Grand Son. He was every woman’s dream husband. A loving and caring husband and father who gave his all to his family.

From the very many tributes all over the country in honour of Karisto, there is no doubt that he left indelible footprints on the sands of his time, distinguished Senator Hope Uzodinma, Governor of Imo State requested us to be consoled by the fact that he lived a fulfilled life and left worldly legacies of hard work and selfless service in the Family, Church, Community and the Nation in general. For Rt. Hon. Emeka Ihedioha CON, KSC former Governor of Imo State late Ekwebelem was known for his forthrightness in all his engagements and one whose opinion was always more or less the objective consensus in most matters”. Prof. Maurice Iwu, former INEC Chairman described him “as a blessing to Okigwe people in many ways and without any doubt whatsoever one of our best and brightest”.

For Chief Engr. Emmanuel Iwuanyanwu, CFR, KSC, Ahaejiejemba Ndigbo, he was as a colleague, “I can say he was a very brilliant and successful engineer who was very dependable and outspoken, and was passionately committed to the welfare of the people of Okigwe”. Chief Charles Ugwu, a political leader in Imo state and PDP Chairman in the state describes late Ekwebelem “as a man of honour, trustworthy, disciplined, and selfless with no greed in him”. There are many more which space cannot accommodate here.

A vigil mass was held for him at C.K.C premises Aba on March 23, 2021, Service of Songs at Aba Sports Club on March 29, 2021 while Departure Mass will be held in his honour on April 6, 2021 at C.K.C Aba at 10am. There will be social wake keep for him later in the evening of the same day at Technology House, Umuka Okigwe. His remains will be laid to rest on April 7 2021 after Requiem Mass at St. Anthony’s Catholic Parish, Umuka, Okigwe.

No one is actually dead until the ripples they cause in the world die away.

Sir Emeka Ekwebelem the ripples of goodnesses, kindness and technological ingenuity you caused will never fade nor die as you live on in our hearts. You will be sorely missed by everyone. May God grant your loving soul eternal rest in the bosom of the Lord.
Pix: Ekwebelem.jpg

QUOTE: No one is actually dead until the ripples they cause in the world die away. Sir Emeka Ekwebelem the ripples of goodnesses, kindness and technological ingenuity you caused will never fade nor die as you live on in our hearts. You will be sorely missed by everyone. May God grant your loving soul eternal rest in the bosom of the Lord