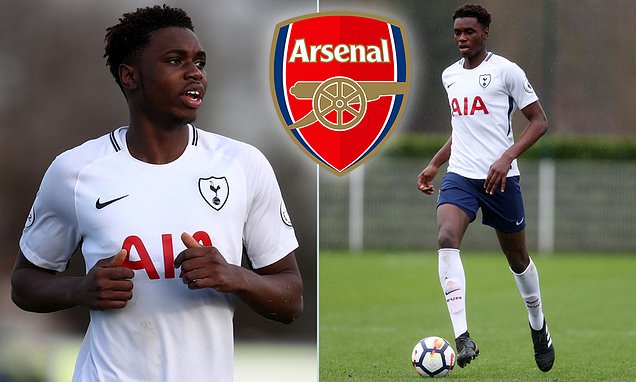 With several of Arsena first team players on international duties, Arsenal manager Mikel Arteta has promoted Nigerian-born central midfielder Tim Akinola to first team training. The onus is now on the19 year old to cash-in on the situation and win the heart of the Spaniard before the arrival of the ‘big boys’

As many as 12 Arsenal first team players are currently on international duties with their respective nations, so to make up the numbers the Spanish football tactician invited some promising youth team players to train with the first team yesterday.

Akinola transferred to Arsenal from Huddersfield Town last summer and has been compared to Chelsea midfielder N’Golo Kante.

He was joined in the workout held at London Colney by another talented youngster of Nigerian descent in Folarin Balogun.
Akinola rubbed shoulders with the likes of Héctor Bellerín, Rob Holding, Gabriel, Willian, Alexandre Lacazette and Gabriel Martinelli during the training session supervised by Arteta.

The Anglo-Nigerian has been a very key player for Arsenal in the Premier League 2, featuring in all their matches with the exception of the 3-3 draw with Manchester United in October and figured in all their games in the EFL Trophy.
Akinola has often trained with the Arsenal first team but has yet to make a matchday squad for domestic competitions and he’s ineligible to represent the north London club in the Europa League.

Akinola was Arsenal fifth permanent signing last summer having signed from Huddersfield Town youngster Tim. The 19-year-old has joined the Gunners’ Under-23s side after being released by Championship club Huddersfield last month.

The Gunners made the decision to sign the teenager because of the club’s desire to add “development players” to their ranks, to not only strengthen the club’s academy but to potentially one day blossom into a first-team player at the Emirate Stadium.
The addition of Akinola is similar to that of George Lewis, who joined the club earlier this summer from Norwegian club Fram Larvik.

But why would Arsenal, who agreed to sign Akinola without even taking him on trial, be so keen to sign a player that has just been released by a club that was flirting with relegation in the Championship for the majority of the 2019/20 campaign?
Akinola is a 19-year-old central-midfielder that has just joined Arsenal following an exit from Huddersfield.

Unlike most footballers these day, Akinola, with respect, was a late starter. He didn’t manage to get his foot in the door at any club at academy level until the age of 16-years-old, joining League Two side Mansfield Town.
Ahead of the 2018/19 season, Akinola made the switch to Lincoln City, who were seen as a club on an upward trajectory at that point, as they scooped the League Two title that season.

His time with the Imps saw him join their local rivals Lincoln United on loan, testing himself in the eighth-tier of English football. He also featured for City in the FA Youth Cup, playing against West Bromwich Albion.

In June 2019, Akinola was offered a trial at Huddersfield following their relegation from the Premier League and he jumped at the chance to test himself in the Championship. He was offered a one-year deal with the option to extend it.
However, despite giving it everything he had got, he left the club at the end of the 2019/20 season because of the sheer level of competition within the Terriers’ academy.

His departure from the West Yorkshire club means that Akinola, who has operated as a winger in the past, has been signed on a free by the Gunners, with the club not having to shell out any compensation.

Nowadays in football, standing still means that you are going backwards.
Clubs are always on the hunt for the next rising talent that could be a future star for them or potentially a gateway to a huge transfer fee, as they sign them cheap, develop them and then sell them on for a tidy profit.

But with the Gunners having failed to agreed terms with youngster Nathan Tormey already this summer, they are going to be eager to keep their academy topped up with exciting talent.

Though Akinola has not yet been able to make a name for himself at first-team level, getting the chance to do that at Arsenal, surrounded by a plethora of exciting young talents, could bring the very best out of him.

After signing for Huddersfield a little over a year ago, Leigh Bromby, who is now the Terriers’ Head of Football Operations, outlined why the West Yorkshire club were so keen to get him on board, lavishing his attitude and work ethic with praise.
“We’re delighted to be able to welcome Tim to Huddersfield Town today,” Bromby said.