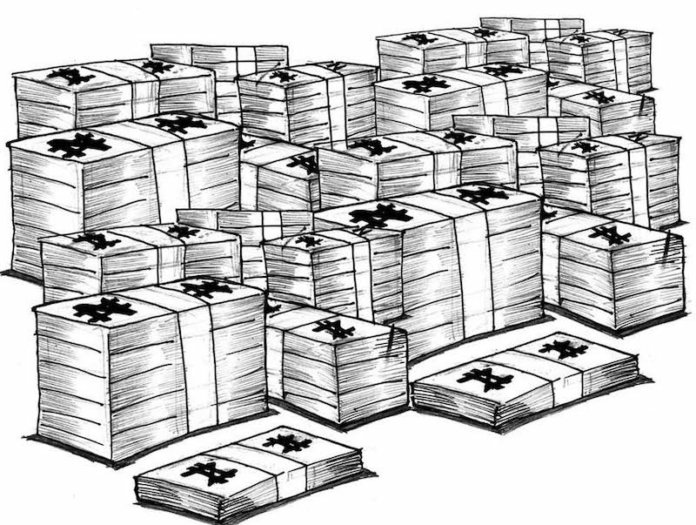 Despite the Central Bank of Nigeria’s threat to arrest and arraign before mobile courts those who spray Naira notes at parties and people who habitually deface the national currency, the sordid practices have continued. And the culprits most often are members of the business and political elite who seem to be above the law. Yet given the level of the abuse and how prevalent these practices have become in recent times, the cost to the economy is enormous. The egregious handling of Naira notes by users leads to the large stack of mutilated or dirty currencies that have to be constantly replaced.

Sections 20 and 21 of the CBN Act of 2017 outlaw any action by anyone who hawks, sprays, squeezes, dances on or writes on the Naira. Culprits convicted by the mobile courts deployed nationwide to enforce the law risk a jail term of about six months or payment of N50,000 fine. But because nobody has ever been penalised for this infringement of the law, politicians and business people openly abuse the currency while holding naming, birthday, burial or wedding ceremonies.

Meanwhile, the CBN has had to explain the implications of some of these sordid acts even though many Nigerians still do not get the message. “We spend a lot of money printing these bank notes. If we print a N500 and issue it to you on Friday, on a Saturday you might probably take it to a wedding for spraying… by Monday, it is already old and mutilated. It is so unfortunate,’’ the CBN once lamented. But the fact that nothing has ever been done to bring culprits to book explains why the practices continue.

The wanton mutilation and careless handling of Naira notes is indeed a serious infraction. The implications are quite obvious. Currency notes that are poorly handled get defaced and as people do not like worn-out money, they reject them when they are given. Money which government can use for other projects is then diverted to print new notes to replace bad notes.

Meanwhile, given the volume of worn-out currency in circulation, CBN should not hesitate to sanction money deposit banks (MDBs) across the country for recirculating dirty Naira notes, when their obligation is to sort the money, mop them and return them to the CBN vault. In case many people are not aware, filthy notes in circulation predispose people to many health risks, including upper and lower respiratory tract infections, conjunctivitis, protozoa infections and allergies because such currencies can carry germs that make people feel unwell due to handling. This is unacceptable in a country where the health indices are among the worst in the world.

However, it is important to deal with the issue of disrespect for our national currency which manifests in the manner business people, politicians and ordinary citizens handle the naira at parties. There is also an urgent need for the CBN to upscale its public awareness campaign because the mass of our people, particularly the taxi drivers, market women and street beggars still need reorientation on how to properly arrange money. The way we handle money is the reason why we have many dirty Naira notes in circulation. And considering the enormous cost of printing these currencies at a time of lean resources, it is time Nigerians were made to stop this bad habit of abusing the Naira.

Considering the enormous cost of printing these currencies, it is time Nigerians were made to stop this bad habit of abusing the Naira