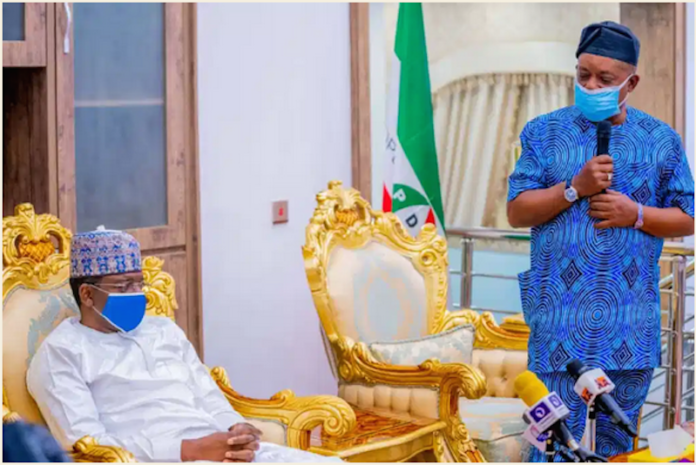 •Revolt looms over dominance of returnees

The National Working Committee (NWC) of the Peoples Democratic Party (PDP) is to set up a technical committee to review the report of the Bauchi State Governor, Senator Bala Mohammed’s, committee, which recommended that the 2023 presidential ticket of the party should be thrown open to the six geopolitical zones of the country.

Mohammed’s committee was set up by the main opposition party to find out why it lost the 2019 general election.
In its report, the committee recommended that even though there was a clamour for the 2023 presidential ticket to be zoned to the North-east and South-east, it should, however, be open to the entire six geopolitical zones.

South-east and South-south leaders have since rejected the recommendation and insisted that power should shift to the South in 2023.
However, THISDAY learnt last night that a revolt by some members who regard themselves as loyalists of the party is in the offing against the PDP leadership over what they call its sellout to the returnee members who had left the party to pursue their ambitions elsewhere but came back after their wishes met a brick wall.

They referred to the former presidential candidate of the party in the 2019 general election, Alhaji Atiku Abubakar, and the former President of the Senate, Dr. Bukola Saraki, who had left the party for the All Progressives Congress (APC) in the pursuit of their aspirations only to return when they had been worsted in the APC.

“We feel taken for granted,” said an aggrieved member. “How could they yield the party’s privileges to these turncoats at the detriment of those of us who remained in the party through thick and thin? We won’t agree.”

Sensing the impending upheaval, said a reliable source, the NWC wants the technical committee to look at the panel’s report, which the agitators feel panders to the wishes of the said returnees, and advise the party on the vexed issues raised in the report.

The source, who requested anonymity because he was not authorised to speak because of the sensitive nature and the controversy the report has generated, said: “The party is aware of the perception of Nigerians and, therefore, will subject the report to serious scrutiny and will come out with what is in the PDP’s interest and the expectations from Nigerians.”
According to the source, “The technical committee will study the report and pass its findings to the NWC, which will in turn send it to the various organs of the party.

“The report is, to say the least, a recommendation. There are other important issues in the report that we need to study. Basically, the report of the committee, which is a product of the National Executive Committee (NEC) will eventually be sent to the NEC.
“Apart from the NEC, we have the Board of Trustees (BoT) of the party; there is the PDP Governors’ Forum. We have the committee on Reconciliation and Strategy headed by the former Senate President, Dr. Bukola Saraki.
“There would be consultations with the various organs and I can assure you that a decision of the NEC would be needed. NEC is the final decision-making body apart from the NWC.”

“There is the role of the judiciary during elections and electioneering campaigns and how to ensure the neutrality of the judiciary and what role, expected of these organs during the electioneering period.
“So, the throwing up the presidential ticket to all the zones is just one out of the various recommendations that the NWC has to study. Thereafter, we will approach the NEC, which has the final say on these matters.”

Explaining that PDP is still afar on how its presidential ticket holder will emerge, it added: “On a final note, all our organs will make their contributions and at last, the NEC or the national convention will decide on what best is for the party.”
The secretary of the panel, Dr. Emmanuel Agbo, had said over the weekend that the report did not exclude the South and indeed the South-east from contesting the presidential ticket of the PDP.

Rather, he said, the panel is looking for a nationalist and not a regional leader that would pull Nigeria out of its present predicaments. He repeatedly stated that the south-east was not excluded in its report.
However, the PDP had said severally that the report of the committee is not final and still subject to study and approval by the relevant organs of the party.

According to the National Chairman, Prince Uche Secondus, the party is going to study and analyse the report meticulously and come up with a position that will be beneficial to the party.
Also reacting through his tweeter handle, the National Publicity Secretary, Mr. Kola Ologbondiyan, said: “Due to enquiries from our members and the general public, it has become imperative to clarify that @OfficialPDPNig is yet to adopt any of the recommendations proposed by Senator Bala Mohammed’s Committee on the Review of the 2019 Elections.

“As such, it will be incongruous for anyone to assert that any decision has been taken @OfficialPDPNig on the zoning of the presidency ahead of the 2023 elections.
“@OfficialPDPNig leaders, members and supporters are enjoined to note that the party is yet to take any decision on the proposals presented by the committee.”