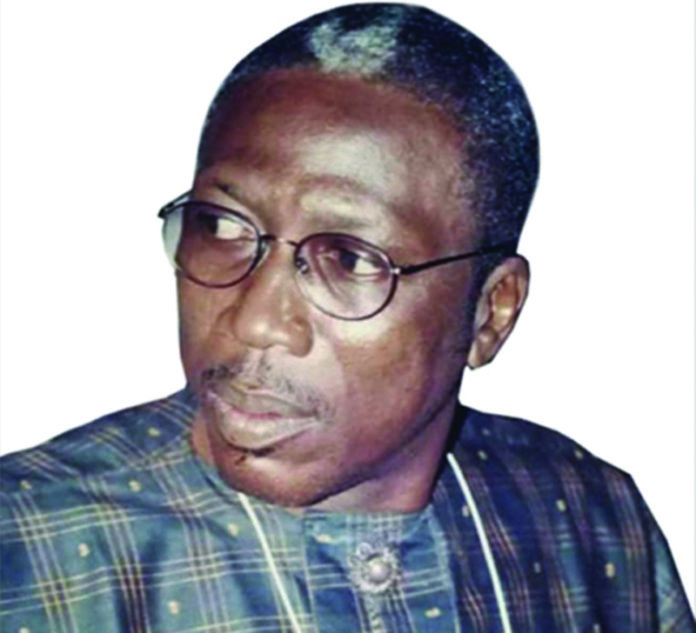 Tragedy struck the Egbuna Family in Adagbe Avomimi Village, Enugwu-Ukwu, Anambra State in the early hours of Saturday, January 30, 2021. That was the day our father and mentor, the motivational speaker, a foremost Enugwu-Ukwu patriot, a social mobiliser, initiator and executor of worthy causes passed on. Since then it was as if the entire world had collapsed on us and we were in total darkness. But given the fact that in his 71 years of life on earth, he lived and exemplary Christian life and left for us noble legacies. We thank Almighty God for the worthy life he lived, as attested to by many friends, associates and colleagues. We are consoled by these messages of sympathy, condolence and support.

Mr Ben Ndubisi Egbuna was born into the family of Mr. and Mrs. Peter Nnaemeka Egbuna on 13th July 1949. He was the first son and had 9 siblings (5 brothers and 4 sisters). He started his educational pursuit at St Anthony’s Primary School Enugwu-Ukwu, Anambra State, in 1955. As the son of a dedicated police officer whose expertise on the job was sought by every police command in the country to help combat crime and make the community a safe place, together with the entire family, young Ben Egbuna often moved from one city to another, changing schools as the journey went by…. From Sapele to Warri to Enugwu and finally to Lagos where he completed his primary school education in 1962.

In 1963, he enrolled in Gaskiya College Lagos State for his secondary school education but soon after changed to Iganmode Grammar School Otta, and then to Lagos City College Sabo, Yaba, Lagos State. In Lagos City College, he was quickly discovered to be very skillful on the football pitch and enrolled into the school football team. He also discovered and nurtured his artistic flare and gift in this school and proved to be very good at drawing, painting and wood carving.

However, in 1966 his secondary school education was temporary halted as a result of the political situation in the country then, resulting in the Nigerian Civil War of 1967 to 1970. He returned to his roots in the Eastern Region of Nigeria where he enrolled in the Biafran Army and fought in the Nigerian Civil war which lasted from 6th July 1967 to 15th January 1970. At the end of the war, he went on to complete his secondary school education at St Michael’s Secondary School Nimo, Anambra State, where he obtained his West African School Certificate (WASC).

After completing his secondary school education, Ben got employed as a Postal Assistant in the Post and Telecommunications Department of the Nigerian Postal Service in Lagos. Due to his commitment and diligence, he was immediately discovered by the Postmaster of the General Post Office Marina. He was sent for the Junior Postal Officer’s Course and soon began handling greater responsibilities at the Parcel section and the General Counter of the Ebute Metta Post Office.

In 1973, he began his beloved Broadcast Journalism career as a News Assistant Trainee at the Nigerian Broadcasting Corporation. In the course of his career, he travelled far and wide around the world to get raw data from the field, not minding the challenges and dangers ahead. His passion for the job made him always chase after the truth. He literally covered the length and breadth of his home country, Nigeria, while performing his duties.

On the international scene, he journeyed through Tanzania, Zambia, Zimbabwe, Chad, Senegal, Namibia to the United Kingdom, West Germany, Canada, The Bahamas, and after every assignment, he was always praised for being “incisive, industrious and professional”. Within the Federal Radio Corporation of Nigeria which was under the umbrella of the Nigerian Broadcasting corporation, He rose through the ranks from a Newsreel Reporter to Principal Editor, to Head of Special Programmes Unit and then to Head of the Reportorial Unit.
In between his broadcasting career, he was awarded a bachelor’s degree in Mass communication by the University of Lagos in 1984. In 1990, he was transferred to Voice of Nigeria (still under the Nigerian Broadcasting Corporation) and in 1991 he assumed the post of the Controller News. He was later elevated to Manager News in 1992. In 1995, he was promoted to Assistant Director News and in 1999 he became the Deputy Director of News.

He got promoted to the Head of the News Directorate and soon rose to the position of the Executive Director News of Voice of Nigeria in 2005, a position he pioneered at the corporation.
Late Egbuna returned to the cradle of his broadcasting career when he was appointed as the Director General of the Federal Radio Corporation of Nigeria, the largest radio network in Africa, in 2006. After an eventful, intriguing, groundbreaking and memorable 35years of public service to his beloved country, Egbuna retired in 2008 as a well decorated, fully accomplished broadcast genius, leaving behind a trail of major achievements, milestones and a spotless record to his name.

Egbuna was very committed to his professional development. In 2001 he participated in the Senior Executive Course 23 at the National Institute for Policy and Strategic Studies Kuru Plateau State where he was awarded the prestigious Member of the National Institute aka MNI. In 2003, he was made a Fellow of the Nigerian Guild of Editors and was also a member of the Nigeria Union of Journalists. He was a member of the Central Working Committee of the Broadcasting Organisations of Nigeria, as well as the President of the African Union of Broadcasting (AUB) from 2006 to 2008.

Ben Egbuna was fully involved in grassroots development activities in his hometown Enugwu-Ukwu. He was a patron of the Enugwu-Ukwu Community Development Union (ECDU), Secretary ECDU Peace Committee and a pioneer member of Enugwu-Ukwu Forum Lagos. He was also a member of the Abomimi Community Development Union. He was the Chairman of the electoral panel that organized the election of the Jude Ekwunife led executive of the ECDU in 2009. It was this executive that organized the peaceful process that led to the election of His Majesty Igwe Ralph Obumneme Ekpeh, Eze Enugwu-Ukwu na Igwe Umunri and ascension to the throne in 2011.
He was Member of Building Committee of Saint Dominic’s Catholic Church, Yaba, Lagos between 1993 –1997, Member of building committee of Saint Stephens Catholic Church, Iwaya, Lagos State between 2005 – 2006.

Ben Egbuna and 3 other parishioners championed the building of the priest house for St Ben’s Catholic church, Adagbe Avomimi, Enugwu-Ukwu, Anambra State. The building of the parish priest house led to the attainment of a parish status for St Ben’s Catholic Church, Adagbe Avomimi, Enugwu-Ukwu.He was also a proud member of the Catholic Men’s organization in St Domnics, St Stephen and St Ben’s parishes.
On April 7, 1980, Ben got married and as of the time of his death, Ben Egbuna had been married to his beloved wife Beatrice Uchenwa Egbuna for 40 years. Their marriage is blessed with four (4) children; Chukwuemeka Uchendu Egbuna, Chiedozie Jideofor Egbuna, Chinelo Maudlyn Abajuo and Chukwuka Maduabuchi Egbuna. He is also blessed with 7 grandchildren.
From the galore of tributes in memory of our dear father sent to us by many eminent Nigerians, we are satisfied that ben Egbuna mni made in indelible footprints on the sands of his time.

Dr. Mansur D. Liman, Director General of FRCN, eulogized him as “a consummate broadcaster and a quintessential Journalist whose passion for excellence was uncompromising”. He affirmed that the deceased contributed immensely to broadcast journalism especially in Voice of Nigeria and Radio Nigeria and left an indelible mark. For Mr. Osita Okechukwu “When we think and talk about a great reformer, charitable and humane persons we mention Ben”, Abubakar Jijiwa MFR, Sardauna Ribadu, former Director General Voice of Nigeria and former Chairman, Broadcasting Organizations of Nigeria (BON), “in all my relationships with Ben, he always came out as a forthright, honest and hardworking colleague, with strong empathy and compassion for his staff. I relied heavily on Ben’s wise counsel, analytical introspection and critically incisive intervention. Ben was actually my barometer of judgment during stormy discourse”.

The leadership of the Nigerian Union of Journalists, VON Abuja Chapter described him as “a gem, genius, astute administrator, and a man of high moral standing. Integrity is your second name.”

What more can we add to these kind words in appreciation of our late father’s contribution to Nigeria developments.
A Service of Songs was held in his honour at the Church of Transfiguration VGC Lagos on 16th March 2021 while Requiem Mass was held at the same Church on 18th March 2021. Christian Wake would be held for him on 24th March 2021 in his residence at Enugwu-Ukwu, while his remains would be laid to rest on Thursday, March 25th 2021, after funeral Mass at Saint Ben’s Catholic Church, Adagbe Avomimi, Enugwu-Ukwu. Ben Egbuna mni, it is well with your soul.
Fare thee well Nnanyelugo.