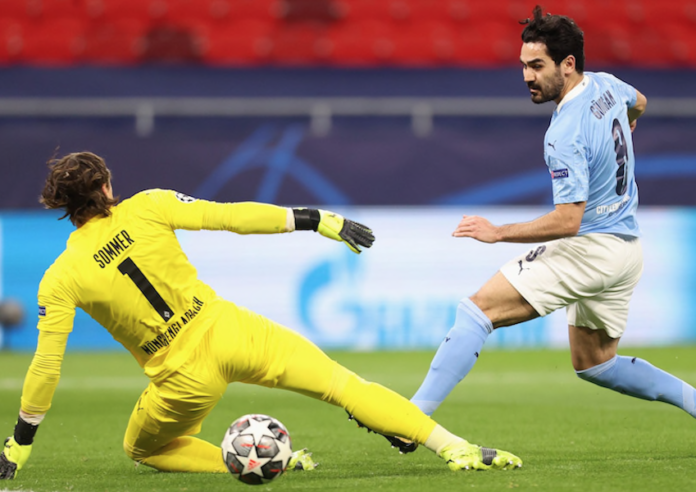 Manchester City booked their spot in the UEFA Champions League quarter-finals on Tuesday night with a convincing win over Borussia Monchengladbach – and City fans will be hoping this is finally their year.

Goals from Kevin de Bruyne and Ilkay Gundogan gave them a 2-0 second-leg win on Tuesdayto complete a 4-0 aggregate success and take them into the last eight for the fourth year in a row.

However, Champions League success has eluded them, with a 2015-16 semi-final defeat by Real Madrid – when Manuel Pellegrini was in charge – the closest they have got.

Since Pep Guardiola replaced him for the following season, City have gone out in the last 16 to Monaco, followed by quarter-final exits against Liverpool, Tottenham and Lyon.

“The first year I arrived here I was told we had to win the Champions League,” said Guardiola.

“I’m not thinking about the semi-finals. I’m thinking the first good game and the second game (in the quarter-finals). This is all I’m concerned about.”

As well as being in the Champions League last eight, City are 14 points clear at the top of the Premier League, in the FA Cup quarter-finals and face Tottenham in the Carabao Cup final in April, as they pursue an unprecedented quadruple.

But ex-City striker Paul Dickov believes the Champions League was the one the club’s Abu Dhabi owners will be craving.

If second-placed Manchester United – the only team to beat City in 32 games in all competitions – do not drop any points then the earliest City could win the English title would be on 8 May.

City have kept 26 clean sheets in all competitions this season and only conceded one goal in eight Champions League games, while Guardiola has been able to rotate his squad and rest key players.