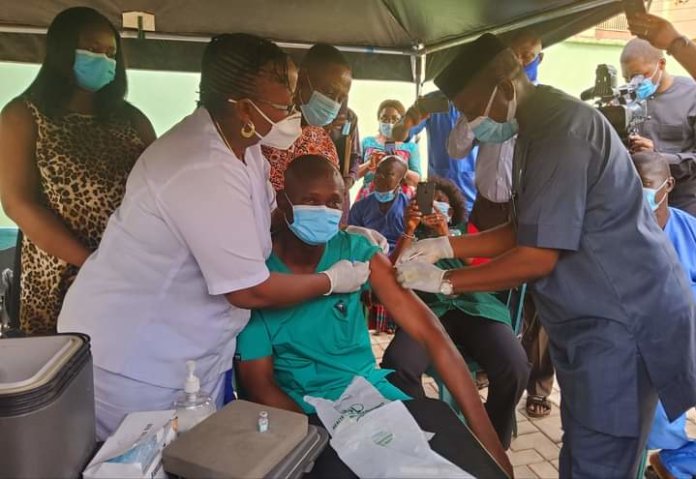 Dr. Ugwu confirmed that the state government received 65,410 doses of Oxford AstraZeneca COVID-19 vaccines.
The Executive Secretary disclosed that his agency was ready for the vaccination and had trained the health personnel that would administer the vaccines, among other preparations. He revealed that over 102 members of the team would handle the exercise in this first phase.

Dr. Ugwu pointed out that the next stage of the vaccination, after the frontline health workers, would be for key stakeholders of political, religious and traditional institutions.

He explained that the first phase of the vaccination was also going to be focusing most on other health workers beyond the frontline health workers because of their vulnerability to diseases in the health establishments where they work.

The State Commissioner for Health, Dr. Emmanuel Ikechukwu Obi, had announced, when the state government took delivery of the vaccines, that vaccination would take place in four phases, explaining that the first phase would be administered effectively to frontline health workers, elderly people with underlying illnesses, and some key stakeholders in the state, among others “as already identified and announced in the news”.

Also speaking at the vaccination exercise, the Health Commissioner, Dr. Obi, narrated that the first set of the frontline health workers who received the vaccines, particularly Dr. Chikezie Obasi and Dr. Okechukwu Ogbodo, started work on March 27, 2020 as first responders to the first two cases reported in the state.

Dr. Obi noted that the workers put up a brave fight, which he said was fruitful. Other frontline workers who received the jabs include a nurse, Nnenna Eze and Chidi Ikekpeazu.

Responding on behalf of others, Dr. Ogbodo thanked Gov. Ugwuanyi for his commitment to the fight against COVID-19 in Enugu State, stressing that “the experience of being the first person to receive this vaccine in Enugu State is overwhelming”.

He encouraged the people of the state to take the vaccine saying: “I can tell you that almost 30 minutes after taking the vaccine I am hale and hearty; no reaction. So I want to encourage everybody in Enugu State to come and take this vaccine”.