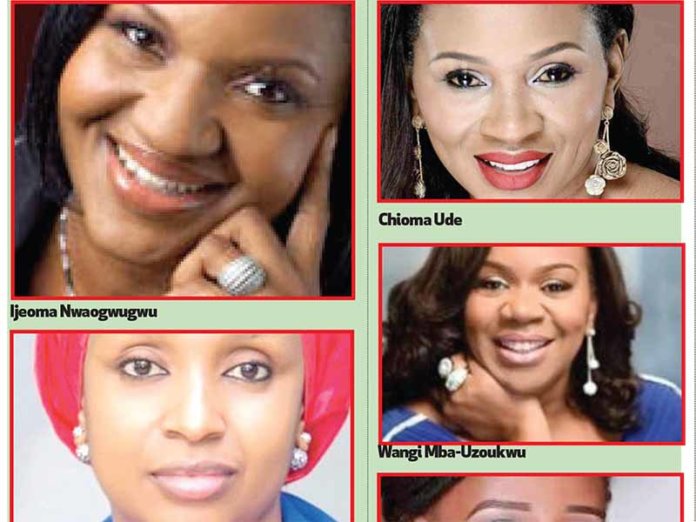 As the world marks International Women’s Day on March 8, Vanessa Obioha profiles outstanding Nigerian women who have taken up the challenge and are blazing the trail in their careers

Representation of women in the top echelon of media organisations is still relatively low. The Managing Director of Arise TV is one of the few women in journalism who has effectively shown their worth over the years. Nwaogwugwu was one of the pioneer staff of THISDAY Newspapers before climbing the rungs to become the paper’s executive editor. During her tenure, she demonstrated profound professional diligence. She was actively involved in the process of newspaper production. From the gathering of stories, editing, planning to when the paper finally goes to press, she knows the process like the back of her hands.

To her credit, she is the only editor (to date) to have edited all three newspaper titles, starting with the Saturday edition. She went on to edit the Sunday edition and, finally, the daily title. She is the second woman in Nigerian journalism’s history to be appointed editor of a national newspaper, the first being Doyin Abiola.
In 2018, she was appointed to lead the Arise News Channel, the broadcast arm of THISDAY Newspapers, where she is also setting trends and making the TV station a go-to place for authentic and up-to-date information.

The daughter of the late academician and historian Bala Usman, Bala-Usman grabbed headlines in 2016 when President Muhammadu Buhari appointed her to oversee the Nigeria Ports Authority. She became the first female managing director of the agency in its 66 years of existence. Until then, she was the chief of staff to Governor Nasir El-Rufai, helping to spearhead reforms in a state that badly needed rejuvenation.

The politician didn’t hesitate to roll up her sleeves and take up the herculean task to reform the agency riddled with corruption. Perhaps, one of the most laudable achievements of Bala-Usman is the launch of Eto, an electronic truck call-up system designed for the management of truck movement and access to and from the Lagos Ports Complex and the Tin Can Island Ports, Apapa, Lagos.
The app is responsible for the scheduling, entry and exit of all trucks from the ports. This development has, in a way, helped to curb the deadlocked traffic in the Apapa axis. Bala-Usman is also a co-founder of the Bring Back Our Girls (BBOG) movement.

Despite her recent controversy with the Nigerian media, Kadaria Ahmed is one of the country’s outstanding female journalists. She started her career with the British Broadcasting Corporation in London and cut her teeth in other media print, radio, online and social media. A media entrepreneur, she owns a media company Daria Media driven by the public good and closing the journalism gap.
Ahmed is exceptionally known for anchoring four live televised election process events since 2011; notable among them is her interview with President Muhammadu Buhari in the run-up to the 2019 elections. In 2020, she launched Radio Now, a radio station focused on delivering factual and unbiased news.

Featured in Forbes 2018 top 50 women, Amy Jadesimi is one of the country’s female trailblazers. Trained as a medical doctor, Jadesimi dropped her coat and stethoscope to take the reins of her father’s company, Lagos Deep Offshore Logistics Base (LADOL). Under her watch, LADOL is utilising the UN’s Sustainable Development Goals (SDGs), expanding service to sectors outside the oil industry and creating tens of thousands of jobs.
Her experience at Goldman Sachs spurred her business acumen. She was inspired to pursue an MBA at Stanford Graduate School of Business. Before her venture into the business world, she served as an Archbishop Tutu Fellow, working to reduce maternal mortality. Jadesimi was also named Young Global Leader by the World Economic Forum.

On December 18, 2015, Toun Okewale Sonaiya made history with the WFM radio station’s launch. The station is the first female-oriented radio station in Sub-Saharan Africa. With her vast experience in radio broadcasting, having worked for Ogun State Broadcasting Corporation, Ray Power and Choice FM, Sonaiya, through her platform, spotlights women and issues affecting them.
To further project the female gender as an integral part of the society that should not be overlooked, she launched the Voice of Women Conference and awards where top female personalities are recognised, and women development discussed. She is the executive director at St. Ives Communications.

One of the prominent film festivals in Africa is spearheaded by the delectable Chioma Ude. A graduate of Marketing from the University of Nigeria, Nsukka, Ude founded the Africa International Film Festival (AFRIFF) in 2010 and would have marked the festival’s 10th-anniversary last year if not for the unprecedented coronavirus pandemic.
Ude has helped young and budding filmmakers sharpen their craft and network with high-profile filmmakers and film studios in the world through the festival. The festival serves as a place to network and market ideas. Some of the international festival partnerships she secured over the years include Relativity School, Alliance Francaise and British Film Institute.

When it comes to developing and showcasing world-class local content on our airwaves, no one does it better like Africa Magic’s Channel Director, Wangi Mba-Uzoukwu. She is passionate about bringing the best African stories on screen and is one of the few women in a leadership position at Multichoice Nigeria. Her initial dream was to be a broadcaster but eventually ended up in marketing, where she kicked off her career as a Client Service Manager at Tequila Nigeria.
Before joining the media and entertainment company, she worked with multinationals such as British American Tobacco, The Coca-Cola Company, and Airtel. She also spearheaded the launch of Africa Magic Igbo and the Africa Magic Viewers Choice Awards, driven by her passion for the television and film industry in Nigeria.

Rightly called the ‘Queen of Nollywood Films,’ Peace Anyiam-Osigwe has many firsts attached to her name. She is the first to screen Nigerian films in international festivals and direct the music video of the defunct twin group P-Square. Her contribution to the growth and development of Nollywood films is almost unrivalled.
Anyiam-Osigwe founded the prestigious Africa Movies Academy Awards (AMAA) under the Africa Film Academy. A Ted fellow and a Member of the Federal Republic (MFR), she started her career as a writer at a young age and became one of the influential voices in Africa’s filmmaking industry.

In 2014, filmmaker Chineze Anyaene-Abonyi embarked on a mission to have Nollywood films compete in the prestigious global film award, Academy Awards. Despite the setbacks, Anyaene-Abonyi was relentless in her pursuit and would achieve her dream this year when a Nollywood film ‘The Milkmaid’ was confirmed eligible to compete in this year’s award.
Unfortunately, the film didn’t make the shortlist. The young filmmaker also produced the first film, ‘Ije,’ that starred actresses Genevieve Nnaji and Omotola Jalade-Ekeinde. She is a graduate of Theatre Arts and has a master’s degree in Film Directing.

The young Nigerian-British medical doctor is the brain behind Flying Doctors Nigeria Limited, West Africa’s first air-operated emergency medical services based in Lagos. She was inspired to launch the establishment after losing a loved one and her desire to see improved medical services.

She also specialised in aviation medicine, helping her to launch the medical company effectively. Brown is a co-founder of a venture capital firm, Greentree Investment Company which provides growth capital to some of Africa’s technology start-ups. Her passion for better Nigerians’ well-being led her to establish the Flying Doctors Healthcare Investment Company in 2019, a healthcare and wellness sector investment firm that brings together the investment and operational activities her team conducts in the health and wellness space. The company held its first edition of ‘The Conversation’ with the Minister of Industry, Trade and Investment, Otunba Adebayo.

During the pandemic’s peak last year, Brown and her team launched a COVID-19 mobile testing booth that helped reduce the need for as much PPE and minimise the risk of healthcare worker infections by providing a barrier between the potentially infected patient. The 35-year-old health practitioner is the editor of the International Journal of Emergency Services.